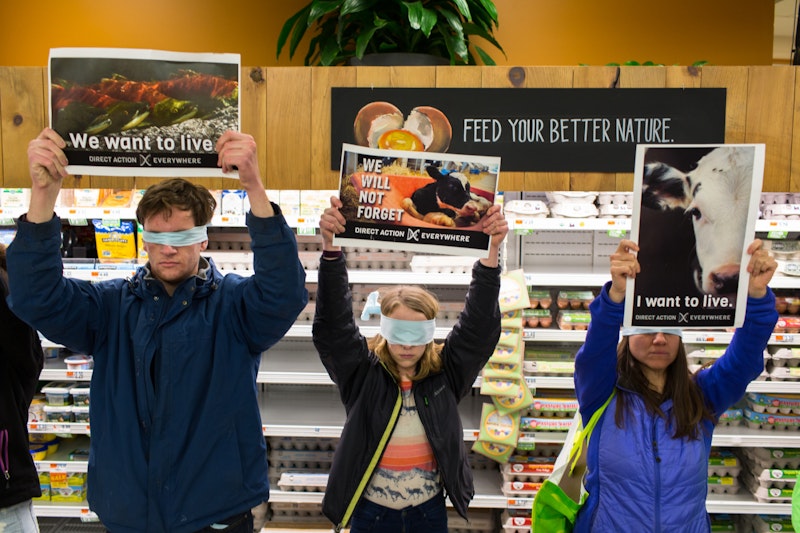 Direct Action Everywhere (DxE) is a grassroots, animal-rights organization, founded in 2013, which engages in open rescue and electoral efforts. But the group is best known for protests inside stores that threaten non-human welfare. Zach Groff, a young DxE organizer spoke with me in a wide-ranging interview that touched on the organization's strategy and the possibility of a vegan future.

SPLICE TODAY: When DxE protests inside a store like Whole Foods, is the goal to raise consciousness among customers or pressure the company to remove animal products from shelves? If it's the former, is yelling at customers the best way to raise consciousness? And if the latter, isn't a company like Whole Foods overwhelmingly more likely to remove its vegan products than its animal products—because the vast majority of its customers are omnivores?

ZACH GROFF: Our goals in going into a store are threefold: 1) to raise consciousness among customers and their social networks, 2) to pressure the company, and 3) to create more energized activists who will talk to friends and family about animal rights and veganism and engage in future activism as a result. The reason for the dramatic and disruptive approach is that it’s far more viral than a quiet, one-on-one conversation, so it's more likely to travel through customers' social networks. Content with high emotional arousal tends to spread through social networks. It's also potentially more likely to convince customers themselves, as moral outrage can be important in getting people to question systems they're a part of.

The reason stores offer vegan options is less about the number of vegans than this phenomenon in which vegan products are seen as representative of a certain kind of green, environmental store and so appeal more to certain types of omnivores. The more we challenge that presentation, the more they need to defend it by offering vegan products, and we've seen stores and other institutions make changes in response. Whole Foods has removed phrases like "Raised With Care" that used to be much more common around their animal products. There's been the first-ever criminal prosecution of a California egg farm, after we showed that farms were violating anti-confinement laws, and there are likely other effects on these stores that we don't even know.

ST: How did the Berkeley Animal Rights Center come to be? Who pays for it, and what's its relationship to DxE? Should activists in other areas seek to establish similar centers?

ZG: The Berkeley Animal Rights Center was created because DxE in the San Francisco Bay Area needed a bigger community space than an Oakland apartment, and we were looking to invest seriously in local growth here in Berkeley. A number of social scientists we spoke to—chiefly Doug McAdam at Stanford, but also people like Duncan Watts at Microsoft—were emphatic that social movements do better the more geographically concentrated they are. This is probably why cities tend to lead the way in expansion of our moral circles. We had a blog post written by DxE co-founder Wayne Hsiung when we were toying with the idea in 2015, and it received a very positive and enthusiastic response, so in 2016 we opened the center. Lots of people have moved here, and people are forming activist houses to build things up.

The center is run by DxE activists and funded by Friends of DxE, the nonprofit foundation to support DxE activism, but we offer the space to lots of groups—Seed the Commons, a local food justice group, Vegan Outreach, etc. In the future, we'd love to see other animal rights groups take part in funding and managing it, but there’s not interest at the moment, I think largely because the idea of a community space is out of alignment with what most groups are doing. Starting centers like this in other cities is a fantastic idea, and various chapters of ours are moving toward that. They're forming activist houses in New York City and Philadelphia, and our Colorado chapter is opening a Colorado Animal Rights Center in partnership with a sanctuary there.

ST: Are there any paid positions at DxE? If so, how many are there and how is it decided who gets them?

ZG: DxE has a limited number of fellowships, where activists who have shown dedication to animals and extremely good character receive a living stipend to do activism. There were three fellows this past year—myself, Priya Sawhney, and Almira Tanner, although Almira and I were only fellows for part of the year. We have details here and plan to push more heavily for applications this year. The board of Friends of DxE decides on fellowships with recommendations from the DxE Steering Committee, which is a group of representatives from DxE chapters. The basic idea is to find people who are already doing vital work, where getting rid of the day job would really free them up to do even more, particularly investigative work, which often keeps people out at night or busy at strange hours.

ST: Is DxE democratic? If a rank-and-file member in some far-flung chapter sought to change the organization's leadership, how would they do that?

ZG: DxE is an autonomous network, so chapters can do whatever they want with or without the DxE Steering Committee or any other body's approval, as long as it's in line with our values and principles and call themselves DxE. They could theoretically form their own group of chapters working together separately from the other ones. The Steering Committee, which organizes chapters who choose to work with us, has delegates from core chapters based on these bylaws and has to report to Global Team Members, who are people who spend a certain amount of time on DxE activism.

Someone in a far-flung chapter could do a few things to influence leadership. The easiest and most direct thing is just to speak up and be involved—people who attend global strategy calls and get involved in projects are heard and have a lot of influence on the network's direction. Second, they could organize their chapter into a core chapter—a chapter that does actions on a regular basis and has a team of organizers. Third, they could become a global team member and comment on strategic plans, and the DxE Steering Committee would have to respond to that. In the San Francisco Bay Area chapter, we have a formal voting process that includes the way members of the core organizing team are selected, and we'd like to extend that internationally once we make sure it's working well here.

ST: DxE published a document called "The Forty Year Roadmap to Animal Liberation," which suggests the United States could essentially become a vegan country in a single generation. It's admirably ambitious, but is the timeframe realistic—even if you factor in potentially dramatic gains achieved through innovations like in-vitro meat?

ZG: I think the 40-year roadmap is realistic. At a panel at the Effective Altruism Global conference in Boston last April, Bruce Friedrich, Jon Camp, and Sharon Nunez Gough, three leaders of significant animal welfare nonprofits, all put timeframes on the end of factory farming at somewhere under 30 years. So I think 40 years for animal liberation is quite realistic. Social change happens quickly, and we're biased to think we're further away from changes than we are—something called the end-of-history illusion.

ST: The plan initially calls for activists to move to Berkeley, CA, so as to create a critical mass of support for animals. You actually moved there from Connecticut. Is there concern, within the organization, that the plan removes the most committed and dynamic campaigners from their areas of origin, stunting local activism?

ZG: There's definitely a concern about removing dynamic organizers from their local places of origin, but we think that history and social science indicate that this concern is dwarfed by the benefits of having high-powered organizers concentrated somewhere we can work together in-person to build a massive movement. As our community grows we need more and more people to organize subdivisions—perhaps a North Berkeley Chapter and South Berkeley Chapter—and the wins we have here will inspire and organize people elsewhere, more than if we left organizers where they were.

The chapters that have had the most success, like Chicago and Colorado, have done so, in my view, by having organizers spend time in the Bay Area and learn from the Bay Area chapter. So building the strongest possible chapters in a small number of places is the best way to go. Some places are not going to take off until the movement really explodes. In Connecticut, for instance, people live fairly far apart from each other. The population—vegan and not—to draw on is small, and people are not concentrated in any place where they can influence local government. I have little doubt my impact is way higher out here.