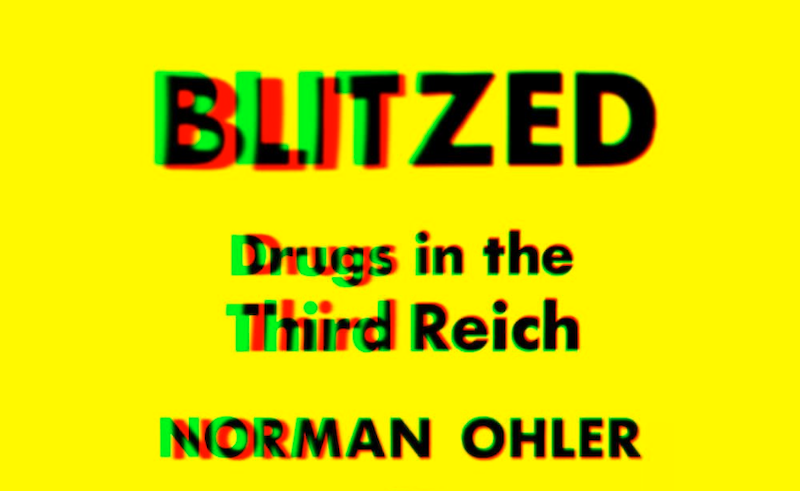 Why didn’t we learn in school that Hitler was a drug addict, or that the heartless, uninhibited, and animal energy of the Nazis was easily explained by all the Pervitin tablets they were taking? Norman Ohler’s Blitzed: Drugs in the Third Reich is the only book I’ve read that explores wartime Germany’s relationship with methamphetamine. Speed’s influence on World War II is inexplicably under-reported, never taught in primary schools. I don’t get it: when I was in middle school, meth mania was sweeping daytime TV and I remember reading that Faces of Meth website in science class several times. Why not a tie-in? No better PSA than “Hitler did it,” or “Meth caused the Holocaust.” So much better than “Not even once”—that’s a dare, not a warning. The Third Reich becomes less incomprehensible when you realize they were just speed freaks with enough guns and wounded pride to realize their world-conquering fantasies. Maybe it’s more convenient to keep Hitler as an avatar of unsurpassable evil and inhumanity instead of an insecure, incontinent drug addict in the right place at the right time to capture the weary and confused souls of a nation beaten down into the dirt.

As soon as Hitler met Dr. Theodore Morell, they became inseparable, and the doctor’s daily injections of animal hormones and extremely potent psychoactive drugs propped up a sick, disfigured, hateful, and paranoid man. Ohler mines Hitler’s neuroses and insecurities: as he became more and more dependent on Morell’s medicine, he continued to deny being an addict: “There was a psychological importance in the fact that the combination of injections changed every day. It meant that Hitler never had the impression of becoming dependent on a particular substance.” This was of course in direct contradiction to the Nazi abhorrence of “poisons” like drugs, alcohol, and particularly cigarettes, which might be the only vice Hitler never adopted. What Ohler calls Hitler’s “polytoxicomania” led to the Führer holing up in his damp, sunless bunker (Wolfsschanze, or Wolf’s Lair), “radically distancing himself from the human conventions of living,” obstinate in the face of the Nazis' stalemate in Russia and “determined to bring his war on the defenseless to a satisfactory conclusion” in the form of the Holocaust.

By early 1942, Hitler was “rigidly fixated” on Jewish elimination as success on all other fronts increasingly appeared impossible. Ohler calls Hitler “the worst criminal and psychopath of all time,” and the effect that methamphetamine (and eventually cocaine and the opioid Eukodol) had on his behavior can’t be understated: delusions, paranoia, shifting blame, ignoring the obvious, fixating on nonsensical solutions, holing up in a bunker? Hitler was the quintessential speed freak, and a more convincing and scary cautionary tale for kids thinking about using meth or abusing Adderall than some zombie’s mugshot on a slideshow.

Some of Morell’s quack concoctions that Hitler took regularly: Belladonna Obstino, Brovaloton-Bad, Calcium Sandoz, Profundal, Benerva forte, Luminal, and Enzynorm. This is in addition to daily administration of cocaine, codeine, and intravenous methamphetamine as well as Pervitin tablets. Note that The Beatles took Preludin (regular amphetamine) when they were in Hamburg cutting their teeth playing seven or eight sets a night. Maybe those primary school teachers didn’t lean on the speed angle because they knew a lot of their students were on speed themselves, in the form of Ritalin, Adderall, Vyvanse, and Concerta.

MSNBC’s Chris Hayes was incredulous when a guest claimed on his show All In a couple of years ago that Adderall was no different than methamphetamine in its effects and dangers: “It’s not the same drug!” He might’ve been on it himself and felt self-conscious. Speed is more normalized in mainstream culture than any other psychoactive drug because it advances capitalism: focused workers, wired children that sit still, pharmacies and companies like Shire making a killing. To point out that there's only a tiny structural chemical difference between methamphetamine and Adderall is offensive and unbelievable to most people. Why? Acknowledge that the best and worst moments of the 20th century were fueled by speed. It busts a lot of myths and explains the inexplicable and impossible pretty quickly. Blitzed is by no means a comprehensive history, biography, or decoder to the most concentrated movement of evil in human history, but it does ground the Nazis and their leader in the reality of chemically augmented reality rather than dwelling in myth and superstition.