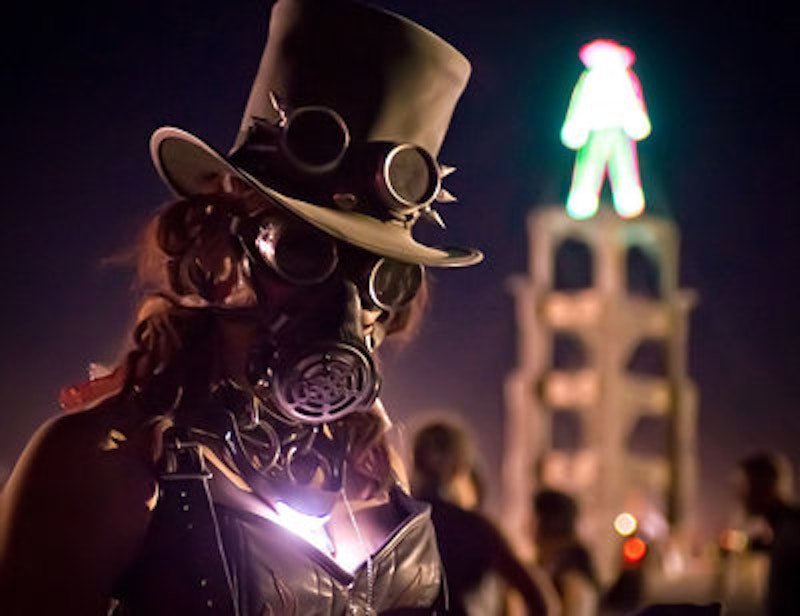 Our culture has never produced information at a higher rate than it does now. That contributes to people be more focused on the present than in prior times, leaving little reverence for the past and little confidence we can still predict the fast-shifting future.

On the other hand, there’s steampunk.

This overfull “present” we live in can more easily borrow bits from the past—and show us technological futures-in-progress at labs and in lone individuals’ imaginations—than ever before. We take that capacity to mix and match for granted. That may have to suffice as a substitute for what our ancestors would’ve called a sense of history. Things could be worse.

But why did steampunk in particular “stick” as a recurring aesthetic trope, when in theory we could fetishize and refashion any era? One reason is that steampunk—basically stories and fashions that reimagine the 19th century as it might’ve been if it had futuristic sci-fi levels of technology—isn’t completely fictional. There really were half-crazy inventors and businessmen like Edison, Westinghouse, and Tesla doing strange things with electricity, steam, and radio waves.

The conflict between those three will be fictionalized in the movie The Current War later this year, and the ongoing fictionalizing of the Victorian era as a whole is described in the book Clockwork Futures: The Science of Steampunk by Brandy Schillace. She spoke last Friday to a gathering of the Brooklyn science lectures club called the Empiricist League, hosted by author, musician, and marketer David “Lefty” Leibowitz. (Leibowitz does not claim to be a scientist or inventor himself, but he does share with inventor Elon Musk the trait of having a startlingly well-aging fashion model mom. Old is the new young, just as the 21st century is the new 19th century. Leibowitz also co-founded the debate series that evolved into the live debates I’ve hosted in years past in New York City.)

Schillace was joined onstage by anthropologist Wythe Marschall, who in the course of studying how urban planning can interact with plants and farms has become a historian of past utopian urban planning visions. His effort to think big and systematically is too endearing for me to complain about his joke on Friday night about libertarians preferring individual plots of land because they don’t like people. It’s almost true. Sculptor Ted Southern was likely the most practical speaker of the evening, though. He designs and sells real NASA space suits.

Just as we’re all guilty at times of taking the advance of technology for granted, it would be easy to take the Empiricist League for granted, but Brooklyn hipsters gathering to hear more about science really is a wonderful thing. Recall, if you’re my age, how often smart people worried back in the late-20th century about whether our culture would ever find a way to make science hip and entertaining. Even to those of us whose first philosophical allegiance was to science and skepticism, it seemed a tall order. I recall worrying that efforts to make science hip would simply yield something like PSAs of basketball players telling kids to learn math if they want a “jump” on life.

But things basically worked themselves out! Instead of worrying about being a nerd, I now worry I’m a loser because I didn’t actually major in a STEM discipline, as the acronymizers of this century put it.

Of course, there’s a good chance we’ll all soon lose track of late 20th-century history when we try to recall how we got here, just as we’re losing track of all other chronal signposts. One major signpost Schillace might’ve mentioned when asked about the origins of steampunk but didn’t is itself a mind-bending lesson in retro-futurist chronology: Steampunk may trace its roots to real scientists like Edison and fiction writers like Jules Verne, but let us not forget that steampunk was also a back-derivation from a much more recent phenomenon: cyberpunk.

If you wanted to be really simplistic about it, you could say both cyberpunk and steampunk were invented by the same writer, William Gibson. I’d be tempted to say that if I were his agent. The truth is slightly more complicated, but he did write one of the first cyberpunk novels, Neuromancer, in 1984 and co-wrote one of the first steampunk novels, The Difference Engine, just six years later in 1990.

Immediately, though, complications of chronology and causality enter our minds. For starters, he had that co-author, Bruce Sterling, on the second book. Among other projects, Sterling has also created a Dead Media Project that does an eye-opening job of tracking decades-old real media tech that never quite took off but might’ve in a just slightly altered historical timeline (think of that vast, dormant network of pneumatic message tubes that still lies beneath Manhattan). In 1998, Sterling also wrote an anarchist-leaning satire of 21st-century political campaigns that seems eerily prescient in its cynicism and sheer make-it-up-as-you-go-along randomness.

Two greater complications spring to mind in justifying the labels “cyberpunk” and “steampunk,” though.

For one (as my friend Scott Nybakken from DC Comics has noted), Gibson’s founding cyberpunk novel isn’t really all that “punk” in the literal musical sense. In fact, it instead contains joking references to Steely Dan and, a bit closer to the target, Velvet Underground. But we’ll let that pass. (X-Men comics were busy blending actual punk aesthetics and cyberpunk around the same time, though they don’t get quite as much credit for it in these histories as they deserve.) The novel also owed a great deal to era-blending pre-punk works such as Godard’s film Alphaville.

Second, it’s unclear whether steampunk starts with The Difference Engine, the 1960s faux-Verne novels of Michael Moorcock, or arguably with Verne himself (and his later American imitators, who wrote novels in the 19th century called “Edisonades” that sound for all the world as if present-day steampunk authors wrote them but were actually for sale back in the Victorian era, depicting things like walking mechanical “steam men” marching across the prairie).

Maybe in the long run, people will not even be able to identify the point at which sci-fi authors went from (1) imitating Jules Verne in a way that felt current and forward-looking to (2) imitating him in the ironic, metafictional steampunk fashion. Yet somewhere around mid-20th century, there has to have been an inflection point at which sincerity became irony in this area, when mere fiction became metafiction—and later just hardened into a strong, narrow set of genre conventions for nerds.

Not that I’m complaining. I’m not the one who has to lug the props to Burning Man while wearing a hoop skirt.