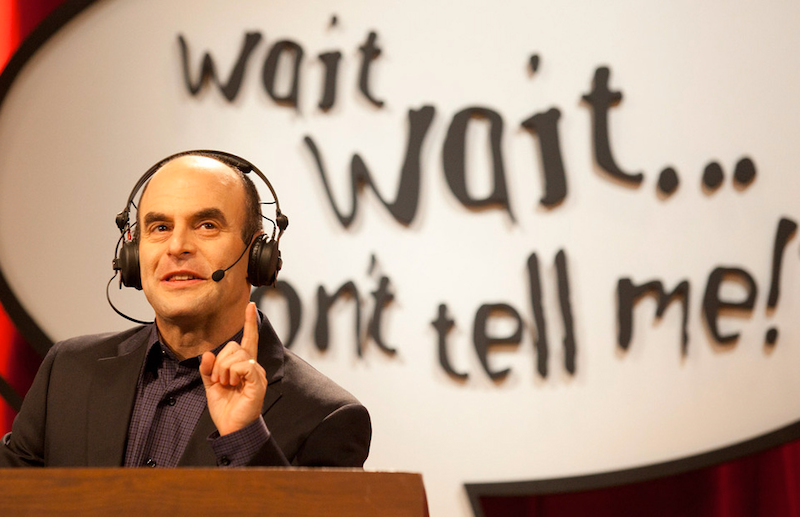 I've got a love/irritation relationship with NPR. Their news programs are often informative and there’s good reporting, but the air of polished smug earnestness gets a little old over an entire hour of All Things Considered. Or after 30 seconds of This American Life.

Attending a live showing of the NPR news quiz Wait Wait… Don't Tell Me last week showcased both the best and the worst of the station—though not exactly in the way I'd anticipated. My wife and son love the show, and so I've listened to it frequently, though without much enjoyment. I'd always found it moderately amusing but abrasively safe for a news satire show. Especially with Trump in the White House and America sliding towards fascism and general misery, there's something off about giggling innocuously at the week's headlines. I prefer John Oliver, whose facetiousness is balanced with actual reporting and political commitments.

So I was taken aback at how fun the live taping of Wait Wait was. A lot of this was due to Paula Poundstone, a semi-regular guest on the show, who’s a brilliant improvisatory comedian. You can hear this to some degree on the final radio version of the show. But the editors always cut her down to a few sound clips, and she's really best, as it turns out, when she gets a chance to ramble. In fact, one of the running gags on the show was that she's impossible to shut up. There was a long segment in which host Peter Sagal explained that an unseen producer would flip a coin to determine who answered questions first—and Poundstone turned to the guest next to her and interjected, "He's always trying to tell us someone is flipping a coin. Sure they are Peter!" She stalled out the show for 10 minutes baiting Sagal about the invisible coin toss, muttering about how the producers were going outside and taking wind speeds to determine question order. It was hysterical and irrelevant, and all of it was cut from the final edit.

The radio edit also made the call-in guests sound smarter and more coherent. This was especially the case for a guy who worked on a nuclear submarine and who was farcically stumped by even the simplest questions. The guests, Sagal, and the audience rolled their eyes and feared for the safety of our country.

The radio did keep some good quips. For example, guest Hari Kondabolu suggested that the title of Hillary Clinton's next book should be, I Told You So. See You in Hell. The radio also kept most of Poundstone and Kondabolu riffing about pigeons taking a bus in Delhi. Overall, though, the hour-long radio edit was a lot less weird, and less funny, than the two-hour plus live version.

I'm not sure if this is the case every week. Poundstone is a unique talent, and I doubt the show is as long, or as hilarious, when she isn't there. Still, the live show demonstrated pretty clearly that the radio edit of Wait, Wait… Don't Tell Me sounds tame and filtered because it is tame and filtered. The deliberate blandness is intentional; some things are too funny for public radio, and Poundstone is one of them.