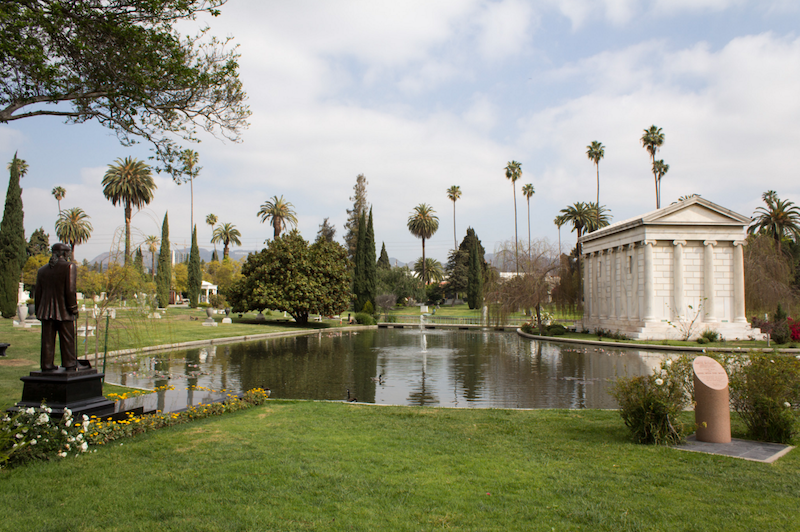 The history of Hollywood Forever is strange and fraught with scandal. It was founded in 1899 on 100 acres and originally called “Hollywood Cemetery.” RKO Studios purchased 40 acres and this became the Paramount Studios lot. Part of the remaining land was put aside for Beth Olam Cemetery, the only Jewish burial ground in Hollywood. In 1939, convicted felon Jules Roth purchased a 51 percent stake in the property. For the next six decades, Roth used cemetery funds to pay for personal luxuries while the grounds fell into disrepair.

Roth forbade minorities from burial at the site. This included actress Hattie McDaniel (Gone With The Wind) who’d expressed a desire to be buried among her peers. In the 1950s, Roth purchased a boat he claimed he needed to scatter clients’ ashes. Instead, the yacht was used for parties and liaisons with women. As headstones and crypts began crumbling, questions arose about the use of cemetery funds. A disgruntled employee alerted the IRS and Roth was forced to sell land to settle the tax debt.

The cemetery became so decrepit that in 1974 crematory bricks collapsed around the body of pop star Cass Elliot as she was being cremated. The heirs of makeup artist Max Factor complained after a mausoleum sustained water damage that soiled the walls. Relatives disinterred bodies and moved them to better-kept cemeteries. In 1986, a class action lawsuit was filed against Roth. To settle the lawsuit and ongoing tax bills, Roth sold three acres of property fronting the cemetery. This became a strip mall housing auto repair shops and a laundromat.

By the '90s, the cemetery was no longer profitable and only made money by charging $500 for disinterments. In 1997, Roth took a fall in his Hollywood Hills home. Ill and bankrupt, he died on January 4, 1998. His body was buried on a rainy night in an unmarked grave. (It was later moved to a crypt in the cemetery near his parents.) After his death, it was discovered that the cemetery endowment fund was missing about $9 million. Employees also found dozens of urns in Roth’s office that were supposed to have been scattered in the Pacific Ocean.

In 1998, brothers Tyler and Brent Cassity purchased the property for a paltry $375,000. They were part of a wealthy Missouri family of cemetery proprietors. They invested millions in renovations and renamed the site Hollywood Forever. They attempted to redress past sins such as erecting a granite monument to Hattie McDaniel. They also turned the site into a cultural center, hosting local events like outdoor movie screenings (Night of the Living Dead), a yearly Dia de los Muertos Festival and indie rock concerts with performers like the Flaming Lips and Bon Iver. The only rule for music acts was “no death metal.”

As Hollywood Forever’s profile in Los Angeles gained favor, business improved. The cemetery became a popular location for Russian clients who cherished monuments atop their graves. (Russian plots occupy about 30 percent of the site.) Most cemeteries ban monuments for religious reasons, but Hollywood Forever has no such restrictions. Custom designed headstones include towering blocks of granite, life-size statues and elaborate portraits engraved in stone. The monuments cost up to $20,000 while plots range from $20,000 to $200,000.

In 2010, scandal returned. Brent Cassity and his father were indicted for running a Ponzi-like scheme and stealing more than $450 million from a pre-need funeral company they ran in Missouri. Authorities determined most of the money used to renovate Hollywood Forever came from these ill-gotten proceeds. Brent and his father pleaded guilty to wire fraud and money laundering and were sentenced to prison. Though Tyler Cassity was not charged in the case, Brent sold his interest in Hollywood Forever to a family-owned trust.

Still, Hollywood Forever continues to thrive and celebrities are again choosing the location for last rites. George Harrison was cremated at Hollywood Forever and his ashes were scattered in India. Other recent burials include film director Tony Scott, actor Anton Yelchin, and rocker Chris Cornell.

In an interesting side note, the cemetery helped shape the history of American film. In 1970, Paramount Studios had financial troubles.  Their parent company Gulf + Western explored selling the studio lot. They offered the land to Jules Roth so he could expand the cemetery, but due to his financial troubles, he passed. Paramount opted to keep the studio. Had Paramount been sold, it’s possible The Godfather would never have been made. At the least, Francis Ford Coppola wouldn’t have directed. As a result, the cemetery can say it played a small part in helping to revive American cinema.