Ari Shaffir Is Disturbing But Not Unhappy

The man-bat doesn’t miss his wings. 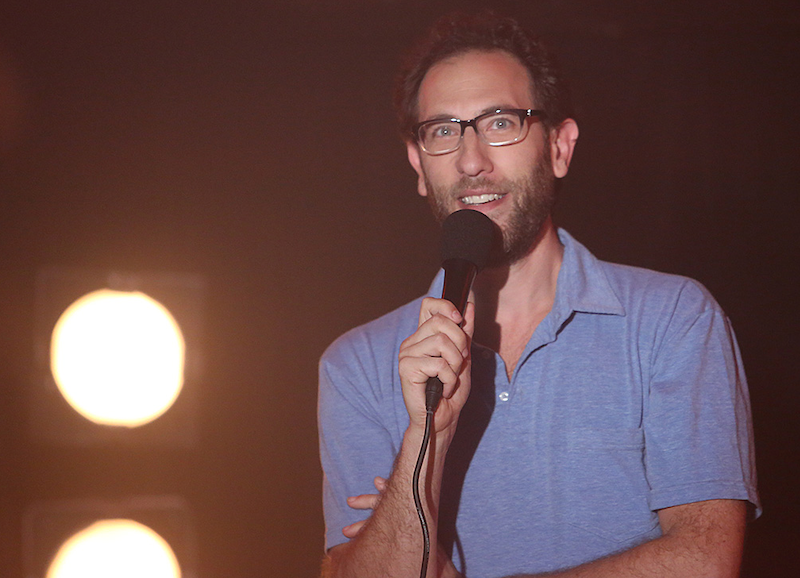 His elbows are near his ribs, his slat-like shoulder blades press close to each other, and his hands droop somewhere in front of his nipples. Ari Shaffir looks like a man-bat whose wings came off. Of course, he also looks like a vertical strip of gray meat that’s about 10 feet long. But a strip of meat wouldn’t have a knobbed head or pointed ears, so I return to my man-bat comparison. The man-bat isn’t bitter. He doesn’t miss his wings. He ambles and paces about a patch of stage, a microphone wedged in one hand. He’s settled to life on level ground, and he’s filling us in on its aspects. I think possibly he’s settled too far. Shaffir’s material includes masturbation, sleep binges, pot addiction, STDs, the uselessness of children, and the question of whether abortionists ever hum while they work. He has a belly-crawling point of view. Or, as he might put it, he has a resigned awareness of reality’s ground rules and what existence has in store for us.

I can’t remember any of the jokes that Shaffir makes in his new Netflix project, Double Negative. It’s not that they weren’t funny, but their funniness was incidental to Shaffir’s chief effect. Shaffir comes off as a very intelligent man who has graduated to a life of zero fucks, for whatever that’s worth. The best thing about his act is seeing him be that man, something he does with a skill that passes itself off as mere behavior. He can sound like he’s talking to himself, and all the while he’s setting up a joke. He can make a show’s worth of jokes, and then it dawns on us that the real act is him, the bent and ambling man-bat who knows the lowdown on our broken world.

During his act, Shaffir indicates that he grew up as an Orthodox Jew. He doesn’t say this. He gets the point across by wincing and gesturing, the gesture being to finger his nonexistent payot. They’re gone now and he’s on his own, another belly in a t-shirt bestirred from a mattress. He’s got no time for God—dumb idea, he tells us—and he smoked pot twice a day for a decade and a half. I suppose that Shaffir, as someone who has cut himself out of a community and managed to make a roll-your-own life, must know more about the front and back of existence. I mean the sides we overlook because so many of our perceptions are done for us by the society we fit into. I bet he does know about them. Apparently, the side that grabbed him is the dirty-underwear side.

Shaffir might be a demon, especially with those ears. But not an active demon, a ruminative one. Typically, an angel gets thrown out of heaven and becomes a devil. In this case, possibly, a devil bumped against the earth and became Shaffir. Deposed angels shout defiance against God. The retired demon said “Whatever” and shambled onto Netflix. We now have a bent but authoritative being willing to take us into his confidence regarding the dingy, eclipsed 50 percent of life that we’d rather wasn’t there.