More than 1000 words on handkerchiefs, St. Patrick’s Day and “Scrub My Balls” Beto. 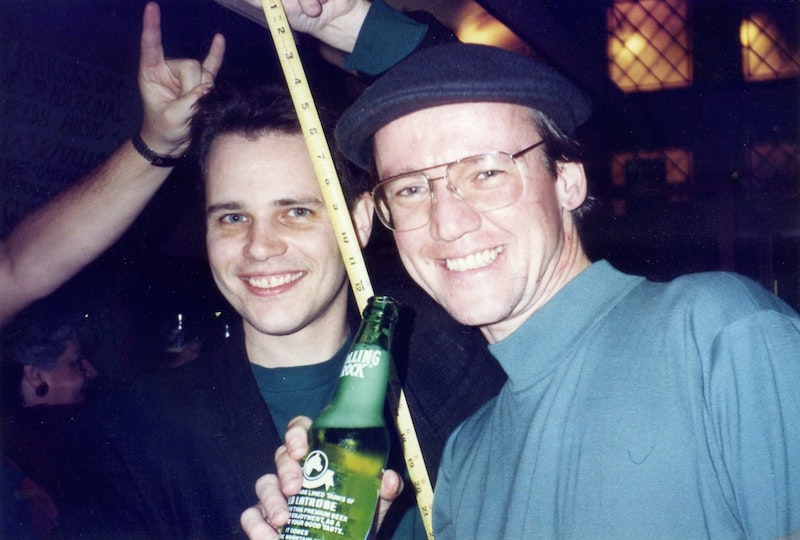 Last Sunday I couldn’t get the opening lyrics of Love’s 1967 song “Live and Let Live” (from Forever Changes) out of my head, couldn’t stop singing them to no one in particular. “Oh, the snot has caked against my pants/It has turned into crystal/There’s a bluebird sitting on a branch/I guess I’ll take my pistol,” sings Arthur Lee, and while the song doesn’t make a lot of sense, it’s catchy.

My son Booker was home for the weekend, and I thought of him, since when he was a kid he’d mortify his parents at fancy restaurants by taking a cloth napkin and, without any inhibition, blowing his nose into it. I remember asking him, time and again, “Why don’t you use a handkerchief,” and, as was often the case when I invoked a relic from the time of twice-a-day mail deliveries (I still think the USPS could prosper if it were privatized, though the profit motive isn’t the same as say, 1985), he looked at me as if I were Henry Clay.

“Dad, no one uses handkerchiefs today,” he’d reply—the same scene repeated itself around 10 times—and I’d counter that his Uncles Jeff and Gary still carried the maligned accessory to that day—both plagued, like my dad, by rose and hay fever in the spring and fall—but that carried no weight. “Who,” and Booker would pause for emphasis, “would want to carry around a snot-soiled rag in their pocket all day?” It was a valid point, and to be honest, I gave up on handkerchiefs when I was eight or nine, since they were messy, but the recollection of Jeff taking out his hankie, honking, and then returning it to his pocket, warmed my soul, as did thinking about the pile of laundry tossed down the landing of our house in a heap, including a dozen or so handkerchiefs, “Wall Street” undershirts (we never called them “wife-beaters”) and the usual mess of clothes that five boys produced.

It was a time-warp fog around me, for it was also St. Patrick’s Day, and as has been my habit since a tot, after my morning shower I picked out a green turtleneck to wear that day—didn’t think twice—and later was mildly vexed when my sons and wife didn’t follow suit, even though they’re also Irish-Americans. Booker tried to pass off his pants as green, which was, if not quite a whopper, a stretch, but at least he attempted a chintzy defense, unlike his older brother Nicky who just ignored the interrogation about his lack of green, conspicuously absent from his outfit.

(I’ve hung up my cap when it comes to celebrating St. Patrick’s Day out in the pubs, as in the accompanying 1990 picture with my friend Michael Gentile in Lower Manhattan, and though I never stooped so low to drink green beer, I had enough fun to last one lifetime. As I recall, my last crawl on St. Patrick’s Day ended up at the old Printer’s Pub near the Holland Tunnel, and upon finding five light bulbs that I’d absconded with in my overcoat the next morning, I figured more subdued behavior was in order.)

As for Melissa, she laughed and said she was “thinking green.” Man, alive! It’s not as if we make a big deal out of St. Patrick’s day—Melissa offered to make corned beef and cabbage that night, but I passed, perhaps thinking of all the corned beef hash (canned) I ate as a kid—so I guess it’s just a tic I’ll never shake. Maybe it’s stuck with me because of an oft-told story from my mom, dating back to when she worked in some Manhattan office in 1939, and a young woman, in an ill-conceived attempt at humor, scandalized her colleagues by wearing an orange blouse; she was shunned from that day on and soon found other employment. Really, it was just 23 years after all but six counties in Ireland were freed from the British noose, so tempers still flared.

Tempers still flare today, as if you hadn’t heard, and the GOP took a lot of heat from Democrats and #NeverTrumpers for a juvenile St. Patrick’s Day tweet showing a picture of “Are You With Me Jesus, Cause Baby I Was Born to Run” Beto O’Rourke, captioned “Drink Responsibly,” referring to the “scrub my balls” presidential candidate’s DWI arrest (there but for grace of Teddy Kennedy…) in which he attempted to leave the scene.

It was stupid, and worse, entirely expected, but there are about 100 other GOP/Trump transgressions to set that hair-trigger temper in motion if that’s how you spend your day. And please, there’s no innocent person, of any ideology, when it comes to crimes of Twitter idiocy. Was the GOP jab at “wax my ass” Beto worse than, say, Noah Berlatsky last week tweeting that Tucker Carlson was the equivalent of Joseph Goebbels? Take a minute—everyone, even today, has a spare minute—and think of how grossly inaccurate that comparison is.

It’s just speculation, but I don’t think Beto can hop from table to table across the country with his vague message of hope (although I suppose his advocacy of third-term abortions will win him some votes) and win the nomination. But he’s Sideshow Beto, and who doesn’t want more entertainment in this presidential cycle? I sure hope “Uncle Joe” Biden—that moniker offends me a bit, since my own Uncle Joe had more dignity in his pinky toe than the grabby, gaffe-prone Biden—does announce his entry soon, since that’ll muck up the 114 debates even more.

I see that the floundering Elizabeth Warren has made noises about reparations for African-Americans and abolishing the Electoral College, reliable talking points, but of course she offers no specifics. I think Mayor Pete—he can’t get elected with the surname Buttigieg, far, far more damaging than the fact he has a husband, which is a plus, and will probably raise money—is a smart and calming presence in the field and hope he’s taken seriously. And wouldn’t it be a scream if Bill/Hillary bagman Terry McAuliffe also joined the fray? Maybe that’d coax “Trailer Trash” James Carville out of exile.