Out of the many unique Marvel concepts that burst into life in the 70s, Captain Universe is the most timeless and mystical of all. 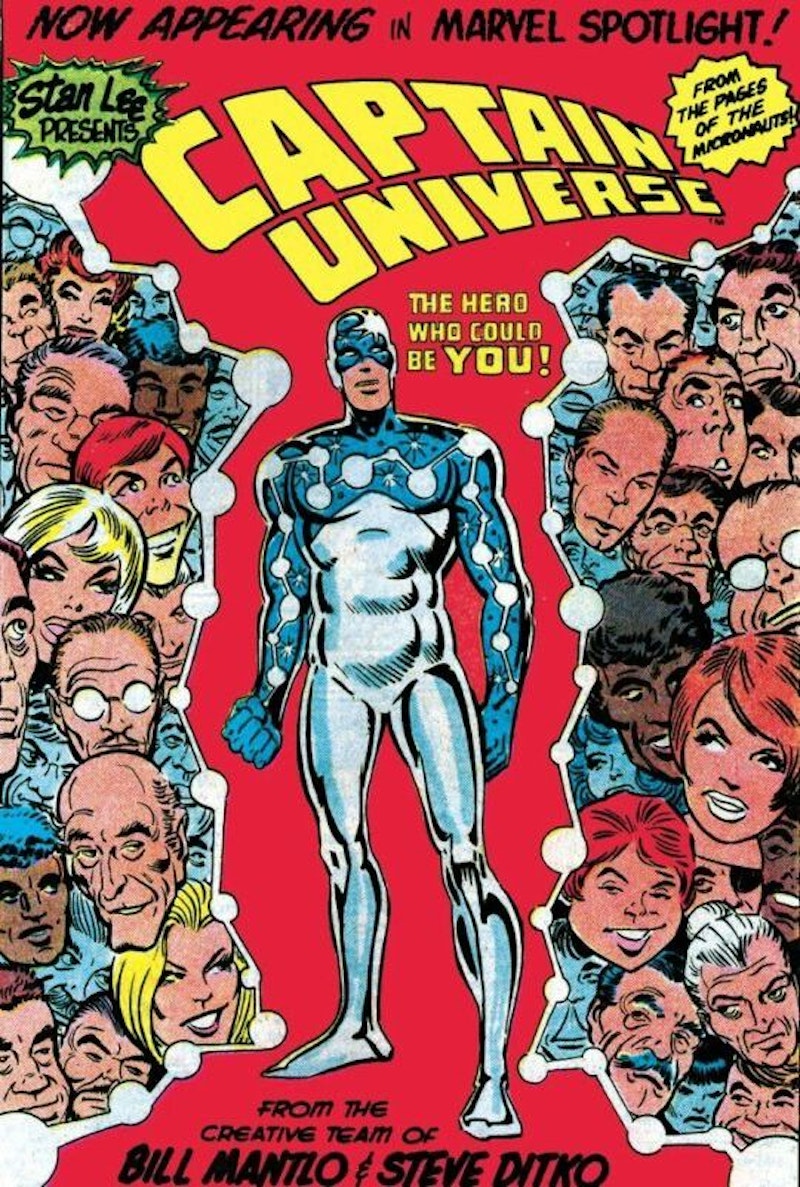 Think about the strange entity Captain Universe, a sentient cosmic presence from beyond the solar system who possesses the power to temporarily transform ordinary people into super heroes. Captain Universe first appeared in Marvel Comics during the 1970s, a period in which the publisher introduced amoral anti-heroes like Conan The Barbarian and Red Sonja; the Odyssean science-fiction sagas of Warlock and Captain Marvel; the teen angst of The Uncanny X-Men; iconic femme heroes like She Hulk, Gamora, and Spider Woman; the first major comics to star the black super heroes Luke Cage and Black Panther; the bizarre satirical character Howard The Duck; horror themed characters like Deathlock The Destroyer, Satana, and Ghost Rider. Out of the many unique Marvel concepts that burst into life in the 70s, Captain Universe is the most timeless and mystical of all.

Uni-power is a formless energy that emanates from The Microverse. In Marvel's canon The Microverse is the remote home world of The Micronauts, a pint-sized team of intergalactic adventurers who were co-created by the eccentric comic book writer Bill Mantlo, artist Michael Golden, and the Mego company as a marketing tie-in for a line of toys. Mantlo & Golden also created Captain Universe who made its first appearance in Micronauts no. 8 in August 1979. As the name implies, the Uni-power exists for the purpose of maintaining universal harmony throughout all corners of the Marvel realm. When there’s an emergency situation threatening that harmony the Uni-power possesses the body of a mortal being and briefly gives this person the identity of Captain Universe. Attached to that identity is a wide array of super human powers and a costume. When anyone is given the Captain Universe identity the Uni-power amplifies its host's most admirable traits, making it easier for the ordinary individual to physically and emotionally confront whatever evil adversary is attempting to unleash destruction.

Though Golden was the first artist to render the entity, comics' greatest illustrator Steve Ditko drew the definitive version of Captain Universe. Early-1980s issues of the comic Marvel Spotlight featured the three original Ditko Captain Universe stories, all of which were written by Bill Mantlo. In Marvel Spotlight no. 9 Captain Universe's presence comes to the skateboarding daredevil teen Steve Coffin when his father astronaut Ray Coffin becomes ill (Ray Coffin was the first mortal to ever to exist under Uni-power control). The Uni-power inspires the younger Coffin to battle against alien shadow monsters that are bent on conquering Earth. Then in M.S. no. 10 a pair of sisters—streetwise detective Clare Dodgson and suburban homemaker Ann Dodgson—become twin Captain Universes to thwart an organized crime mob whose masked boss hides a shocking secret. From twin crime busters to a criminal loner, the following issue found the Uni-power making its way into the body and soul of a cat burglar named Monty Walsh. As Captain Universe, Walsh takes down a rival criminal's racket empire.

Many comic books are filled with the dense interior monologues and complex story lines that present individual characters grappling with the constant stress of life as a super hero. Captain Universe throws this stuff out the window. Its lack of connection to any recurring single personality is a story element that highlights fleeting situations and fate as major factors in dramatic continuity. The personal lives of the many Captain Universe alter egos are explored, but never at length, only long enough for the reader to understand a few core reasons why each disparate human could thrive as a Uni-power host.

If the ultimate statement of Spider-Man and other conventional super heroes is the objectivistic "with great power comes great responsibility" then Captain Universe's could be the polar opposite, something like "go with the flow." A person has little self-control once Captain Universe is in their life and no one can outright refuse the omnipotent will of the Uni-power. Despite this, the reactive entity works more like a temporary guardian angel than a god. In the Marvel Spotlight stories that feature Captain Universe each of its hosts' lives are positively impacted by the being's presence and they never have to worry about possessing its power forever. In Spotlight no. 9's conclusion Steve Coffin becomes closer to his father than ever before. When the Hodgson sisters are released from the Uni-power's spell they learn how to avoid envying one another by accepting themselves on unconditional terms. At his adventure's serendipitous end, Monty Walsh learns that vengeance is always futile.

Captain Universe is unconstrained by economics, politics, physical features, social mores, and everything else that can dominate narratives set within conventional reality. The formless sentient energy being is easily relatable for anyone with cursory knowledge of folklore, religion, and the supernatural, yet its transience effortlessly subverts the average conflicts of super hero stories. When the Uni-power makes the scene Earth becomes nothing more than an intermediary between the physical world and a cosmic consciousness that defies simple description, something that's so vast, strange, and progressive that it can never be fully understood. It's fitting then that this imaginary character remains just as anomalous now as it was 40 years ago. In our non-imaginary world where nuances have become the mass media equivalent of ghosts and monsters, Captain Universe reminds us that sometimes the best things can be momentary and enigmatic.