The Theater of Cruelty

As long as we’re not hurting people, we should be able to do whatever the fuck we want. 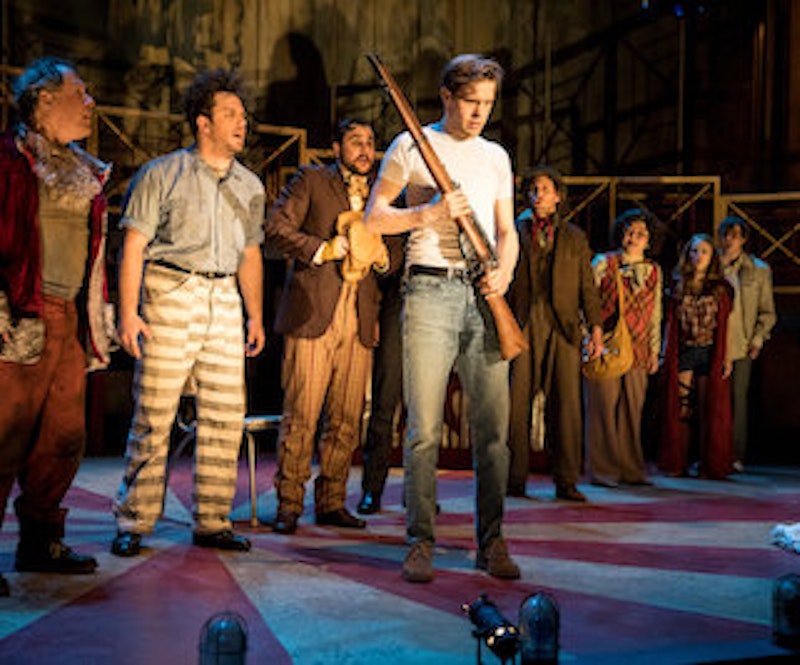 In the avant-garde classic The Theater and its Double, French poet, theater-director, and essayist Antonin Artaud described his vision for a new metaphysical form of expression in which theater is used to transcend human limitations and conceptions. He called it “The Theater of Cruelty,” and penned a manifesto to describe the phenomena:

“What the theater can still take over from speech are its possibilities for extension beyond words, for development in space… for dissociative and vibratory action upon the sensibility. The question… for the theater, is to create a metaphysics of speech, gesture, and expression, in order to rescue it from its servitude to psychology and "human interest.”

Stephen Sondheim followed in Artaud’s footsteps with the epic Sweeney Todd and the lesser-known Assassins, a musical play that describes the assassinations of American presidents from the point of view of the assassins. In The Other National Anthem, a chorus of the rabble consisting of everyone from John Wilkes Booth to Lee Harvey Oswald is defined:

We’re the other national anthem, folks

The ones that cant get in

To the ball park

For those who never win,

For the suckers, for the pikers,

There are those who love regretting,

They hear the music...

They hear the screams…

In Assassins, there’s a surreal theme park setup in which you can shoot a president to win a prize.The simulation of politics is mocked in the Baudrillardian tradition. There’s nothing considered rebellious or counter-cultural about this piece of work. It’s not labeled as violent or “revolutionary" in the negative sense. It’s simply a brilliant statement of musical theater in which the motivations for even the most atrocious actions can be defined through song and dance. “Nobody can be put in jail for their dreams.” It’s suggested that by allowing people to have the liberty to experiment with their visions, no matter how cruel they may to be, we can seek to create a better world.

Similarly, Les Miserables portrays the struggles of women sold into sexual slavery and the desperation that lower-middle class actors resort to in order to keep their airbnb’s in check. The sympathetic villain Javert wishes to create some order in a world of chaos. Set among the backdrop of the French Revolution, Les Miserables portrays all points of views from extremist reactionary to Antifa demonstrator. Much like Assassins and Sweeney Todd, characters from all areas of the political spectrum are cast as flawed individuals who are misunderstood and seeking to understand the complicated world around them.

When you see a musical like Assassins or Les Miserables, the audience members look nothing like the actors on stage. There’s a detached removal from the actions of the actors, who are (much like rock stars and political figureheads) speaking for us when we can’t. The conductor, a respected member of the elite, displays passion and intensity while they directthe orchestra. The look on the conductor’s face is one of extreme engagement, and it’s clear that they feel the actors express themselves on behalf of the “other national anthem.” Musicals don’t get banned for being offensive, because musicals are considered to be high art.

Festivals such as Burning Man are working to bridge this gap between audience, actors, and conductors via encouraging what is considered to be “radical participation.” Clearly inspired by the writings of Artaud, there’s a desire for the participants of Burning Man to act our their desires in a transcendental way that combines social engineering, (conducting) an exploration of deepest areas of human consciousness, (acting) and having a damn good time (audience).

I’d love to see us go a step beyond Burning Man, and create an entire theater scene in which people could express themselves without fear of getting banned. The conductor should be the norm rather than the exception. Having a modern Theater of Cruelty would open up a new sector of the arts that’s not regulated by political correctness and censorship. As long as we’re not hurting people, we should be able to do whatever the fuck we want. If we do think about hurting people, we should be able to sing and dance about it.