Messiah won't convince any skeptics, but it's an interesting show for atheists and agnostics nonetheless. 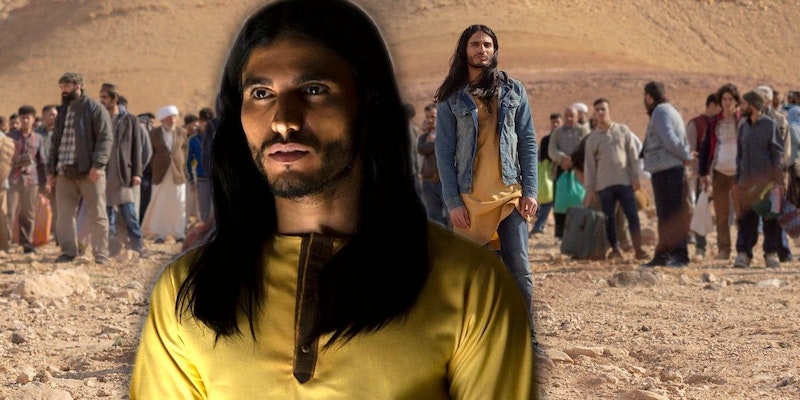 In the book Mere Christianity, C.S. Lewis proposed a question for his readers: Was Jesus a liar, a lunatic, or the Lord? The new Netflix show Messiah asks viewers the same question regarding its protagonist, a mysterious Iranian known to his followers as Al-Masih, “the Messiah.” Unlike Lewis, though, the show doesn’t use any presuppositionalist logical fallacies to outright say he is Lord. Instead, the 10-part series leaves it up to the viewer to decide, through all the plot twists and contradictions, whether Al-Masih is who he says he is.

The show begins in Syria where Al-Masih goes from another street preacher to the new messiah after a massive sandstorm drives away ISIS forces. He then leads his new followers to the Israeli border where he’s arrested, interrogated by Shin Bet officer Aviram, escapes prison, and then allegedly performs a miracle at the Al-Aqsa Mosque before fleeing to Texas. In Texas, Al-Masih befriends out-of-luck preacher Felix, his alcoholic wife Anna, and epileptic teenage daughter Rebecca after Felix’s church miraculously survives a tornado. As Al-Masih’s popularity grows, CIA agent Eva Geller follows his case, determined to expose him as a terrorist. For every miracle that Al-Masih performs—from knowing secrets about Aviram and Rebecca to walking on the Lincoln Memorial Reflecting Pool—a new piece of evidence emerges that casts doubt on his divinity.

The show’s both captivating and flawed. Eva (played by Michelle Monaghan) has no character arc; she’s just as cynical and angry in the end as in the beginning. If she’s supposed to change, Monaghan didn’t convey that. Characters pop up throughout the series with promising storylines that go nowhere. What happened to the college student who works in Eva’s favorite late-night diner? Then there’s the scene where Rebecca reveals a shameful secret to Felix. It’s supposed to be a dramatic ordeal, but it’s so spontaneous it’s almost laughable.

Despite its flaws, Messiah is still an intriguing series because of the questions it asks. If someone came out of nowhere claiming to be the messiah, would you believe him? What if he started doing things that look miraculous, like walk on water? Magician and skeptic James Randi makes a cameo at the beginning of the seventh episode casting doubt on Al-Masih’s Reflecting Pool miracle by pointing out many magicians have walked on water before. It makes sense since, as we find out later in the series, Al-Masih was raised by a magician uncle. Yet we never see anyone put plexiglass in the Reflecting Pool, so are we to believe he really walked on water?

Tony Keddie of Religion Dispatches sees the show as anti-Muslim propaganda that perpetuates the Christian fundamentalist apocalyptic belief of how war with Iran will trigger the Second Coming, but I disagree. It’s a reminder for viewers to always be skeptical. One of the show’s many subplots involves a woman named Staci (played by Emily Kinney of The Walking Dead) who follows Al-Masih in the hopes that he can cure her cancer-stricken daughter. When the girl does meet with Al-Masih, it doesn’t turn out the way Staci planned. There’s another scene where a father and his son find their missing dog buried until a pile of rubble after a tornado. The boy asks Al-Masih to save the dog, but he puts the animal out of its misery instead.

I can see how someone could attract a large devoted following quickly like Al-Masih does in Messiah. Desperate people seek desperate measures, which is why people cling to religion, gurus, snake oil, and other liars. Con artists love to prey upon vulnerable people who feel as though everything they’ve tried has failed. I spent my 20s chasing a non-existent god that I thought could fix me. It wasn’t until I made better choices that anything changed.