Secrets of the Legion of Super Heroes 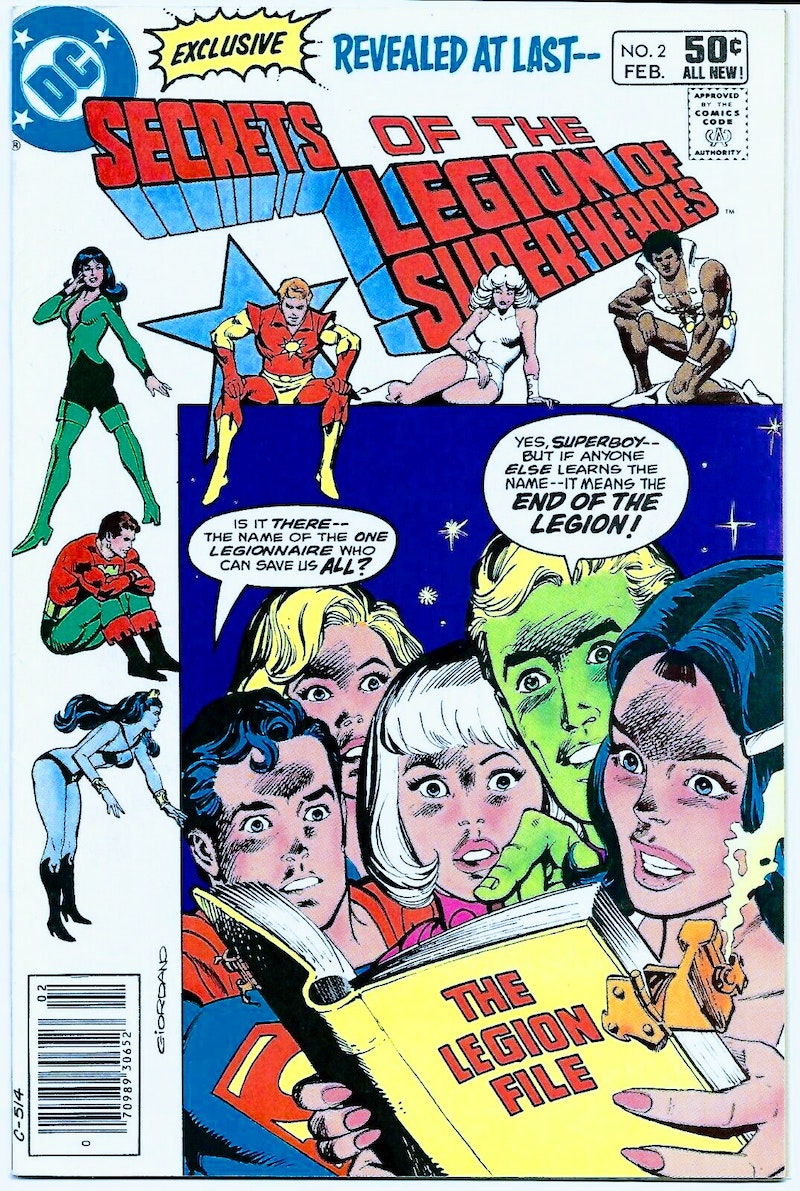 Secrets of the Legion of Super Heroes came closest to matching the ambitions of Roots and the other late-1970s TV works that inspired Bridwell's historical trilogy. For this segment (another three-issue mini-series), Kupperberg remained as scripter, while art was handled by veteran inker Frank Chiaramonte and underrated visionary Jimmy Janes, then the main artist assigned to the monthly Legion of Super Heroes series. Each issue of Secrets works as a standalone story or as a small part of the greater saga. Interwoven subplots involving a medical mystery, identity politics, and abandonment fuse in seamless poetic glory. Stories of The Legion of Super Heroes are famed for their giant cast of characters, wild sci-fi premises, surreal humor, and character-defining cameos from Superboy and Supergirl. Even with all of these concepts front and center Bridwell’s historical pretense is never overshadowed.

A strong focus on origin narratives makes Secrets feels more like a cosmic oracle of sci-fi iconography than a comic book. Its speedy pace is a blatant nod to superhero comics’ roots as bi-products of pulp magazines and the newspaper space operas Flash Gordon and Buck Rogers. Here Bridwell’s imaginary histories reflect the real histories of publishing trends and speculative fiction. The rapid-fire litany of hero origins often results in characters’ entire lifetimes unfolding in the space of only a few panels. Constraints of the mini-series format may have been the biggest inspiration for this, but that brevity is also a strong reminder that the comic narrative style was the “flash fiction” of the pre-Internet era, a short sharp blast of art and literature aimed at readers whose attention spans were compromised.

It’s no accident that comics, pulp magazines, paperback novellas, short story collections, Reader’s Digest, and other budget periodicals were frequently available via train station/street corner newsstands, supermarket checkout racks, airport/hotel gift shops, and other high-traffic areas where people had to put up with unpredictable shifts in time and space. Even though their stories were packed with emotion, these publications weren’t meant to control readers’ lives. Bridwell and co. deliver a sacred scroll’s wealth of information without requiring readers to make any massive time sacrifice to soak it all in.

In a detail that side-stepped earlier comics’ white male-dominated perspectives, the intergalactic diversity of the Legion characters resembled the diversities in sexual, cultural, racial, religious, and socio-economic backgrounds possessed by the new generation of comic fans and creators who were becoming more influential during the 1980s. Origins appear throughout the series as moments that solidify the individuality and agency of characters; each member of the team possesses a back story and a supernatural ability that differs significantly from that of one another. Consequently, The Legion’s sum power as a team is derived from the ways that those differences compliment each other. Bridwell and Kupperberg’s narratives illuminated this. In turn, readers could relate to The Legion’s many evolutions and triumphs.

The Official Handbook of the Marvel Universe came out a year after Secrets concluded, and DC's Who's Who followed two years later. These encyclopedic series modified and built on contextual elements created by Bridwell. They differed from his work in that they relied on wordy layouts accompanied by simple illustrations done in a classic comic style sans sequential design. Gone were the attempts to use sequential art itself as a tool to chart patterns of imaginary history. After the Bridwell mini-series, these two titles represented the next logical step in cultivating greater understandings of comic book characters via the methods of academia and genealogy.

Despite stellar artwork and bold layouts, the nerdy fact sheets of The Official Handbook and Who’s Who can’t match the innovative breadth and power of Bridwell’s three historical mini-series. The writer’s imaginary histories mark a moment where fantasy’s symbiotic bond with reality became unbreakable. Bridwell used his mini-series to transcend escapism by exploring the comic book medium’s ability to mirror the developments and purposes of contemporary trends in fiction and non-fiction. World of Krypton, Secrets of the Legion of Super Heroes, and Krypton Chronicles documented and solidified society’s therapeutic connection to comic book characters, a connection that’s become stronger since the trilogy debuted more than 40 years ago.