Saturday Morning All Star Hits! is a loving tribute to taped TV. 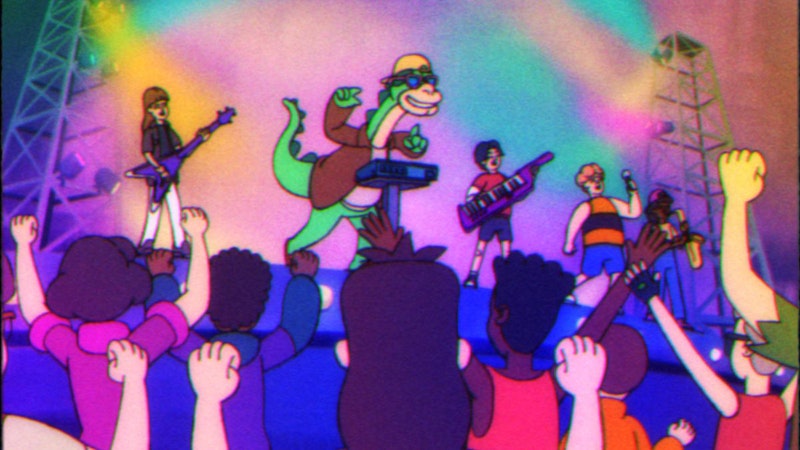 The conversation about the physical media of DVDs, Blu-rays, CDs, vinyl, etc. vs. the centralized media of streaming and Cloud-based services typically revolves around concepts of ownership (if you buy a movie online, do you own it as much as someone who bought it on DVD or Blu-ray?), consumer ethics (which is more ethical: paying Amazon $9.99 for a file of a movie or paying $20 for a Blu-ray and thus adding to the demand for a product that requires energy to produce?), and audiovisual quality. But the conversation mostly ignores what’s really been lost in the Cloud: the joys of shitty broadcast TV on tape. Since any movie or TV show can be purchased or streamed instantly, there’s no need for the blank VHS tapes that were once so vital to the avid TV-watcher. Gone with the VHS tape are all the temporal charms of taped-TV: the abrupt jump cuts during commercials, the tonal mishmash of daytime versus primetime, and the feeling of watching a genuine, unfiltered transmission from a bygone era.

Each episode begins with a blue VCR screen before the “tape” plays—stuttering and fuzzy, the static lines and warbling sound corrected with Auto-Tracking—and with one notable exception, each tape is an episode of Saturday Morning All Star Hits!, aka S.M.A.S.H., hosted by Mooney in the dual roles of twins Skip and Treybor. (S.M.A.S.H. is a parody of the real NBC cartoon block Saturday Morning All Stars, hosted by Chip and Pepper Foster.) The twins introduce a variety of cartoons, all parodies of real shows, recreated in cel animation: Randy, a Denver, the Last Dinosaur spoof centering around a depressed dinosaur with a drinking problem; The Create-a-Crittles, a Care Bears parody about magical, anti-corporate artist bears living secretly in the shed of a graphic designer (voiced by Paul Rudd); and Strongimals, a Thundercats parody with very confusing messages about war and peace.

The twins’ goofy onscreen banter, filled with gibberish slang like “zazzy zazz,'' does little to conceal the festering sibling rivalry after Skip lands a role on Strongimals (later renamed Skip and the Strongimals). This conflict lends the series its main thrust, with their interactions growing more tense with each episode, and it also gives Mooney ample opportunity for his unique comic talents as the dejected Treybor. Like many of Mooney’s characters, Treybor is a sad guy trying to play it cool, and his failure makes him even sadder. Speaking of sad: one of the series’ highlights is a one-off cartoon called Lil’ Bruce, a quickly abandoned pilot starring longtime Mooney character Bruce Chandling. The segment is a clear parody of Bobby’s World and Life With Louie—animated shows inspired by/featuring the comedy of their real life standup counterparts—but Lil’ Bruce goes to darker places when its pathetic comedian-creator must do family-friendly shtick over a cartoon about his parents’ messy divorce.

The combination of live action and animation in Lil’ Bruce is just one example of how well Ben Jones’ colorful retro aesthetic goes with Mooney’s talent for mining pathos from antiquated media formats. Jones has had plenty of success in television since his Paper Rad days, yet this feels like his first project for a mass audience to properly channel his vision. It’s unclear whether the cel animation is authentic or digital facsimile, but regardless the cartoon segments look unmistakably pre-Flash (the new cost-effective standard for animated TV and the reason why most cartoons look like shit today), setting the series apart from other retro-surrealist shows like Tim and Eric Awesome Show Great Job! and Check it Out! With Dr. Steve Brule in dedication to pre-Millennial production design.

S.M.A.S.H. has much more in common with IFC’s live-action doc parody Documentary Now! The series’ creators Bill Hader and Fred Armisen (who lends his voice to S.M.A.S.H.) try to use the same cameras, lenses, and film stock as the films they’re parodying, and much of the show’s humor comes from their cinephilic visual vocabulary (for example, the slow-motion recreations of Errol Morris docs are utilized for maximum comic effect in the John Mulaney-penned Thin Blue Line spoof “The Eye Doesn’t Lie”). S.M.A.S.H. operates from a similar visual vocabulary of worn VHS tapes, recreating the experience of watching these tapes long after the fact and relishing their peculiar rhythms.

One of the richest ongoing gags is that the episodes are taped over old family videos, only seen in the ellipses of crude VCR edits, the home movies’ erasure made even more egregious by the cultural detritus taking their place: toy commercials, music videos, an animated special about the dangers of saying “shut up” (a perfect sendup of the real simulcast anti-drug special Cartoon All-Stars to the Rescue). S.M.A.S.H. evokes the pre-digital era when there was only so much tape to go around, and whatever you were watching stood the chance of never airing again. With this in mind, regardless of whatever ambivalence I might feel about streaming services like Netflix, at least I know I can re-watch S.M.A.S.H. without erasing my wedding video.