Why would anyone do this? 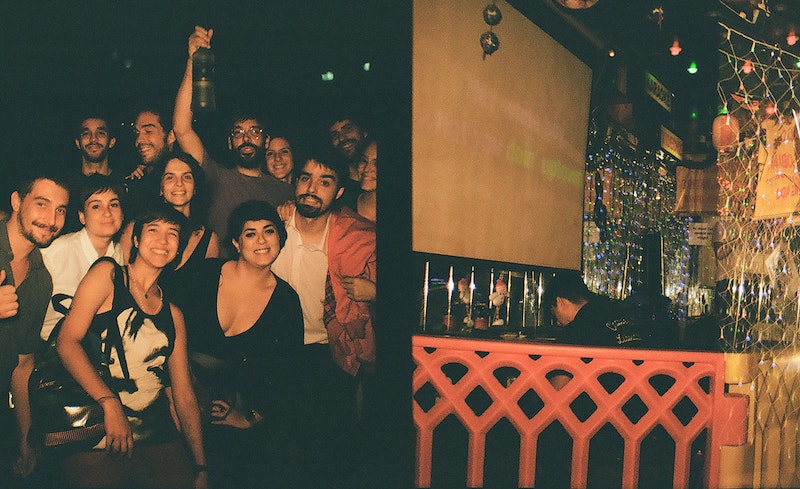 To the casual observer, karaoke should seem like a terrible idea. Most people can't sing. Most people have really bad (or pedestrian) taste in music. Alcohol only heightens these problems, and then adds a litany of other self-indulgent and transparently attention-seeking behaviors. There's nothing quite like watching someone who can't sing or high-kick like David Lee Roth attempt both as they stumble through “Hot for Teacher.”

And yet, karaoke endures. In fact, it's popular with a wide cross section of people, despite the potential for immediate public embarrassment. This fascinates me. It didn't always; I used to hate it and look down on people who liked it. With repeated exposure, I've become less dismissive of karaoke and more curious about its appeal. What compels my friends to sing radio hits from their childhood to a room full of strangers? What makes this fun for them? In a culture that is terrified of genuine vulnerability, what drives people to seek out such a high concentration of it?

Over at Thought Catalog, Josh Gondelman mentions a certain egalitarian streak to karaoke, owing in large part to its casual atmosphere. “There is a lot of freedom to performing in front of people who are not specifically there to see you,” he says, making the point that most of your audience is either supporting their friends or hoping to sing themselves. “In karaoke, everyone is the opening act to everyone else.”

Because there are no audience expectations at stake, Gondelman suggests that karaoke offers “the opportunity for praise and adulation with only the slightest risk of failure.” My earlier statement about immediate public embarrassment is met with the assertion that, at least in his experience, karaoke crowds are pretty forgiving. “You receive a round of applause for getting up in front of the crowd and another for finishing your song,” Gondelman writes. “Karaoke gives you major points just for showing up.”

That's all well and good, but it's anecdotal. There isn't enough scientific heft behind Gondelman's explanation of why anyone, drunk or not, would take this kind of risk in public. Sure, the crowd isn't there to see you, but that also frees them of any obligation to protect your feelings. And even if it feels great once you do it, it's getting over the fear of doing it that's the hard part. This is especially true of singing, where a certain amount of natural ability is a commonly accepted requirement. I mean, Simon Cowell built his reality television career on crushing the hopes of untalented amateurs. The whole idea behind karaoke should scare the hell out of people.

Looking for a more rigorous answer to this question led me to the curious tradition of social singing. Karaoke Around the World: Global Technology, Local Singing, defines social singing as “participatory singing in a public space,” and points out that it's indigenous to many different cultures. The book also suggests that the karaoke format is an easily-digestible script for social interaction. By participating, people identify and strengthen their sense of group membership and belonging, and that understood security feeds into their individual sense of self. Sometimes that's enough to coax reluctant wallflowers into singing.

The book also mentions the “karaoke dilemma,” defined as the struggle between the individual desire for security and privacy (i.e. not singing) and the collective impulse to participate and be part of the group (i.e. belting out “Sweet Caroline” and not giving a shit about how you sound). How one navigates this dilemma depends on the culture one is raised in, but karaoke's dependence upon the safety of a group does explain its allure.

In a study published in Royal Society Open Science, authors Eiluned Pearce, Jacques Launay, and Robin Dunbar credit the popularity of karaoke to what they call the “icebreaker effect.” They posit that karaoke, and social singing in general, is a time-tested method of generating social cohesion in large groups.

This is important because, while people are social animals who want and need to bond with each other, there are only 24 hours in a day, which puts a firm ceiling on the amount of one-on-one connections we're capable of managing. Group-sized social cohesion is a necessary shortcut for emotionally connecting a lot of people at once, and often lays the groundwork for individual connections later on.

This study also found an association between singing and the release of oxytocin and β-endorphin, both of which are associated with social bonding through synchronous behavior. The physical components of singing (breath, heart rhythms, timing, and pitch) and related behaviors like dancing and laughing were shown to elevate β-endorphin levels. Laughing is a big part of karaoke, typically as people realize they still know three-quarters of the words to Salt-N-Pepa's “Shoop.”

To be fair, these results can be replicated by other synchronous activities, which the authors freely admit. But singing is easily accessible—all you need is a voice—and with karaoke you don't even need to know the words. Not only is it convenient, it fulfills a centuries-old biological imperative (socializing) and induces a rush of the same endorphins we get from parent/child bonding and romantic love.

But for all that, the “karaoke dilemma” is hard to overcome for some people. Alcohol helps, which is why American karaoke is so often associated with bars, but the tension between not wanting to look stupid and not caring if you do is heavily informed by cultural and social pressures. I am still working through my own karaoke dilemma, and I may never triumph over it. But at least now I understand why and how other people do.