Prince Was One of Us 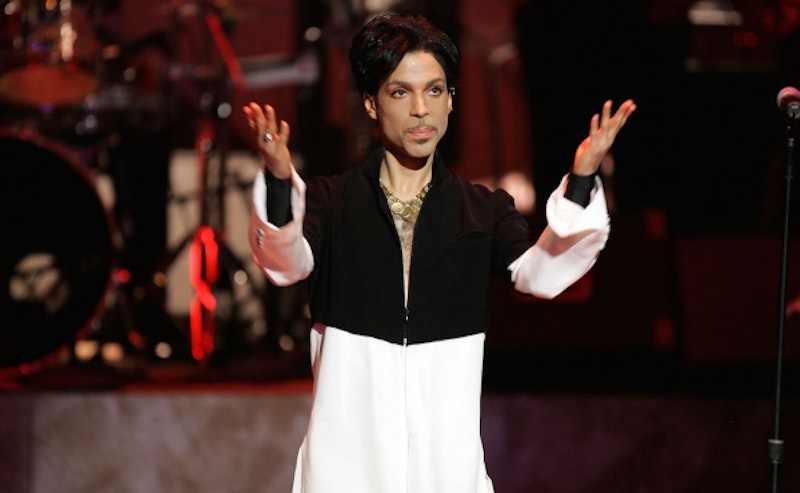 Around 1997 I said something that made a tableful of my officemates sit up and listen. This sort of thing was rare enough that I repeat the episode now. I told them of an interview I’d seen with Prince in Musician. Prince recounted a typical morning. He got up and began brushing his teeth; the motion of his elbow set off a bass line in his mind; with his toothbrush still in his mouth, I suppose, he hurried to his bass and got the line down. But playing the bass line triggered a melody in his head. He found his guitar and worked out the melody. Then he wanted to hear the melody and the bass line together. After an hour and not many minutes, he had himself a song.

“So you read this,” I said, “and you say to yourself, ‘This man needs an editor.’” The table laughed; everyone acted like I was right, and I guess I was. Somehow, when the 1980s ended, Prince’s genius went from a marvel to something steady and undifferentiated that wouldn’t go away. I’ve listened to 10 or 15 hours of the music that Prince made after his great period. Offhand I can remember three songs. “Electric Chair” was fine, and there was his cover of “One of Us,” a beautiful song Prince-ified in a becoming way. And there’s “Diamond and Pearls,” which I remember as the musical version of a sneeze that wouldn’t come off. It always sounded like it would become a song, and then it didn’t.

All right, “Cream” was good. So that’s four. But otherwise Prince’s abnormally prolonged late period struck me as a great sameness. For me, the change hit with the second side of Lovesexy. “Alphabet Street” was delirious and redoubtable in all the ways that Prince had made us accustomed to. “Dance On” should’ve been, but wasn’t. It was just three minutes and 44 seconds of the familiar. Maybe between the album’s first and second side I got that much closer to 27 and lost interest. But ahead of me lay decades of occasionally checking in on Prince’s music and finding that nothing much was afoot. Like Alan Moore during those same decades, Prince showed that a genius could function on a much higher level than the rest of us and still just twiddle his thumbs.

But it was good to know that Prince was alive and being Prince. Consider Charlie Murphy’s story about playing basketball with the star. Murphy discovered that Prince, though five feet two, was as good at basketball as at dancing, singing, songwriting and guitar playing. He was excellent to a degree that was ludicrous, and he had his team running tight. He dropped commands for them, brisk. These were the names of plays, and one was “Computer Blue.” A basketball play with a name like that—that’s Prince.

After the game, he trooped the losing team to his house and served them pancakes. That this is funny is also Prince. During the game, he may possibly have humped the basketball. Of course, that’s Prince. That all these things happened together is very Prince. But possibly the most Prince part of all is that he said “Good hustle” to somebody on the other side. “Yo man, I’m not on your team,” gritted the player, at least as shown on Chappelle’s Show. I think this moment captures the way a lot of us felt about Prince. He combined being the best with being out of step. He ruled, he showed he was supreme, but he was off to the side. His domain was not the social world everyone else shared. When he got the two mixed up, he looked silly. Prince thought everybody on the court belonged to him and they didn’t. That’s why one of the best-known tributes to Prince is Chappelle’s extended eye roll and headshake.

Prince showed what a human being can do. He had the nervous system, the IQ and the temperament to excel, and he lived life exactly as he wanted. That doe-eyed stub was wired to perform better than most of us can imagine, and he followed through. In doing so he appears to have caused little if any harm. A few decades ago he made some of the best pop, rock and funk songs ever heard; even during his dim years he threw off guitar solos that made the air glow. Of course, like any human, he had his weaknesses, and his took the form of just about everything. He was superb and he was a pile of foibles, and even his excellence was often absurd—as silly as calling “Computer Blue” to his teammates or piling up the many, many tracks of Emancipation. Now the great misfit is dead and we’re going to miss him.