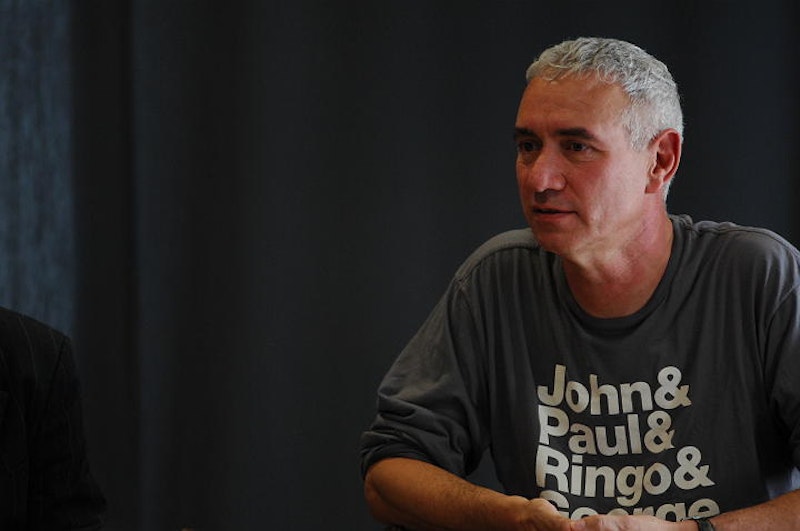 Prince isn’t the only one who combined dashes of Egyptian symbolism, neo-pagan spirituality, gender-bending, and spectacular entertainment. Though Prince was originally from Minneapolis, that combo crops up a lot in Hollywood (Katy Perry’s “Dark Horse” is a more recent example). It even ends up influencing some of the media’s messages about environmentalism, as may be evident in some Earth Day messages today.

I’m not complaining, really, not as long as it spawns entertainment instead of public policy or a bona fide new religion. One particularly interesting example of this pervasive cultural strain—a subtle influence on some very unsubtle films—is the impact of “lost ancient civilizations” theorist Graham Hancock, author of Fingerprints of the Gods, on big-budget sci-fi/disaster director Roland Emmerich.

Hancock hews to the pseudoscientific but bold and just maybe partially correct theory that many megalithic structures such as the Pyramids are far older than commonly believed. The Egyptians as we know them, he posits, may have been little more than a “cargo cult” occupying the ruins of a more advanced (possibly alien-influenced?) culture 20,000 or more years old—a global one stretching to the ruins of ancient Latin America and beyond—which was perhaps destroyed by the sudden melting of glaciers at the end of the last Ice Age, sometime around 10,000 B.C., leaving behind giant ruins we barely know how to replicate, along with numerous variations on a similar flood myth.

As with many quasi-spiritual messages, this one comes with a prophetic warning: The astronomical calendars left by the Mayans and others may have been a hint that such civilization-wrecking eco-disasters are cyclical, a scary thought as we hear of earthquakes in Japan or (baseless) rumors of a UFO crash near the giant and potentially U.S.-erasing Yellowstone caldera.

One possible cause of these recurring disasters in the minds of Hancock and some conspiracy theorists is a planet on the far fringe of the solar system that orbits back through the more familiar central parts of the solar system (intersecting with the central worlds at about the zone where there should’ve been a planet between Mars and Jupiter but is now only the rubble that is the asteroid belt) every 12,000 years or so, bringing with it comets and debris that devastate the surface of the Earth, casting civilization back to savagery, with the vital astronomical warnings surviving only as myth.

There’s no reason to believe any of that is true, but some real scientists are increasingly convinced there’s a far-distant ice giant deserving to be declared “Planet Nine” (given Pluto’s recent demotion), making its way around the solar system on a 12,000 year or so orbit. (Perhaps we should throw the conspiracy theorists a bone and name the planet Nibiru after the rogue world the conspiracy theorists think is returning to kill us. It is also the name of the planet in Star Trek Into Darkness where Kirk violated the Prime Directive and revealed himself to a primitive culture to save them from a volcano.)

What is certain, though, is that if you break this whole theory up into pieces and spend a career making half your films about it, you get much of Emmerich’s oeuvre: StarGate, Independence Day, The Day After Tomorrow, 10,000 B.C., 2012, and so on. Watch for mentions of ancient, not just modern, warnings in his imminent sequel Independence Day: Resurgence (not so unlike the ancient-astronaut messages Ridley Scott worked into Prometheus, really—and the recent panned film Gods of Egypt by Alex Proyas involved a flat-Earth version of Egypt where Horus and other shapeshifting sci-fi-ish gods battle).

(And Marvel superhero films have drawn upon sources weirder than Hancock, after all: Comics writer and superhero film producer Mark Millar is friends with David Icke, the UK conspiracy theorist notorious for thinking reptilian aliens are secretly invading the planet, an idea that Millar says influenced the alien invaders in the first Avengers movie, who were reworked versions of Marvel’s shapeshifting reptilian aliens the Skrulls.)

But then, comics are filled with various theories about life in ancient times, as DC Comics’ impending revival of Flintstones and Space Ghost remind us—not to mention the current series Scooby Apocalypse (I swear). In a world where we really do dig up the occasional baffling, ancient giant sphere, who’s to say there isn’t a grain of truth in all of these things?

Maybe I should start assuming the most dire prophecies are true. Then again, I owe the world a correction of one prediction already: In an earlier column, I mentioned plans to build replicas of the Temple of Baal around the world, but it appears they’ve changed the plan to a reconstruction of the less-weird Arch of Palmyra. Feel free to denounce me as a false prophet this coming Tuesday night in Brooklyn if you come to my book talk.