I mean, he’s a narcissist or something. 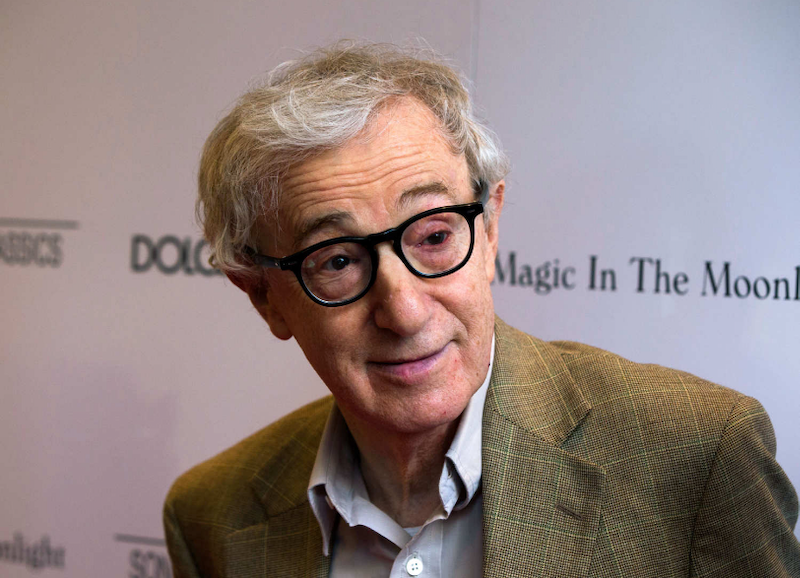 From Jezebel: “In 2013, Firth appeared in Allen’s film Magic in the Moonlight, where he plays an English empiricist who falls in love with an American romantic.” Here I post a small personal footnote to the tumult over #MeToo. It’s this: the Woody Allen film described above sounds horrible in the same way as so many Allen projects. He has a leaden, clod-hopping mind, and this failing stands forth in his scripts. Hollywood has disgraced itself by pretending otherwise. So have generations of white-collar audiences, the dupes who bought dinner and Allen’s 90-minute, black-and-white tasteful bushwah and told themselves it was a night of culture. Hannah and Her Sisters is a tombstone of the soul, and the same goes for Crimes and Misdemeanors, Husbands and Wives, the first seven minutes of Midnight in Paris, and the first three of the Barcelona movie. (I’m discussing here what I can remember seeing.)

Now Allen’s time may be up. Stars keep his career afloat, according to The New York Times, and some are making noises about not appearing with him again. If he can’t round up stars, Allen has nothing to sell distributors but his box office record, which is poor. Will the stars drop Woody Allen? We wait to find out. In the meantime, Team Allen talks bitterly about the mileage given the enemy by #MeToo. Allen has outlasted previous downturns in box office, and previous bouts of bad press. But this time he’s 82. If the stink is on him, the stink may live longer than he does.

The bad smell has to do with sex, if you’ll forgive the phrasing. Allen’s name has been blighted by the personal behavior alleged against him. The stars have nothing to say about the movies themselves. For my part, I feel the need to record that Manhattan is a turkey, and that having teenage Mariel Hemingway in it merely underlines why. I submit that Allen’s clod-hopping stupidity as a screenwriter, and as a director of actors, is a function of his having a flat soul. His soul, or psyche, didn’t come out right, and there are simple things he can’t do, and one is to see himself. He created a film in which he appeared alongside Mariel Hemingway, and he felt no need for an explanation as to why she bothered with him.

In this same film there’s a scene where Wally Shawn is held up as prima facie evidence of what a fabulist Diane Keaton is. Keaton, or her character, has talked about the brilliant, dominating, sexually voracious Donny, and what we get is an ugly, short, nervous fellow in a corduroy jacket. Well, yes, Shawn is uglier and shorter than Woody Allen, but not by much. If Allen can land Mariel Hemingway and make her like it, maybe Shawn could do the same for Diane Keaton. Allen never thought of that.