Ted Arcidi and the Enduring Quest for Mass

Arcidi, a slow-moving block of granite, had the body of my dreams. 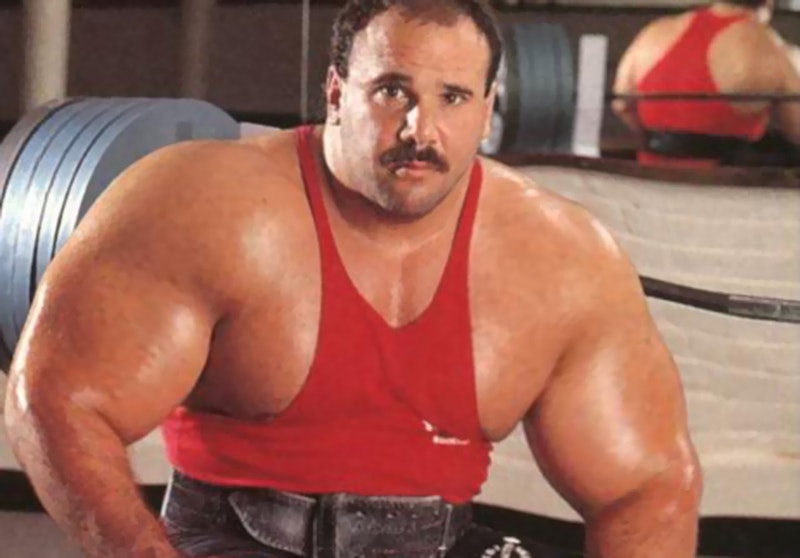 Ted Arcidi, I remember you, albeit dimly. Big, brawny mid-carder. One of the few LJN Wrestling Superstars action figures I didn't own. "Mr. 705-pound bench press.”  You wrestled entire matches that consisted of nothing more than bear hugs and tests of strength. Putting aside the completely untalented 400-pound Jeep Swenson, you represented the apotheosis of the immobile, bodybuilder-style wrestler that "Superstar" Billy Graham and "Polish Power" Ivan Putski brought into vogue.

Vince McMahon's initial vision for his father's federation still fascinates me. Back before he launched the Attitude Era by ripping off Paul Heyman's idea of making all of the top wrestlers wear jorts and wallet chains, Vince desired mass and lots of it: both on himself—look at how he fills out those 1980s power suits!—and on everyone who worked for him.

Olympic weightlifter Ken Patera, nearing the end of the road in the late-1980s WWF, recalls in an especially revealing Highspots interview how Vince approached him, squeezed his thigh, and told him he'd gotten a little soft. It was at this point that Patera—who along with Tony Atlas, "Big" John Studd, "Hercules" Hernandez, Paul "Mr. Wonderful" Orndorff, Billy Jack Haynes, the Ultimate Warrior, Don "the Rock" Muraco, Jesse "the Body" Ventura, and "Hulk" Hogan had formed the heart of Vince's beefcake brigade—decided to hang it up.

Arcidi's WWF career ended with even less ceremony. In the overcrowded field of behemoths mentioned above, he was the odd man out. He was too short, an inch or two under 6’, not to mention a bad wrestler even by the lackluster standards of the WWF product in those days.  After leaving the WWF, he briefly held the Texas Heavyweight Title in Fritz Von Erich's World Class Championship Wrestling federation (by then rebranded the "World Class Wrestling Association" in one of several last-gasp efforts to save the doomed promotion).

I've never seen any WCCW/WCWA programming from that era, but I imagine the shows must have been akin to those AWA studio matches with almost no spectators that aired on ESPN near the end of that federation’s run. From the WCWA, Arcidi appeared on a few TV shows, operated a gym, and somehow managed to avoid the heart failure/drug overdose finishing move that put so many of his contemporaries down for the long three-count. Good for him.

Not so good for me, though. And, by extension, probably not so good for other young men who grew up during a decade when the "bodybuilder ideal" McMahon championed was popping up everywhere: in action movies, on the football field, and even in the White House. I watched these hulks ply their trade, and I wanted to follow suit.

I aspired to become a truly gigantic human being, someone whose thighs bulged out of his Zubaz pants and whose arms could not be contained in any shirt that had sleeves. But why? What was the point of this desire? No bully ever kicked sand in my face, and I wasn't trying to win the heart of some unapproachable girl who wouldn't give the time of day.

For many years, I "pumped iron" for the same reason that a hamster spins on its wheel, and with a precisely similar result: I got nowhere. Well, not exactly. I suppose that, by whatever the normal standards of human musculature are, I was a relatively well-built person. Nevertheless, whenever I looked in the mirror, I saw this pathetic shred of a man who didn't resemble Ted Arcidi in the least. Why wasn't I raw-benching 705 pounds? Why couldn't I insulate my skeleton with 300 pounds of hypertrophied muscle?

I succumbed to a strange kind of cultural pressure, much like anyone else who becomes obsessed with some pointless but well-publicized activity and pursues it in a joyless, routinized manner. Granted, I had serious body issues, though these had nothing to do with the actual functioning of my body. My issues concerned developing the sort of rock-hard physique that a well-placed, well-connected meathead like Vince McMahon would respect and admire.

In my dreams, I’d have a body so fantastic that I'd never find myself in a situation where Vince, engaged in his daily inspections, would have to pinch my thigh and inform me that I was getting a little soft. I'd have a body so unbelievable that Vince would take one look at me in my vast and ineffable hugeness and say, "Oliver Lee, you're going over tonight. You're pinning the One Man Gang in the center of the ring, 1-2-3." I'd have a body so perfect that it would send thousands of young men rushing to their bathroom mirrors, pinching the flab on their bellies and wondering why they didn't look like me.

It was a pretty ridiculous fantasy, all things considered.