Hotels in a punishing tech environment. 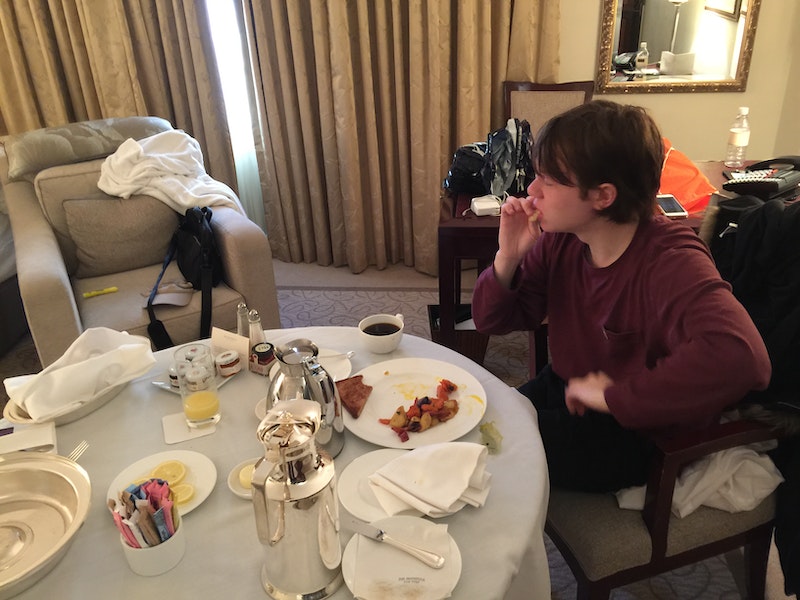 Sometimes I wonder—not worry—about the hotel industry’s future. Will Airbnb ravage the country’s leading establishments, just as Uber is poised to put cabbies out of business in five years or less? It’s a matter of demographics: just as every day, when passably literate people die, print newspapers and magazines lose customers, habitual hotel guests are, I’d guess, north of 50, and that’s not an enviable actuarial reading. It’s becoming less and less baffling to me: while it’s astounding that anyone would use Uber in, say, a cab-rich location like Manhattan, the sales figures don’t (unless there’s some serious cooking of the books) usually lie. My 21-year-old son, who goes to college in D.C., will use Uber instead of a cab when the weather is too inclement to walk. Similarly, when planning road trips, he books an Airbnb instead of a hotel or motel. Sure, he’s a young fellow, and doesn’t have a lot of extra dosh to throw around, but I don’t get it. I’d sooner take refuge in the back pews of a church than entrust my safety to a potentially dicey Airbnb.

I’m 60 now, and I’ve used the same travel agent—an all-but-dead business—for over 30 years. I’ve no interest in taking to the Internet and going through the rigmarole of comparing prices of hotels or airline flights when I can pawn off that duty to my friend Marv, at no charge to me, and let him work his longtime relationships for satisfying rates and service (at hotels, that is, traveling by plane is for the dogs, which we all are, by necessity). But Marv’s older than Bob Dylan, and he’s in semi-retirement; as it is, getting hold of him in Florida, where he golfs almost every day—and bravo for his health!—is no easy trick. When he throws in the towel, professionally that is, I’m sort of screwed.

My boys and I stayed at Midtown’s grand Peninsula Hotel for a few days last week, and while the stay was delightful—it’s helpful when you’re a repeat guest—I mused one night, while looking at the absurdly-priced menu at the hotel’s restaurant, that this sort of luxury cannot hold, at least in the numbers that it requires to make such a business profitable. One example: how have hotels, which used to commit legal larceny with their surcharges for telephone calls, made up for the revenue lost by virtually everyone using cells? It wasn’t so long ago—2006 at Mumbai’s Taj Mahal Palace—when I unknowingly ran up a monstrous bill by using its shaky Internet service to follow a Red Sox game on ESPN, about 90 minutes of it, anyway. The next morning, my brother Jeff, who was footing the bill, gently chided me, saying that the cost of my leisurely activity was more than the price of my room for the night. I was floored, and was appropriately sheepish at lunch (and lamb’s head was on the menu, which I thoroughly enjoyed!) and learned a lesson. I haven’t been back to India since then, but as another brother reports, free Wi-Fi has finally made it to the country’s bigger cities.

Some hotels have done away with mini-bars, which is mystifying, since they’re such a cash cow. Open the fridge, and if you even graze a bottle of water, or beer, it’s automatically charged to your room. Those who’ve scrapped the mini-bars are crying surrender, if you ask me, but it could be the accountants have figured out something I don’t know. Hotels are also far more lenient about bringing in outside, and far cheaper, food to your room; at one time, you’d get a double hairy-eyebrow from the concierge if you pulled that stunt.

Then there’s room service, which I fear is going the way of the rotary phone. Truthfully, in recent years, I mostly eschew this convenience, walking out before dawn to find coffee for a fraction of the price, although I’ll often get a refresher pot later in the morning. But the dinner and lunch options? Skip it: the food ain’t great and I’m just not going to pay $35 for a Cobb Salad when there are so many restaurants to choose from, no matter what city you’re in. My son Nicky, 23, is of a different stripe (which blows the mind of his younger brother Booker, who brings in Pret a Manger oatmeal or sandwiches), as he automatically, upon waking, puts in his call for a full breakfast, which he happily munches while watching CNN. Granted, when Nick’s on tour with his band, sleeping on couches and eating at shitholes, it’s a different story, but when the old man covers the bill, anything goes. Nevertheless, although I use room service less frequently now, I like having the option.

When I was a sprout, and our family of seven piled in the station wagon to drive from Long Island to New Hampshire, where my cranky grandfather lived, we stayed in cheap motels, which was fine by me, since it was an adventure and the accommodations were roughly the same as our house. The payoff on those New England trips was a dinner of fried Ipswich clams, which we all loved. In fact, I’d never even seen a mini-bar until 1975 when, staying at Le Meurice in Paris—I was minding my young nephew and niece—there it was, full of beers I’d never heard of. I thought they were compliments of the room, and nearly emptied it, until informed by my oldest brother that it wasn’t a freebie. Thinking back to that splendid excursion—just one night, unfortunately—I’m not embarrassed to lay bare my dotage in noting that the well-appointed rooms went for just $100 a night.

More than a decade later—flying was still fun—when I’d amassed a decent bank account, my wife Melissa and I traveled often (Bangkok, Hong Kong, Berlin, Vienna, numerous trips to Italy, and of course London and Paris, by Concorde sometimes, when the deal was favorable) and didn’t think twice about phone calls, room service or hailing a cab. I believe those days—like the near-extinction of the steamer taking you from New York to Europe, with those trunks affixed with labels from different ports of call—are in peril. Not that I lose sleep fretting over the fortunes of hotel owners (mostly corporations at this point), but it’s just another segment of once-modern culture that’s disappearing.