Don’t Talk to the Animals

Nor the ghosts, etc. 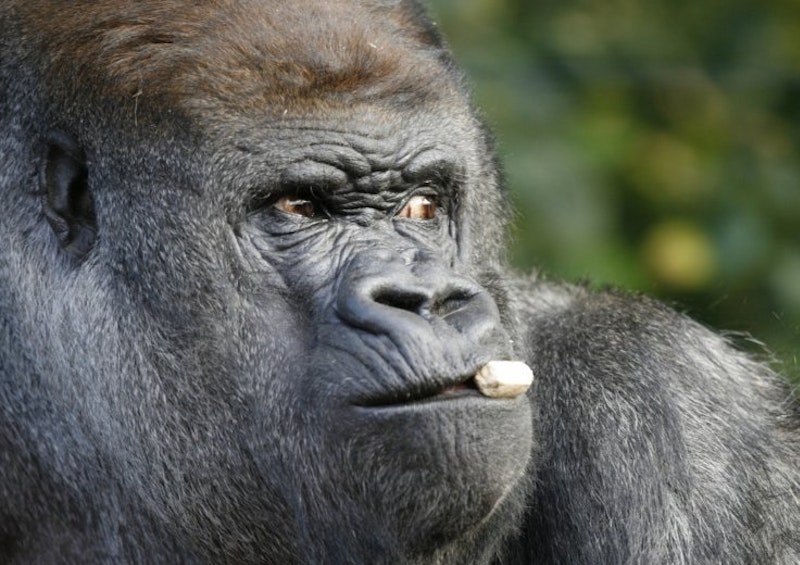 I was so relieved to see Gawker and others mocking Koko the gorilla for purportedly denouncing global warming. Koko is just part of a much larger problem, though, one that does indeed suggest “Man stupid,” as Koko is supposed to have said via sign language.

As YouTube commenter Nicholai Senchuk rightly put it, you know “humanity has failed when people take advice from a fucking gorilla who doesn’t know shit about the world.” True! But the more basic question is whether Koko is even dispensing advice to begin with. Koko’s handlers have been slicing and dicing her quite minimal hand signals into elaborate messages for years—even releasing a rap album under her name at one point, in a move fraught with troubling racial implications.

As my media studies professor friend Read Schuchardt has observed, if Koko happens to sign a few useful fragments, her handlers will be sure to tout her genius and compassion. If she signs something closer to “me banana red grass,” that’s different. Her handlers would have us believe she was even informed of and mourned the death of Robin Williams. There’s no clear sign she understands complex constructions much beyond the one-word-at-a-time sort that a smart dog might also grasp, let alone understands the rate of global carbon emissions and how long it would take a regulatory response to have an impact.

For millennia, hucksters, tea-leaf readers, and prophets all the way back to the Oracle at Delphi have been getting away with this crap, quite often through the not-so-magical combination of highly ambiguous symbols and a gullible audience’s wishful thinking. If the audience believes it’s morally elevated by seeing what it’s supposed to in the “message,” so much the better for getting them to fall for it: the just slightly “moving” religious statue, the completely paralyzed patient’s testimony of love to one of his medical attendants that no one else can detect, advice-giving horoscopes, and the purported warnings of the babbling Nostradamus.

If Koko is suddenly mocked, it probably means that the air of untouchable spiritual importance around messengers of ecological catastrophe has worn off a bit. Twenty years ago, even if people said a ham sandwich was warning people about ozone depletion, you probably would’ve been guilt-tripped for questioning the sandwich’s wisdom.

The far broader lesson should be that it’s reckless to read too much into scanty evidence. That’s how you end up getting duped.

I watched with amazement as that boy who was near brain-dead on the operating table for a while had a best-seller on the book charts for what seemed like, well, an eternity, purportedly describing the glimpse of Heaven he’d gotten while he was on the verge of dying. Millions of copies later, it was all admitted to be a scam—but where was America’s skepticism during the long preceding months, when the boy’s family was claiming there was no imaginable way the young lad could have dreamed up the vivid Heaven imagery he described and no reason to believe he would make up such things—even though his dad was a preacher! For crying out loud, people, what wouldn’t you fall for?

I’m looking forward to the return of Fox “I Want to Believe” Mulder on The X-Files this Sunday as much as the next person, but Mulder’s mantra is no way to live. Keep in mind, too, that we likely have instincts luring us toward certain bogus conclusions because they excite the fear or pleasure centers of our brains for reasons having little to do with their truth.

A crank like David Icke, who spreads the idea that evil “reptilian” aliens secretly control the Earth, gets as far as he does in part, most likely, because we are the product of millions of years of snake-avoiding instincts (likely also an influence on the Garden of Eden story). Our relatives who were less prone to avoid reptiles died of venomous bites in higher numbers and were less likely to leave offspring. The same goes for the ancient relatives of those poor cats whose owners prank them by placing long, green zucchinis next to them and then show the frightened cats to the world on YouTube. Then again, if you believe you are yourself a reptilian, Stephen Lawless brings to my attention a dating website where you can meet others of your own kind.

It’s worth noting, by the way, that our seemingly recurring fear of Bigfoot might also be instinctual, even if the only hairy foes faced in our ancestral environment were five feet tall—since the relevant instincts may have been selected for back when our justifiably frightened ancestors (who would live to breed another day) were a mere four feet tall. Or it could just be a generalized fear of big, dark potentially rivalrous shadows moving in the woods. People read significance into ambiguous yet meaningless signs—creaky floorboards, falling stars—as eagerly as they do into animal behaviors and funny-shaped clouds.

And while we hang on the next word from a gorilla, there’s a homo sapiens woman in New Jersey threatened with jail time for feeding two abandoned baby squirrels she took in without a permit to house wildlife. Man stupid, all right, in part because he still thinks nature, oh precious and sacred nature, is magical. If that poor woman ends up in the big house because Jersey can’t abide unauthorized squirrel-touching, I hope her handlers at least teach her sign language so she can amass supporters.