The new American lexicon calls for Satan to sharpen his pencil. 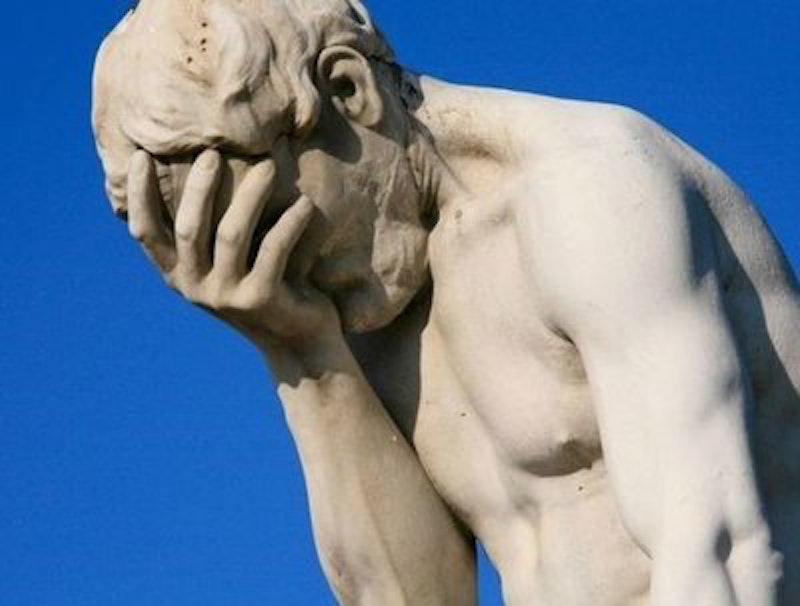 A simple, but often reliable criterion for evaluating the sanity of any particular culture is the general public’s level of eloquence, precision of language, and preferred terminology. The fashionable lexicon of American academics and commentators reveals a calamitous cultural condition. America has entered an age of mediocrity. Practitioners of identity politics demonstrate a mission creep movement from reasonable concerns to a state of absurdity so complete, they become impossible to parody. The eradication of epithets and the insistence on more sensitive and respectful labels for disabled people—two just examples—have morphed into pathetic pursuits like policing Halloween costumes, prohibiting the phrase “all lives matter” from political discourse, and condemning any teenage male who leans into his female companion’s space for a kiss as a potential rapist.

In such an oppressive climate of speech regulation and emotional blackmail, language loses all meaning. The “clerisy”—to use Joel Kotkin’s term for the new social dogma enforcement regime—divorces words from their context and the speaker’s intention. When words no longer have the utility of accurate signification, conventional definitions lack the ability to inform or instruct.

Ambrose Bierce, the great short story writer and journalist, identified a problem of hollow language in the early 20th century, and aspired to alleviate the societal burden of confusion with the compilation of a satirical lexicon, The Devil’s Dictionary. Over 100 years after its initial publication the rich irony of Bierce’s achievement is that many of his definitions continue to function with greater clarity and efficacy than anything available in Webster’s. For example, politics is “a strife of interests masquerading as a contest of principles.” Debt is an “ingenious substitute for the chain and whip of the slave-driver.” Even when harsh, Bierce communicates uncomfortable truths most readers would rather not confront, such as when he defines “patriot” as the “dupe of statesmen and the tool of conquerors.”

The new vocabulary of mediocrity currently polluting the American atmosphere calls for the devil to sharpen his pencil, and delineate definitions more honest and representative than what explicators of contemporary jargon believe they’re illustrating.

Mansplain: Feminists believe this term is a clever denunciation of men who condescend to women by explaining simple concepts they already understand. While male to female patronization is certainly real, it’s undeniably less real than it was decades ago. Women now graduate college at much higher rates than men, they hold a majority of managerial positions, and the most eloquent speakers from each party in this year’s presidential campaign, are women.

Considering that it is men, not women, who are failing in the contemporary educational system and economy, “mansplain” needs a more accurate definition. It’s actually a term that functions as a weapon ready to kill debate, and deflect attention away from anything that contradicts campus feminist orthodoxy. For example, I was once accused of “mansplaining” for simply stating the fact that the 77 cents on every dollar wage gender wage gap is a myth. The real reason men make slightly more money than women is because college-educated women gravitate toward lower paying service professions, such as social work, nursing, and teaching, while college-educated men seek careers in STEM fields. That my information came directly from a woman—the inestimable Christine Hoff Summers—made little difference to my heckler. Similarly, an academic recently accused historian Thaddeus Russell of “mansplaining” throughout his book on underground culture’s influence on American politics, A Renegade History of the United States. One would suppose that since Russell is a man who, as a scholar and social critic, explains things for a living, the charge is accurate, but meaningless and redundant.

The new definition of “mansplain” should read “A man stating an opinion that is objectionable only on the basis of the speaker’s gender.” Such a definition would expose the word for its superficiality, and explain why no one has ever accused Hillary Clinton, Carly Fiorina, or Summers of “womansplaining.”

Whitesplain: As America becomes increasingly comfortable with ugliness, as well as emptiness, of language, pundits and professors have taken an already awkward word (see above), and made it even worse. “Whitesplain” is meant to mock white people who explain the world to black people, as if they are incapable of understanding anything complex or contradictory. While idiotic white underestimation of the black intelligence is a long running problem throughout American history, such bigotry is no longer acceptable, with good reason, in mainstream culture.

“Whitesplain” is nothing more than a terminological tactic to mute any white contribution to the everlasting “conversation on race.” Commentators never tire of demanding a dialogue on race relations, but the dialogue is only supposed to amplify certain pre-approved viewpoints. Matt Damon—clearly a segregationist of the Wallace stripe in disguise—received the digital tar and feather treatment as a “whitesplainer” for defending his own competitive reality television show’s meritocratic system of contestant selection against demands for more diversity from Effie Brown, a film and television producer.

In a recent dust-up over some inconsequential topic related to the “music” industry between Nikki Minaj and Miley Cyrus, critics accused Cyrus of “whitesplaining” to Minaj. The subtext in both cases is that white people are no longer permitted opinions on issues of race, diversity, or culture.

“Whitesplain,” like “mansplain,” enforces an orthodoxy. Considering that it’s unlikely Thomas Sowell, Shelby Steele, Amy Holmes, or Sen. Tim Scott will ever face condemnation for “blacksplaining,” the real definition of “whitesplain” should read, “A white person stating an opinion that is objectionable only on the basis of the speaker’s race.”

Concern Troll: Here’s another nonsensical phrase demonstrating the debasement of language a culture suffers when it no longer values literacy and literature. It’s meant to denote someone who poses as an ally to a particular cause only to sneak in criticisms, and subtly sabotage the progress of that cause. In reality, it refers to someone who dares to utter an independent thought containing anything close to nuance.

Hillary Clinton was not actually an astute veteran of politicking when she advised Black Lives Matter activists that they prescribe a policy agenda before they pressure candidates to adopt their platform. She was a “concern troll.” John McWhorter wrote an essay posing questions for the Black Lives Matter movement over disproportionate attention to police brutality, in his view, and the ignorance of their communication strategy. He was not a social critic attempting to analyze the attributes and flaws of a social movement, but a “concern troll.”

A “concern troll” is one who deviates, even slightly, from the party line of a popular, politically correct position.

Mic Drop: In yet another hideous contribution to the American vocabulary from social media, “mic drop” refers to a moment in which a speaker makes a point so powerful and profound that he or she could drop the microphone, leave the stage, and render everyone else helpless to form a rebuttal. The problem with this term is that enthusiasts typically attach it to moments where the speaker is without challenge in the first place. With the exception of the late Christopher Hitchens demolishing Chris Hedges to the point that Hedges declined to even reply to Hitchens’ closing statement in a debate, I’ve never seen a “mic drop” moment occur before someone who is capable of response.

“Mic drop,” therefore, becomes a consolatory device among a mutual admiration society of social media users reassuring each other that they are right in all their positions, and flawless in their articulation of those positions. In another effort to silence opposition, the average user of the term embraces the implication that no alternative to his philosophy exists. The actual definition of “mic drop” should read, “A moment when a speaker repeats conventional wisdom to a friendly audience without rebuttal.”

Privilege: An entire worldview and vocabulary begins with bastardization of the word and concept, “privilege.” While it’s certainly true that in any society, certain groups of people have much more privilege and advantage of others, and that one of the duties of republican governance is to ensure equality of opportunity, the fashionable use of the term to delineate an ever expanding and evolving roll of victimhood is in itself a mechanism to privilege some groups over others. It also allows for the evasion of responsibility, and escape of inquiry. “Check your privilege”—a popular but phony retort on college campuses and social media directed at anyone who questions liberal orthodoxy—is a way to shame and guilt people into muting their own arguments. It’s not an intellectual tactic of debate as much as it is an attempt at emotional humiliation.

Something far more insidious transpires when “privilege” becomes the focal point of political discourse. A friend of mine who spent years counseling addicts explained that the addict’s worldview, and self-justifying philosophy, begins with the word “wronged.” If addicts were “wronged,” or if they can, at a minimum, convince themselves that they were “wronged,” they can rationalize any behavior that follows.

Current use of the word “privilege” begins by defining privilege downward. Occupy Wall Street, for example, castigated the “one percent” for inflicting irreparable damage on the nation’s economy. Many of their arguments were sound, but at no point did anyone acknowledge that most Americans are part of the global one percent, and the historical one percent. According to any measurement—health, life expectancy, prosperity, general welfare, opportunity, education—any inhabitant of the Western World is in the elite of world history.

The privileged status of Americans does not mean that activists—from the right or left—have no right or duty to condemn injustice whenever and wherever they believe it exists, but the steady debasement of “privilege” now means that students at Ivy League medical schools can, with the grace and subtlety of projectile vomiting, hurl the accusation of “privilege” at fellow classmates. A recent video of a white man in Brooklyn insulting another white man in Brooklyn for acting with “white privilege” perfectly illustrates how the absurdity of privilege obsession, among privileged people, has no endpoint.

Those who invest their intellectual energy into the fixation on who possesses more privilege are surrendering their individuality and ability to assert themselves to enter a comfortable state of social sympathy. More than offering instructional delineation of illegitimate hierarchies that exist in societal institutions, the word “privilege” now denotes who has the right to speak on issues of social consequence, and who should remain silent. “Privilege” is an insult, and social shaming tactic, levied by one privileged group against another.

It’s unlikely that those who deploy the above terminology without irony are correct that the United States is a dystopia where countless tragedies take place at every second, but even the most objective observer would have little means of evaluation, because the current state of debate is often no debate. The urgency to shame into silence anyone who deviates from politically correct doctrine renders honest and illuminative discussion impossible. Far worse for American culture, it ushers into every institution a pathetic paternalism where those without “privilege” need constant protection from every potential “microaggression.”

A culture of mediocrity replaces a culture of meritocracy, because anyone who rejects intellectual scrutiny, cowers from debate, and insists on eternal uniformity and conformity to conventional thought, will eventually and inevitably become mediocre. The mediocre might begin as unwilling to face any challenge, but soon become unable. “Trigger warnings,” campus speech codes, and protests against unwanted campus speakers only weaken those that they aim to protect. When I was in college, one of my favorite professors began a philosophy course by announcing, “I’m not here to nurture you. I’m here to strengthen you.” If only such thinking could begin to operate throughout the curriculum and the culture, Americans might begin to measure their progress.

—David Masciotra is the author Mellencamp: American Troubadour (University Press of Kentucky), and Metallica (a 33 1/3 Book from Bloomsbury Publishers).