Manhattan’s packed for the holidays, but no one’s there. 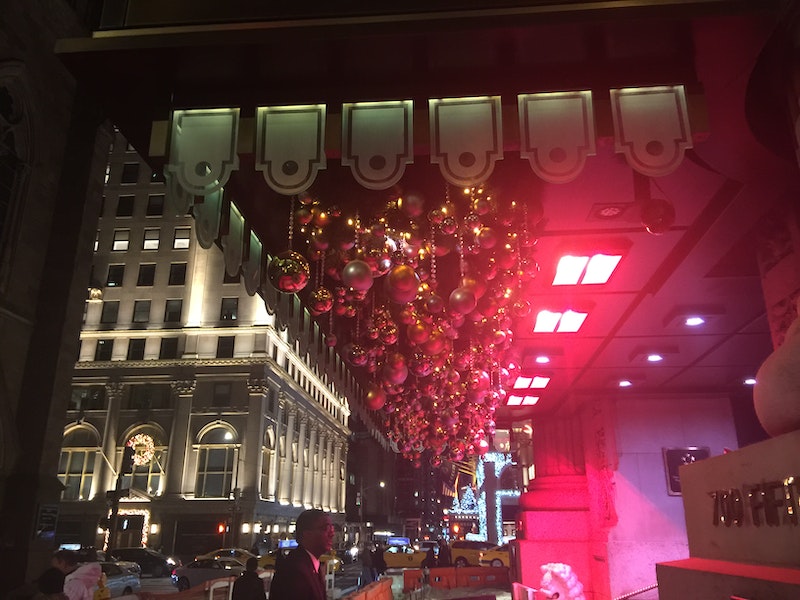 Last week I spent a few days in Manhattan, and it wasn’t even 30 minutes after arriving at a jammed Penn Station—looking less dilapidated than usual—that I noticed on a lengthy walk that garbage bags were piled high on the sidewalks of every street. I immediately assumed there was a sanitation worker strike in progress, for the clutter reminded me of the city in the mid-1970s, but my son Booker, who lives in midtown, shrugged it off, saying, “Tomorrow’s garbage day.” He was winging it—Mr. Wizened New Yorker—for the waste wasn’t removed by the time I returned to Baltimore. It was cold, so the aromas were muted, and, in any case even in the summer when the dumpsters for the numerous restaurants near our Tribeca loft back in the 1990s were rather ripe, a rat’s permanent holiday, or the excretions of bums or late-night revelers who couldn’t handle their Patron tequila, it didn’t bother me. I simply found it curious, wondering if the unpopular Mayor Bill de Blasio is in for a real thrashing in the New Year.

The traffic was the worst I can remember—and it was always bad—on the level of the Cairo I recall from an excursion there in 1987, or Mexico City in ‘75— although that was sloughed off by cabbies and people I queried on the subject as “Everyone comes to New York during the holidays.” That remarkable explanation I understand, having lived in the city for 16 years, and indeed the streets were shoulder-to-shoulder with tourists, workers and residents (moving like snails, I might add, which always bugs me: when my boys were young and we’d wander around the East Village I instructed them to “find the hole,” which they took to heart and are, like me, brisk pedestrians), but the volume of human flesh outside didn’t square with the lack of customers at local retailers, both high- and low-end.

On Madison Ave., braced for the worst, I ducked into a world-renowned luxury establishment to browse for a present, and there were just three other customers at three p.m. The service, notoriously snooty in the 90s, was superb; so uncommonly friendly that it made me think I was in Savannah, Georgia. After making a purchase, I half-expected the cashier to invite me upstairs for a restorative, holiday mug of cocoa, topped with miniature marshmallows.

At Barneys, the jingle-belled throng was a touch more robust—it is a department store—but not so much that a saleswoman didn’t spend 10 minutes yakking with me after taking a credit card for two tubes of Kiehl’s facial cream—I have dry skin, and this is the best relief—about any number of further remedies I might try. My protests that I found additional beauty products beyond the ken fell on deaf ears, as she replied, in hyper schmooze mood, “Oh, but honey, your skin is so beautiful; I mean I’d die for those hands!” It was easily the best laugh of the day, since my very fair skin is nothing to behold, especially at 63, and my hands in particular are more notable for a lifetime of scars and popping veins than anything that could be remotely deemed attractive. What the hell, she had a job to do, was bored, and our animated conversation was simply swell.

Likewise, one day I was downtown, and the forbidding skies just after noon—was this Berlin?— contributed to a feeling of isolation: I wandered around The Strand (unfortunately fiscally hampered by a “landmark” designation that might, counter-intuitively, cause the bookstore to close) and it, too, wasn’t racking up the sales, which struck me as weird, for books—especially the hard-to-find volumes not available on Amazon—are, happily still a ubiquitous Christmas present. I was distressed that Generation Records, on Thompson St., was also empty, although that wasn’t a patch on the store’s depleted stock, and prices for used vinyl that have soared. I brook no dissent whatsoever on the quixotic declaration that independent stores need support, but when you’re selling a beat-up copy of Paul Butterfield’s East-West for $29.99, it’s time to haul out the life jackets.

Less surprising was the tepid reception a beefy fellow selling “Trump/2020” banners was met with on 5th Ave. I briefly considered making a purchase as a joke Christmas present for my son Nicky, but my fingers were numb from the wind, so I reluctantly passed on the opportunity.

Not everywhere was hurting for customers: the Dunkin’ Donuts down the street from The Peninsula—my hotel of choice in NYC, and, I must say, no busier than usual, as my room, reserved just a few days in advance, was ready for immediate occupancy—usually had a line of seven people, whether it was six a.m. or three in the afternoon. One night Booker and I dined with longtime colleague and family friend Michael Gentile at Soho’s Coco Pazzo (which took over the space of the bar Milady’s)—a restaurant of the moment, less than a year old, where tables are scarce, and the quarters close, so much so that one time when I retreated outside for a smoke, my chair backed into that of a smartly-dressed young woman who gave me a rather unseasonable stink eye. Good thing it was noisy, since I belted out of a chorus of the Stones’ inexplicably unreleased “Cocksucker Blues” for the benefit of my companions.

The Italian food is exemplary, though, as was the service, and if I had a bout of intestinal bother the next day it was my own fault: I once had a gut of steel, but no more. My meal of steamed clams and lasagna with a rich Bolognese sauce was delicious, even if upon ordering it, I was reminded of many nights at restaurants in the 1980s and early-90s, with my brothers or friends—Sparks, Primavera and Le Madri, to name a few—when you knew if partaking of a stogie and unnecessary brandy after the meal guaranteed a wicked day after.

And I’d imagine holiday parties are drawing crowds, and business, to local bars and restaurants. (Pardon the instinctive dig, no loner apropos, at the Village Voice, which celebrated Christmas with a cash bar, a tightwad move that never ceased to befuddle me.) I attended Booker’s company shindig at the Irish pub The Globe—where, excuse the immodesty, my son won an award—and was hoarse the next morning after chewing the baseball and political fat with his boss, a rabid Yankees fan, which is usually trouble, but he laid out a velvet opening by admitting the 2018 Red Sox were a marvel. He’ll be attending one of the two nutty Sox/Yanks games in London next June. That long road trip cheeses me off—especially since both contests are counted as Sox home games—but more on baseball, and Boston’s difficult chances to repeat their World Series victory, in a few months.