Third Season of F Is for Family Isn’t So Hot 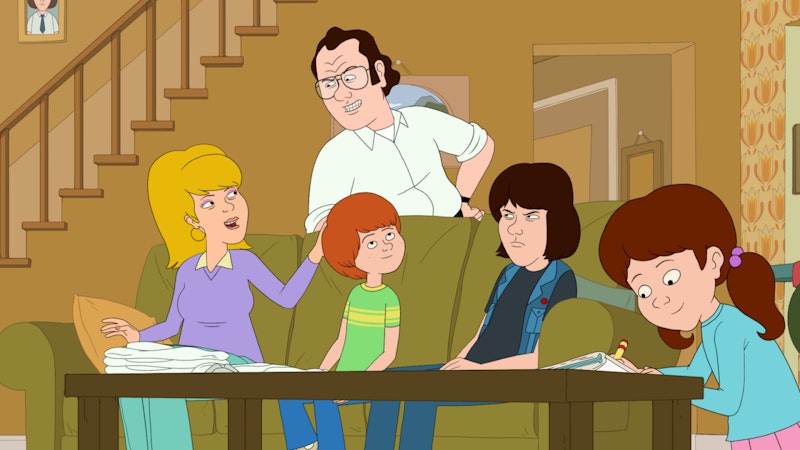 Bill Burr, the pugnacious but undersize stand-up comedian, often sounds like a carburetor scraping across the ground. The same effect is produced by F Is for Family, his animated sitcom on Netflix, as the show grinds through a third season. F tells the story of the Kellys, a working-class family enduring the 1970s. Seasons one and two were noisy but fine; this one grates. Sue (Laura Dern) keeps pushing a lousy invention, and that’s her subplot—being stuck. Young Kevin (Justin Long) is suddenly dumped from his band and then yelps and acts out. Frank (Bill Burr), the dad of the family, has a plot that’s interesting: his man crush on a neighbor (Vince Vaughn) who turns out to be unstable. But the plot is a couple notches less intense than Frank’s previous storylines, in which he battled for survival and self-respect. Not only that, it resembles the storyline the season gives Billy (Haley Reinhart), Frank’s younger son. Billy has a crush too and the crushee is another psycho.

There’s more, because F Is for Family is a busy show. But it’s hogtied its narrative choices, and as a result the season winds up more fizzle than not. That’s my theory, anyway. It offers hope. A drama is better positioned to spruce up dialogue than to make misused characters interesting again. A comedy has a better shot at straightening out story issues than it does at reviving dead wit. If F Is for Family can’t successfully make the sort of jokes it was created to make, then it risks entering Pet Sematary and becoming its own Guardians of the Galaxy Vol. 2. We can only wait and see.

In the meantime, the name Sy Jewison seems like a remarkable throwaway joke, given that Americans aren’t supposed to like anti-Semitism. Here’s another: “You could do voise,” says a hook-nosed commercial mascot for a local clothing store (another Jewish, or Jewy, name, but I forget what). The two jokes show F, season 3, over-swinging and being repellent instead of bracing. But they’re also the occasion of a social mystery. Google the names or “F Is for Family anti-Semitic” and nothing turns up. The show has now dropped to Sambo-level racial humor and no one says anything. This in a country primed to shout about every racial inflection transmitted by the mass media; this with a victim group that’s accustomed and well equipped to speaking up for itself. I don’t suggest some coy explanation, such as the woke secretly disfavoring Jews. The Anti-Defamation League doesn’t disfavor Jews and it hasn’t made a peep. On the other hand, the staff of F Is for Family may not even know that it made those jokes or what it meant by them. My guess is that today so many standards have been bent so many ways that no one registers anything; there’s just a sense of pieces all over the floor.