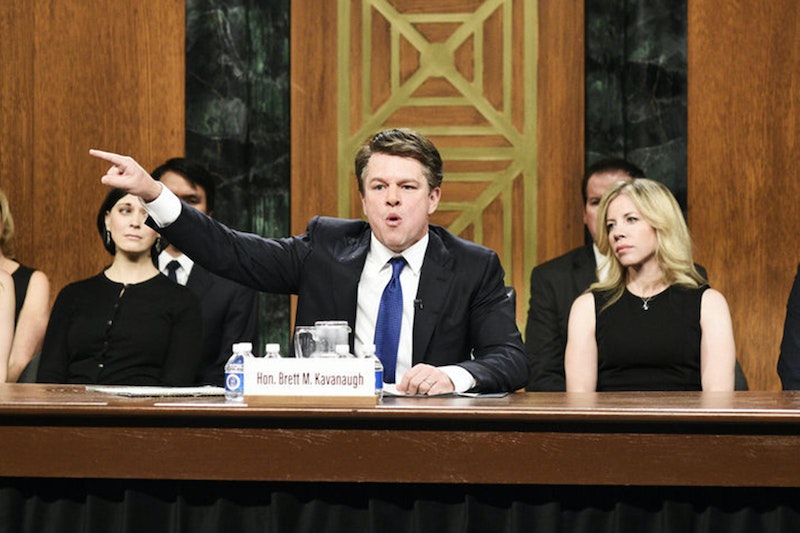 At the moment—and perhaps it’s passed—some are mad at Michel Houellebecq, author, provocateur, and, in the words of Red Scare’s Anna Khachiyan, a “French sex pervert” who has the January cover story in Harper’s: “Donald Trump Is a Good President.” I’m not interested in treading over its numerous landmines, but Houellebecq makes a point that can’t be repeated enough, especially in America: “Peoples’ memories aren’t very long.” Now, Houellebecq follows that up with, “The Hungarians, the Poles, the Czechs of today—do they really remember that they used to be communists? Does the way they envision what’s at stake in Europe differ so much from the Western European viewpoint? It seems extremely unlikely.”

To paraphrase Houellebecq from the same piece, I don’t know enough about any of those countries to say one way or another, but the fetid effluvia and sickening sweet-nothings sent George W. Bush’s way after he—shocker—cried at his father’s funeral. One tweet read, “We don’t deserve George W. Bush.” Obviously. No one does. Over a million innocent people died on his watch. But this idiot got all mushy watching a ghoulish funeral pageant that concluded a couple of weeks ago with an inexplicable train tour of the 41st president’s body from Washington, D.C. to Texas.

I suppose it’s not that surprising that a Daily Caller writer would get weak in the knees watching George W. Bush do anything in 2018 (whether it’s surreptitiously giving Michelle Obama pills—I refuse to believe that’s candy—or fumbling with his umbrella or something), but I was stunned to see the studio audience at Saturday Night Live last weekend break into uproarious, sustained applause during the cold open when Matt Damon as Brett Kavanaugh appeared.

Keeping with recent SNL tradition of abandoning jokes in favor of simply reciting the news or cribbing from Trump’s tweets, Alec Baldwin as Trump is led through a black and white alternate reality where he lost the 2016 election. All familiars are present: Kate McKinnon as Kellyanne Conway (“After we lost the campaign, the Devil did give me my soul back, sooo…”), Alex Moffat’s mentally disabled take on Eric Trump that has inexplicably drawn no ire (it’s no less broad or dumb than Simple Jack, a conscious satire), Beck Bennett as Mike Pence, a closet queen free to let his freak flag fly under a new Clinton administration, and Robert DeNiro as Robert Mueller, who was practically given a hero’s welcome.

But Kavanaugh—this one makes no sense to me. Damon appeared on the first SNL episode to air after the public hearings in late-September, and it was another cold open that contained virtually no original material, just a collection of moments and phrases copied verbatim from the hearings (“I like beer,” all of the idiotic nicknames for his drinking buddies, yelling at Amy Klobuchar). September 27, 2018 was a solemn, fucked-up day in America, far darker and sadder than Poppy Bush’s prolonged funeral rites.

It was disturbing enough watching Christine Blasey-Ford get dismissed once Kavanaugh took the stage sniffing and pouting ready for a fight. To have watched all eight hours of their combined testimonies was an act of masochism, and millions participated to varying extents. Many Americans sobbed, opened up to family members and friends about their own sexual trauma, and by the end, it was clear that the brain-dead fratriarchy would prevail.

It hasn’t even been three months and all of a sudden Kavanaugh is a cuddly caricature, a turnaround more disgusting and surprising than Sean Spicer’s ridiculous cameo at the Emmy’s in 2017. Yes, peoples’ memories aren’t very long, and perhaps none of this mattered to them that much in the first place. Maybe it was just something to get worked up about, that week’s programming. No one will remember Houellebecq’s piece in a month, proving his point. But I’m stunned that Kavanaugh, a man who briefly embodied rape culture and affluent white male privilege in America, would ever be greeted like that, no matter who’s playing him. Further evidence to trust no one, not even yourself—you might not recognize you in a couple months’ time.