Passion for a Red Planet

Examining a collection of Mars-focused books and magazines. 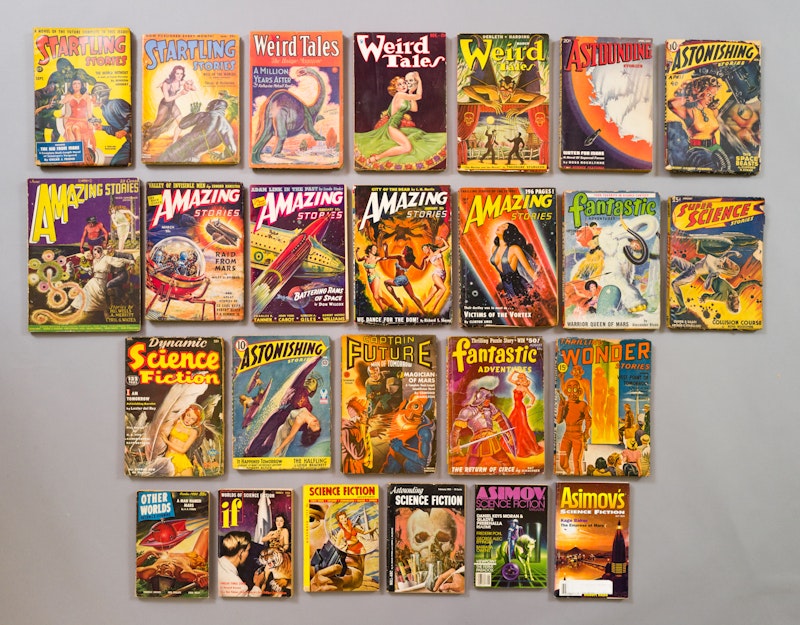 I’d come to the Manhattan Rare Book Company, across from Grand Central Station, to see “Mars and the Imagination,” a collection of over 900 Red Planet–related books, periodicals and other items, non-fiction and fiction, with scientific monographs of the early-19th century alongside pulp magazines and comic books of the mid-20th. It’s for sale as a set, with an asking price of $975,000. The collection’s “exhibit-ready”; a museum or other institution could put it on display or provide a reading room for researchers or the public. The collector behind the offering is retired businessman David Wenner, who’d also compiled a physics collection now housed at the American Institute of Physics’ Niels Bohr Library in Maryland.

After getting a publicity email about the Mars offering, I’d made an appointment to see the book firm’s owner, Michael di Ruggiero, who, along with associate Charles Tolkien-Gillett, presented highlights from the collection. My friend Mike Battaglia, longtime colleague from Space.com and Scientific American, joined to peruse the materials. We chatted about what types of people or entities might have interest and means to acquire such an assortment. Maybe the Lowell Observatory in Arizona or the Griffith in L.A.; perhaps exploration proponent Robert Zubrin or media personality Lou Dobbs. (I advised the dealer not to use my name if pitching Dobbs.) The ideal buyer, I suggested, is Elon Musk. One can imagine him holding a press conference surrounded by reams of red-boxed volumes, showing the world that Twitter embroilment won’t eliminate his priority and credibility for settling the Red Planet.

I opened a volume. Osservazioni Astronomiche e Fisiche, by G.V. Schiaparelli, from 1878. Astronomical and physical observations, particularly regarding the topography of Mars. There were also books by American astronomer Percival Lowell. A translation of Schiaparelli’s canali, or channels, as “canals,” helped spread Lowell’s view about, as one of his book titles put it, Mars as the Abode of Life. Such expectations took a hit in the 1960s when probes showed a desolate landscape, but the idea of Martian life had a cultural hold. When a probe revealed a B-shaped mark on a red rock, astronomer Carl Sagan recalled the Edgar Rice Burroughs books that inspired him as a child, in which Mars is known to its inhabitants as Barsoom.

The timeframe of humans reaching Mars was a topic of discussion at the Manhattan Rare Book office. Mike Battaglia thought that might happen around the early-2040s, after a U.S.-China race to the moon spurs advances in space technology. The obstacles are formidable—technical, political and cultural. The exuberance for exploration reflected in much of the Mars collection has been dampened in recent years, reflected in movies and other entertainments presenting humanity as a blight upon prospective celestial destinations. “From ‘Avatar’ to Elon Musk, exploration is out and culture war is in,” lamented a recent piece by Washington Post columnist Sonny Bunch. But culture wars can burn themselves out too. The era of pulp sci-fi magazines may’ve passed, but Mars becoming sexy again would be a healthy societal development.