The Nanny Watches Capitalism Drown Everyone

Especially children, and their mothers. 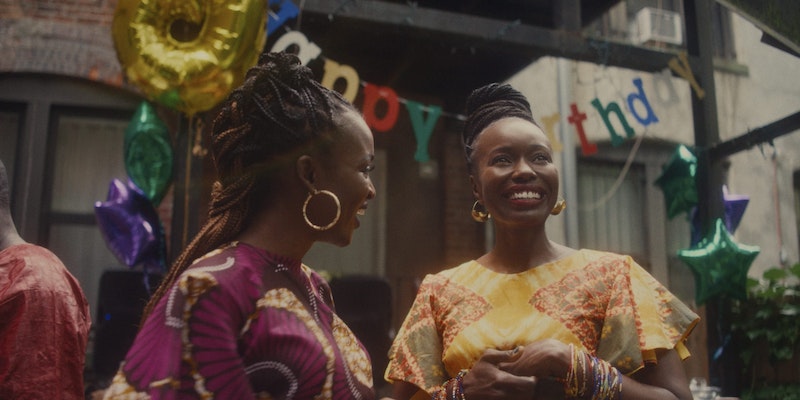 At first, director Nikyatu Jusu’s debut feature The Nanny seems like a story about personal exploitation. The evil in the movie, as in the pioneering Black horror film Get Out, appears to emanate from one particular, affluent, exploitative white family. But the tides of grief at the heart of this movie aren’t the doing of any one moon, and they draw on a sea that chokes innocent and guilty alike. Racism and exploitation soak everything, even a mother’s love.

The mother’s love in question belongs, most prominently, to Aisha, a Senegalese immigrant played with intensity by Anna Diop. Aisha was a teacher in Senegal, but after an affair with a wealthy married man, she became pregnant, ruining her career and prospects in the country. She came to America in hopes of making enough money to bring her now seven-year-old, Lamine (Jahleel Kamara) to the United States. In order to save more quickly, she takes a job as nanny for a wealthy Upper East Side couple, Amy (Michelle Monaghan) and Adam (Morgan Spector) caring for their daughter, Rose (Rose Decker).

The movie quickly and efficiently fillets the wealthy whites. Their colorless modernist apartment looks drab against the multi-colored wraps and dresses Aisha wears in her limited time off. And the white people’s awkward parties are in stark contrast to the easy openness and sensuality Aisha finds with the building’s doorman, Malik (Sinqua Walls). Diop’s acting and Jusu’s brilliant lighting and camerawork draw out Aisha’s beauty and warmth as she speaks to her son or falls in love with Malik. When she has to deal with Amy and Adam, her features are hard planes and angles.

The whites aren’t just boring and cold; they’re causally cruel. Adam is all easy, egalitarian friendliness until the moment he makes a gross pass at the nanny. Amy, meanwhile comes across initially as a model of efficiency, but closer acquaintance quickly exposes her fissures. She keeps trying to stiff Aisha out of payment, and she’s outsourced her childcare so completely that she barely knows what her daughter likes or cares about. In one ugly confrontation, she discovers Aisha has shared spicy Senegalese rice with her daughter. She’s angry because she thinks the food will make Rose sick—at which point Aisha points out there’s no other food in the fridge, and she’s been feeding the child from her own funds for weeks.

Aisha is contemptuous of Amy’s neglect of Rose. She reasonably refuses Amy’s lackluster appeals for feminist solidarity in the face of “the boys club.” But the movie’s also aware that Aisha’s situation isn’t that different from that of her employer. Both leave their children with others in a desperate effort to pursue scarce funds. Both demonstrate their love through absence. Which is why Aisha is so startled when Malik takes his child to work, and tells her, when she asks if it’s allowed, that he doesn’t care if it isn’t.

Amy and Adam take it for granted that Aisha will care for their daughter and don’t inquire too closely into their own. That makes them awful. She has few options and limited resources, but to the extent she can be said to have had a choice, she chose to leave Lamine behind. She’s haunted by guilt—and not just metaphorically. She begins to see images of her son. She has visions of the family’s apartment flooding and is pulled underwater in a swimming pool by the water spirit Mami Wata. Anansi the Spider, another spirit, crawls into her mouth when she’s sleeping. Rose also says she sees Anansi, and speaks to him—he delivers, at one point, a very uncomfortable message from Lamine.

Malik’s mother Kathleen (Leslie Uggams), who’s traveled extensively in West Africa, explains that the spirits aren’t necessarily trying to harm Aisha; they’re trying to prepare her for something. Kathleen says that she had to find a new path after the death of her schizophrenic daughter. That death was possibly hastened when Kathleen called the police because she was afraid her child would hurt her grandchild. The cops were brutal. Kathleen describes vividly, as if she’s still watching it, the way they threw her daughter down.

Kathleen says the system destroyed her daughter—a system which doesn’t care for mothers and children, and especially not for Black mothers and Black children. That system includes Amy and Adam, whose withholding of wages tragically puts off the moment when Aisha can send for her son. But the system also includes the man who abandoned Aisha and her (and his) child in Senegal. And the system includes Aisha herself. Via the brutal logic of shame, misogyny, racism, and capital, she’s the perfect mother to the wrong child.

The ending is both inevitable and ruthless. It also offers, though, a possibility of redemption and rebirth. Capitalism, hierarchy and racism make love unendurable. But love can also be a kind of resistance. The Nanny knows both that water drowns and that you can’t live without it.