Dated Humor in the Trump Era 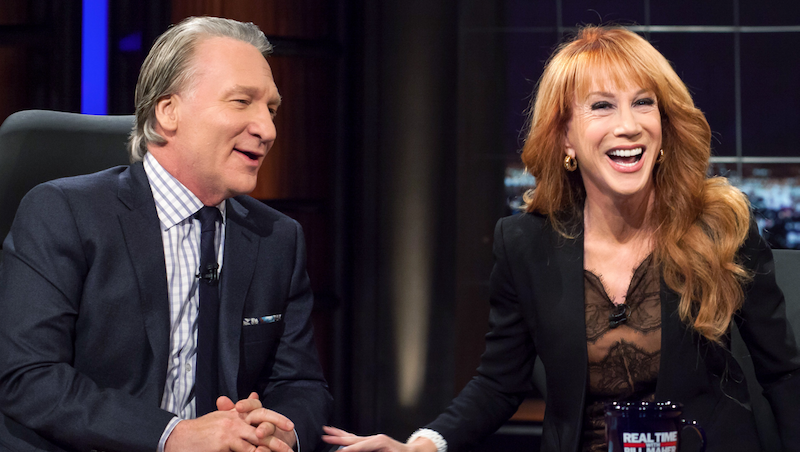 The Trump administration should be a golden age of comedy. Our president is an id-driven narcissist who courts dictators at the expense of our global partners in democracy. He’s exactly the sort of wannabe-aristocrat who should be inspiring a generation of comedic take-down artists. Unfortunately, our comics may end up impaling themselves on the swords of their own hubris.

Kathy Griffin recently worked with photographer Tyler Shields, producing a picture of her holding a bloodied mannequin head representing Trump. The controversy has led to Griffin losing her annual gig ringing in the New Year at CNN, in addition to canceled dates on her stand-up tour, and some endorsement deals. I’ve usually enjoyed Griffin’s act because she was adept at puncturing the pomposity of celebrity culture, and I believe her humor was tailor-made for the absurdity of reality television. I’m also at the point in my life where I find her routine about losing her mother’s dentures to be relatable. But as Trump made the curious evolution from reality television star to president, the stakes have changed.

To her credit, Griffin was quick with an apology, even if her detractors found it insufficient and insincere. Her next move, a press conference with attorney Lisa Bloom, was so ill-conceived it may have led to a feud with GWAR, among other metal artists. The photo has also inspired a Secret Service investigation. Trump’s own condemnation of Griffin, as well as those from his wife and his oldest son, should’ve been expected. People don’t usually like to see bloodied, headless effigies of their family members. Unfortunately, I’m not surprised at the death threats Griffin claims to be receiving. I think what really made it worse wasn’t just her assertion that she’s been targeted by the Trump family, but that the reason is rooted in sexism. The only thing that strikes me as sexist is that I’ve seen almost no criticism of Tyler Shields for his part in collaborating on the photo shoot. The overall effect was that, to me, she sounded like she was hiding behind feminism to downplay her dumb mistake.

In trying to establish proof of a double standard, many, including Griffin, have tried to make the case that Ted Nugent was rewarded for perceived threats against Democrats with a visit with Trump at the White House. While holding two machine guns during a concert, Nugent said in 2007, “Hey Obama, you might want to suck on one of these you punk! Obama, he’s a piece of shit… Hey Hillary, you might want to ride one of these into the sunset, you worthless bitch. How about Barbara Boxer? She might want to suck on my machine gun. Hey Dianne Feinstein, eat one of these you worthless whore. Freedom!” Speaking at a National Rifle Association event during the 2012 election, he said, “We need to ride onto that battlefield and chop their heads off in November.” Nugent also lost gigs and was the subject of a Secret Service investigation, and was found to not be actively threatening anyone. Nugent’s own response to Griffin’s charges was, “I did nothing to harm anyone. She came out with symbolism that was truly vile. This kind of conduct is absolutely reprehensible and unacceptable.” To which I can say that Nugent is no prize either, and in watching the video of him and his machine guns, he and Griffin are about even.

Griffin isn’t the only comedian suffering a self-inflicted wound. During a recent interview on his show, Bill Maher’s acerbic exchange with Sen. Ben Sasse led to the comic calling himself “a house nigger.” It’s kind of ironic he did something so immature, considering that the moment before, Maher was commending Sasse on the premise of the latter’s new book on raising children to be adults. There’s no defending Maher’s use of the term, and he should simply know better. But he’s too often congratulating himself on his cleverness. As my Splice Today colleague Chris Beck observed, “No way Maher was going to make that joke work, but if he hadn’t tried to be so edgy & went [with] ‘house Negro’ it would’ve been better for him.”

Maher has since issued an apology, Sasse has said that his own cringing was an insufficient response, and HBO said it will edit the slur from future reruns of the episode. Is any of that good enough? Chance the Rapper and Black Lives Matter activist DeRay Mckesson, among others, have called for HBO to fire Maher. A number of people are citing this incident as “proof” that Maher is a bigoted wolf in lefty sheep’s clothing. A quick survey of #FireBillMaher on Twitter took me through an interesting list of grievances leveled at him since the election, from both sides. Because HBO is a subscription service, there are no advertisers to boycott. Depending on the terms of Maher’s contract with them, HBO may be more likely to suspend than fire him. Perhaps the one consequence Maher is likely to face is losing live performance gigs like Griffin or Nugent.

Buzzfeed ran an essay describing Griffin’s comedy as dated, and suggested that she change with the times, citing Sarah Silverman and Amy Schumer as role models. There may be something to the argument that the presence of more women in comedy means that female performers have more of an opportunity to take a more individualized approach to comedy. I think the argument about dated humor can be applied to Maher as well.

In one of Maher’s better “New Rules” segments, he derides Trump as a “'50’s guy,” and the last of a dying breed. By the same turn, I think Maher is an '80s guy and Griffin is an '80s gal who still think having gay or black friends gives them magical hipness points, and a license to say anything about anyone without consequence. But we don’t live in that world anymore, and humor has evolved to focus on who’s taking the blows when a comic is punching down, and why.

Comedians and rock stars say and do things the rest of us can’t. They dance on the boundaries of propriety, but if the audience feels threatened, the end result is not just bad art, it’s a challenge to free expression. When people act to censor, it’s not only that they wish to control the message, but also they don’t trust the audience to make their own decisions.