Nerds With Other Nerds 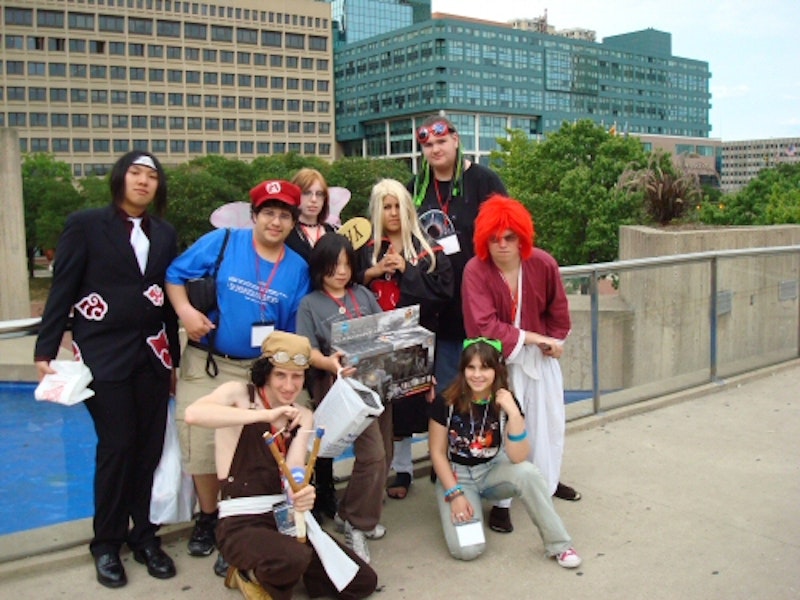 Otakon, the second largest anime convention in America, was held in Baltimore’s Inner Harbor last weekend for the 18th year in a row. For those three days, money streamed through downtown area restaurants, hotels, and shops. By now, businesses and natives are used to the Otaku crawling across the Convention Center and its surrounding attractions—it’s an annual occurrence—but tourists who just happened to choose the last days of July as a vacation weekend were in for a shock, as they always are. Otaku is Japanese slang to identify someone anime, manga, and/or videogame obsessed. Originally meant to be demeaning, the term has morphed into an endearing title among nerds and geeks. And that is exactly what they are, nerds and geeks. Like any Sci-Fi/comic book convention, these particular nerds and geeks have an affinity for playing dress-up. So, it’s no surprise that there were more than a few pedestrians frozen with their jaws on the ground, examining the pink haired, ridiculously dressed, sword-toting freaks who walked past. (In fact, it’d be more surprising if there weren’t a reaction at all; after all, Baltimore’s not New York, where no one raises an eyebrow even if a score of attention-seekers walk down Broadway naked.)

Most call them costumed-weirdos; Otaku call themselves Cosplayers. Dressing up as their favorite characters in outfits that are not only impractical, but also implausible, Cosplayers generally make their own duds and accessories, which requires some skill. Say what you will about nerds, but as a whole they’re pretty persistent. Once they get hooked on something, like anime for instance, they’ll go all out. The intricate designs and small details that go into some of these extravagant costumes are ridiculous. So ridiculous that they have people wondering what’s more crazy, the fact that someone took the time to make a mind-numbingly thorough outfit that looks oddly like a mix between a samurai and a Martian, the costume itself, or the fact that the person is currently wearing it out in public.

But aside from the costumes, Otakon is mainly about nerds getting together to see other nerds. With 23,000 people just like them attending the convention, no one has to worry about being made fun of or ridiculed for their hobbies and obsessions. Otaku may claim that the convention is mainly about stocking up on merchandise, but really, who pays a $75 ticket fee to buy overpriced DVD’s in a crowded, smelly warehouse? “Well, to me, it’s about the celebrities and guests.” No, it’s not. Again, who wants the autograph of a Japanese voice actor who had a bit role in a show that got mixed reviews? Oh, and he doesn’t speak English. And no photographs are allowed. In America, anime nerds are more frowned upon than comic book geeks, indie hipsters, and homeless people, so when an opportunity to gather around a two-mile radius and dress up, blurt out outdated Internet memes, and eat at an unhealthy pace, they jump in it.