The Joker Has Copyrighted Everything

We're living in the Joker's world. 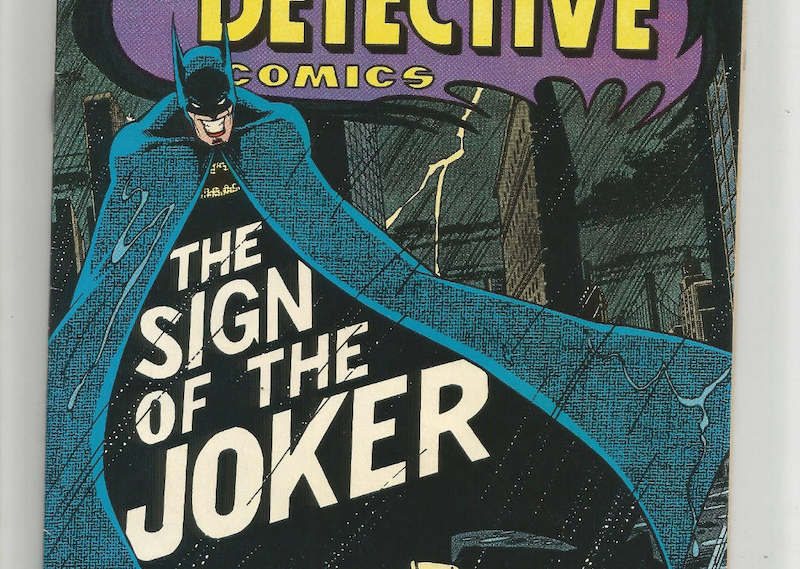 This is part of a series of posts rereading comics from my childhood. The last one on DC Comics Present: Superman and Bizarro is here.

"The Sign of the Joker" from 1978 is one of the oldest comics I own in its original floppy form; I must’ve bought it when I was seven or so. It's also, somewhat to my surprise, a rather famous story. The two-parter of which it’s the second half has been included in The Greatest Joker Stories Ever Told. It also became the basis for a well-received episode of Batman: The Animated Series.

The issue's critical acclaim is difficult to credit when you re-read the actual book. Artist Marshall Rogers draws a moody Batman, and his rain-soaked Gotham, shot at odd angles, has a noir feel—a battle on a metal fire escape, with the slatted stairs double as symbolic prison bars, is especially fine.

Steve Englehart's central story is okay, with some flashes of better-than-okay. The Joker has poisoned the water, giving all the fish a Joker grin. Since the fish look like him, he's demanded a percentage of all fish sales in the country, and has promised to kill members of the copyright commission if his request is denied. In the previous issue, he'd already killed one; at the beginning of this episode, he murders another, by getting the poor man's cat to eat a Joker fish, and then bite its master. Batman eventually foils the Joker's next murder by means of a detector device left by the ghost of some guy named Hugo Strange, who we never learn much about. Then Batman and the Joker fight on that scaffolding; the Joker falls into the river and disappears. Bruce Wayne's lover, Silver St. Cloud, who has figured out he's the Batman, shows up to break up with him, and that's the end.

The central Joker/Batman plot works well enough. But I'd remembered the comic as confusing when I was eight, and now that I'm in my 40s, it's still unfocused. Again, the Hugo Strange plotline is never clearly explained, and Silver St. Cloud comes across as a blank. There's nothing about her that's memorable or interesting, and her tearful speech about how she can't take the danger ("I love you… but I couldn't live with that! Never knowing what each night would bring!") feels like it could’ve been cut and pasted from any other super-girlfriend over the last three decades. She's a generic dame.

The most interesting thing about the comic is the way that it half-acknowledges that genericism. The fact that Batman catches the Joker with a transparent gimmick from a (transparent) ghost is a tip-off; Englehart is reaching down to tweak the plot and make sure it hits all the Joker beats of outlandish crime/multiple murders/Bat battle/Joker disappears. Hugo Stranger—whoever he is— functions as a deus ex writer. He's Englehart's avatar, who ties the loose plot ends together with flamboyant illogic (Strange also scares some crime boss into confessing that he's been ruining Batman's good name.)

The almost deliberately half-assed narrative dovetails with the Joker's own incoherent plot. The Joker demands money for copyrighting something he didn't create, just because he ruined it. It's hard to imagine that a work-for-hire writer at DC wouldn't have the company's own relationship to intellectual property somewhere in mind while writing about such ludicrous copyright claims. Joker, really, just wants to be as successful as the company whose book he's landed in; he wants to replicate garbage and get paid for it. In the comics' most entertaining sequence, the Joker makes the connection between his own dreams and standardized corporate product when he begins to worry that people will stop eating fish. If everyone boycotts his Joker seafood, what can he do? Joker is momentarily sad, but then he decides he can just feed his formula to cows, creating…"Joker-burgers!" Supervillains and superheroes are the McDonald's of comics; a Joker story is fast-food adventure fiction.

In 1978, superheroes hadn't yet conquered the cineplexes. In retrospect, Englehart and the Joker seem prescient. A couple of decades down the road, and suddenly that Joker grin is on every movie fishface. The same smiley plot shows up everywhere; the good guy wins, the bad guy loses, the romance plot is off there to the side. All our weather now is Joker weather. It's damp and it kind of stinks.