John Barrowman? No Thanks

He still hasn't apologized for his transphobic remarks. 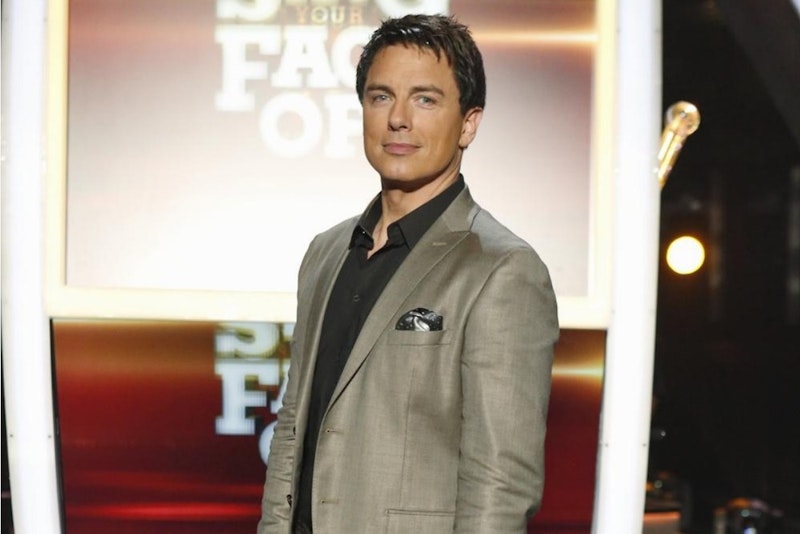 I’d like to opt out of experiencing John Barrowman, please. Where can I sign up for that?

As the dashing, bisexual Captain Jack Harkness of Doctor Who and Torchwood fame, Barrowman holds a certain status in Nerd Culture these days which I’m not sure he’ll ever lose. In real life, he’s a Scot by birth, has a charming cleft chin, and is as gay as the day is long. Currently, he plays the scheming Malcolm Merlyn on The CW’s Arrow, part of the DC TV Universe (which is separate from their cinematic universe because of… reasons). He’s beloved by millions of geeks around the globe who adore his quick wit and charitable work.

Also, John Barrowman is kind of an asshole.

Given all of the above, I’m not surprised that when I say things like that, my nerd-inclined friends tend to clam up and stop responding to my messages. I’m being annoying (and I know it) by not shutting up about something Barrowman did in 2014, and the way he defended it a year later.

See, Barrowman—being a social media-savvy fellow—posted a video online of himself and an Arrow costar in their hair and makeup trailer. The purpose was to show a little behind-the-scenes footage to keep up engagement with fans. No harm there—until Barrowman began talking: “This is what trannies do.”

Older cis gay white men like Barrowman have a nasty habit of throwing around “tranny” like it’s going out of style—which is actually appropriate, because it is. Although the word has roots among trans-identified drag performers, contemporary trans activists are trying to discourage use of the word especially outside of the trans community, where it’s used as fuel for the hate crimes that kill more of us every year.

Meanwhile, “non-threatening” cis gays like Barrowman think it’s okay to use it as a term of endearment for their cishet friends, which is so inappropriate I barely know how to process it. Apparently there’s no cognitive dissonance for Barrowman, though, who told an adoring crowd in 2015 that he “meant no malice” because people on the set regularly called each other “tranny-tacular” in a fun, nice way, and that trans people who were upset should “lighten up.”

That has been his last word on the subject to date; I imagine his publicist expressly forbids him from bringing it up again, because what the actual hell John Barrowman. (See why I get pissed off when nerds fawn all over him for dressing in Squirrel Girl drag at Comic-Con?)

Listen: if a trans person tells you that something—a word, a phrase, an implied idea—hurts them in some way, it’s incumbent on you not to continue using those rhetorical devices simply because that’s what you’re used to or you don’t understand why they feel that way. Feelings aren’t rational; if they were, there would be a lot less people who were born into bodies that cause them physical and emotional distress on a spiritual level. If you want to respect trans identities, that means respecting our feelings as well, and the language you use to address us is part of that.

If you don’t want to respect trans identities because it’s inconvenient or you think we just can’t take a joke, on the other hand, I suggest you cue up some Torchwood and wait for the world to pass you by. I hear “Fragments” is a good one. I wouldn’t know, because as I said, I’m opting out of the John Barrowman Experience.