The Savage Conundrum, Part 1: On the dilemma of Savage Dragon fandom. 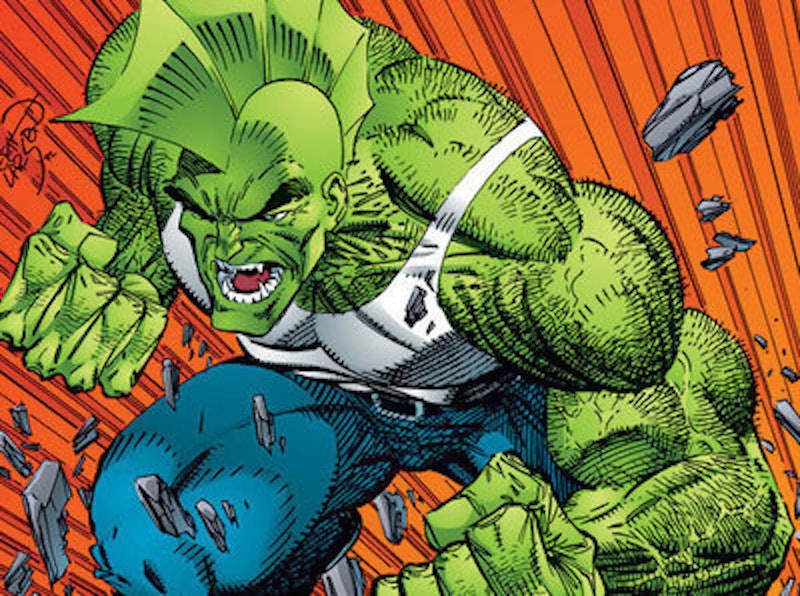 Savage Dragon is about an amnesiac alien who materializes in a burning field in Chicago, becomes a police officer, and has tons of crazy adventures; eventually his son takes over for him.” My proposed elevator pitch for this series, an admittedly lame summary that does no justice to how strange, cosmic, complicated, and wonderful it actually is and underlines the idiocy of having to reduce everything to elevator pitches.

Everyone wants to get in on the ground floor. While this is true for just about anything you can think of—fads, IPOs, rock mythologies, sports careers—it’s especially true in the world of superhero comic books. Regardless of quality or rationale, first issues have a definite sexiness about them: the hot art, the new direction, the air of possibility, and the sheer investment potential. Perpetually a-swim with stark poses, work-shopped logos, and lysergic color blends, comic book shop walls sing sirens’ songs to fans; in 2016, wages wave white flags at inflation from a great distance, this hobby is more expensive than ever, and on some primal level, #1s leapfrog the chorus din.

The curious non-fan, meanwhile, seeks the easiest and least costly path to entry; they want to leap aboard at #1 or #5, not #426. The flailing corporations who own DC and Marvel understand this, which is why their readers are buried in mini-series, rebooted universes, parallel timelines, paradigm-grazing or -shattering crossovers, assorted continuity shrapnel from movie-studio warfare, incessant #1s. Attention spans have diminished; revenue sources aren’t guaranteed; pharmacy spinner racks are distant memories of a simpler time; characters are valued, primarily, as properties. When it comes to parting with disposable income, consumers have myriad options.

From official solicitation copy—a comics publisher in-advance description of a forthcoming issue—we can tease perspective, if not glean true meaning. Between the solicitation for Savage Dragon #140, from 2009, and the one for Savage Dragon #219, coming this December, a shift in tone is palpable. The copy is pithier and to-the-point, less effusive and less enthusiastic—as though whoever is tasked with writing it either settled into a less-is-more crisis or slowly tumbled into an existential funk.

In both cases, “First” is written as “1st” in a large, dynamic characters; you couldn’t miss it if you tried.

Most fans of obscure cultural phenomena can recall a miraculous moment where we realize we aren’t completely alone in adoration: holy heck, someone else loves that novel, that movie, that band, that Dadaist artist. It’s an empowering feeling. You recognize yourself as a member of a no-dues-demanded cult, and—best-case scenario—your cohort expands, and ultimately that acute sense of aloneness is replaced by one of belonging. The best comic book stores encourage that, and in so doing (hopefully) seed whatever future this industry is destined to enjoy.

The Savage Fincast, a podcast dedicated to all things Savage Dragon, enthusiastically sifts through and ponders the series’ minutiae. For readers, listening in can feel a lot like hanging out in a Chernobyl bus shelter with the handful of other people who still care about this book. When Dragon creator/penciller/writer Erik Larsen joins the podcast hosts for the occasional interview, the proceedings take on the rueful cast of his social media platforms, and everyone’s forced to reckon with the reality that this mythology we so treasure is slowly starving to death.

At Image Comics, retail price is a reflection of sales. An issue of Savage Dragon will set you back $3.99—making it among the company’s most expensive books. For comparison, smash hit Saga has held steady at $2.99 per issue since its 2013 debut; ditto for Invincible, which launched in 2004. Over the decades, the cost of Spawn crept up to $2.99 in March 2010—but it held the line there. This is significant because while Spawn and Dragon are the two only Image series that have persevered since the line debuted in 1993, they are the two Image series that comic stores seem unwilling to stock. Whenever I visit a new store, I ask the proprietor about this, and the answer is inevitably something like “There’s no interest, and they’re just not that good.” Note that Spawn has gone through an embarrassing number of writers and artists, while Larsen was scripted and illustrated Dragon from jump, though letterers and colorists have changed over the years.

Larsen—an outspoken comics obsessive whose Facebook presence is almost professorial on his vocation’s finer points—has indicated that only a fraction of those following him on Twitter actually buy the title; he’s also referring to his popularity as a creator as “fading.” In the Dragon letters pages, on Facebook, and in interviews, he encourages readers who cherish the book to tell our friends if we want it to survive.

So where does this leave the reader?

Well, the reader is left in a bind. The easiest way to turn friends onto something is to buy it for them, but buying Savage Dragon becomes extra expensive, because most comic stores can’t be bothered; you’ve got to order it online and pay extra for shipping. The brilliance of Savage Dragon, historically, has rested within intricate webs of plot and complex continuity. But, at present—maybe as a sop to neophyte readers—Dragon can be maddeningly linear. The tangled backstory, meanwhile, might be too messily discursive to recount when trying to woo friends into the fold.

A spittle-flecked rant about, say, the revelations and events of issues #207 and #208 will sound bonkers to the uninitiated. Expect your friends, or other comic shop patrons, to quickly change the subject.

It’s a lonely place to be.

If you’re me, you keep an ear to the ground for Larsen news (his guest run on Spawn is ending and a new one on Ant is imminent), keep my subscription up to date, and write articles like the one you’re reading right now.

So how did we get here? Why did tens of thousands of readers wander away? Why is Savage Dragon the only ongoing series that I care about, even if I don’t yet own every issue, and how does it salute and subvert the tropes of its medium? Why is Larsen a creator worth paying attention to, particularly for astute students of comics history? What does Dragon have in common with the larger action movie genre? How do Larsen’s obsessions and fascinations fuel the adventures of a finned, green-skinned character he created back when he was 14 years old?

Watch this space for the answers to these and other questions.