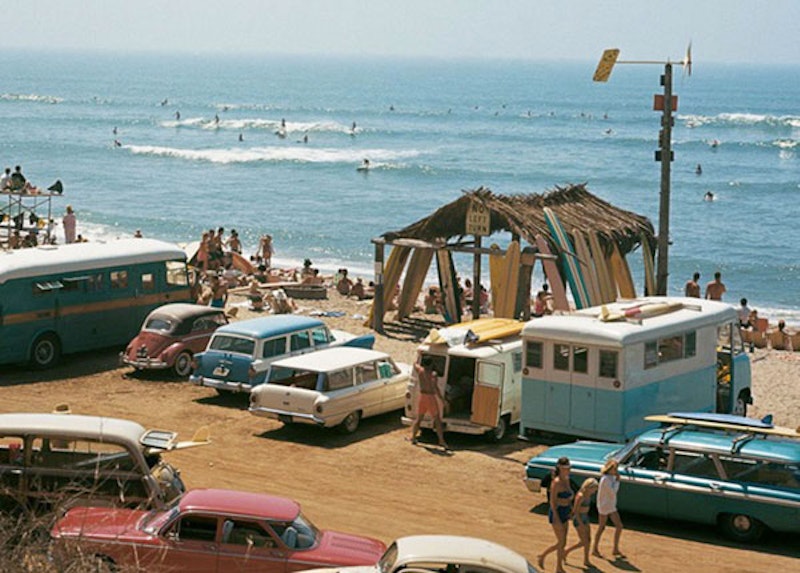 I love the fact that there are no decent video games about surfing. Chris Cote, editor of the defunct magazine Transworld Surf, recently said the problem might be difficulty in digitally rendering water. “I know one thing that's really hard to animate is moving water,” Cote told reporter Morgan Williamson. “That in itself’s a massive hurdle, it’s a pain in the ass. A lot of people don’t want to do it.”

In a world gone obsessively digital, surfing, like passionate sex, is a bold holdout that resists the reductive iPadding of everything. That’s one of the reasons the massive new volume Surfing: 1778-2015 is so special. This is a titanic book that weighs in at 15 pounds and comes in its own suitcase. Whatever version you see of it online, it can’t compare to holding the real thing. It’s heavier than most surfboards and rings up at $200. It can’t be viewed on a Kindle.

Surfing is the work of Jim Heimann, a genius archivist of American popular culture and executive editor at the book publisher Taschen. The book is gorgeously arranged with productions of posters, artwork, photographs and foldouts tracing the origins of surfing—it may have started in Hawaii as far back as 1200 A.D.—to the modern sport of 20 million fans. There are also wonderful shots of surfing fashion, from floral bikinis in the 1950s to the to the high-tech wet suits of the 21st century.

Surfing is comprised of five chronological chapters, each covering a different time period and each written by a different historian. The best section is the first, “The Emergence of a Sport: 1778-1945,” written by surfing encyclopedia Matt Warshaw. Warshaw has an enthusiastic and learned style of writing that’s both fun and interesting. He unearths a quote from 1777” “I could not help concluding that this man felt the most supreme pleasure while he was driven on so fast and so smoothly by the sea,” surgeon William Anderson observed in 1777. It’s a hard description to top.

The rest of the chapters trace “the sport of kings” from after World War II to the 1980s boom in surfing and onto the present day, in which an estimated 20 million people partake in what Heimann calls “the act of being on concert with mother ocean.” The writers in Surfing are all excellent, covering how technology (plastics after World War II), rock ‘n’ roll, and the increasing ease of travel helped popularize the sport. There’s also an introduction by Heimann in which he recalls egging the Beach Boys at an early 1960s concert in California because the musicians were crosstown rivals and Dennis Wilson was showing off with a new “vette.”

Still, the real glory here is the breathtaking graphics. In the intro to Surfing: 1778-2015’s, Heimann writes, “To attempt to encapsulate this history in a single volume is an impossible task… A book, an article, or blog can only give a glimpse of what the world of surfing is all about.” He’s wrong about that. Surfing 1778-2015 might not be the entire story, but it offers far more than just a glimpse.

To get a sense of the scale of Surfing, here’s a video I made of the book: