Jenny On the Road 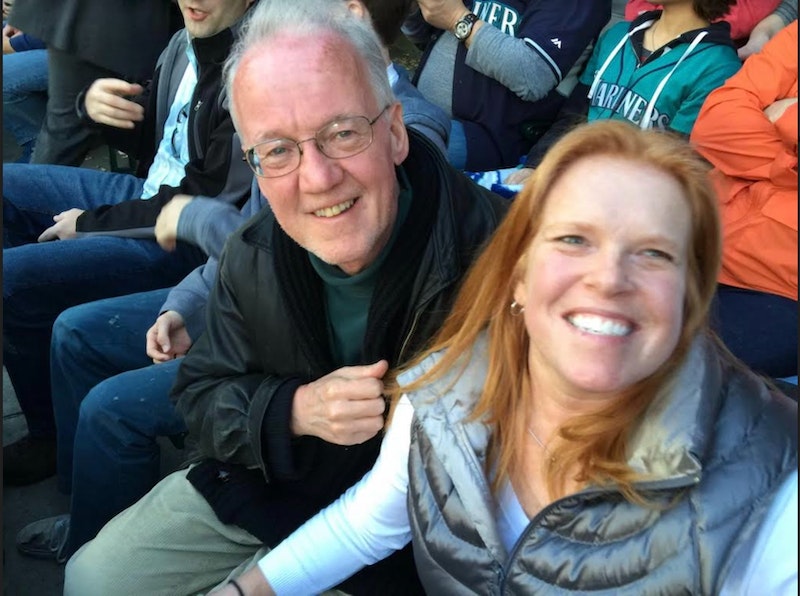 As a fellow of manners, I won’t reveal the age of my niece Jenny (pictured below with me at a Red Sox-Mariners game at Safeco Field—now T-Mobile Park—in Seattle) but will let on that I was just shy of 14 when she was born to my late brother Jeff and sister-in-law Mary many years ago. None of my friends at the time—this was at Simpson Jr. High in Huntington, eighth grade, when two budding entrepreneurs of my acquaintance tried to sell tickets for prime position at after-school fisticuffs in the adjacent park; Danny Mankin vs. Jimmy Zimmerman drew the biggest crowd, and since I liked them both, it was ticklish to watch both emerge bloody, shirts and pants torn—had yet added the honorific of “Uncle” before their name, so it was a touch unusual and I dug the distinction.

I have a dilly of a photo tacked to a bulletin board in my home office of Jenny—now long-married and the mother of two splendid college students—mugging for my cheapo camera, gripping a can of Schmidt’s beer with both hands, with the impish grin of a two-year-old, as her dad and grandfather laugh in the background (grounds for arrest in some American precincts today) and sometimes that’s the image that springs to mind when I think of her. No apologies for the way my mind—and most people’s—works but of course there’s so much more brain data about my niece, who, bias notwithstanding, is one of the most generous and kind people I’ve ever known. (She’d protest at that description, but tough luck, Jen, I paid for this keyboard and that’s that!)

During a family trip to Mexico City in 1985—the lot of us stayed at the fancy Camino Real, which was leveled in an earthquake five months later—Jenny and my nephew Caleb had a furtive conversation with me while everyone else was swimming, talking about occasionally smoking pot, a snippet of their teenage lifestyles that initially took me aback (dutiful uncle) but was sociological fodder that could’ve been the first time I thought about the Smith offspring growing up. I listened with interest, sworn to secrecy, and gave few details of my own experiences with recreational substances.

After a long dinner at the now-defunct Canton restaurant in Chinatown, Jeff, Jenny and I went to Shea Stadium in October of 1989 to see the Rolling Stones on their Steel Wheels tour—a first for both of them—and if the band was going through the motions it was nevertheless memorable: really, it doesn’t get much better than being outside on a seasonable night, gabbing and cracking up with relatives with the Stones providing background music. There were other trips with all of us, notably a yacht excursion in Southern Italy, countless dinners in Manhattan and the 2001 Napa Valley weekend when she and Rick were married.

Some years ago my sons and I went on a brief baseball road trip, and as noted above, we saw the Red Sox beat the Mariners, and, more significantly got to spend time with Jenny. We also saw two Sox-A’s games in Oakland on that excursion, and then met up with Jen’s mother Mary (and her sister Barbara) in Santa Barbara. I’ve written about the mishaps the boys and I encountered—postponed flights in San Francisco, a long drive south in a futile rush to see Jen’s sister Zoe and her family—but won’t link because that’d give away the year.

Give it a go! Clues: Australia wins the Cricket World Cup; World Health Organization (WHO) declares that rubella has been eradicated from the Americas; Greece is the first advanced economy to miss a payment to the International Monetary Fund; Ottessa Moshfegh publishes her second novel; Paris suffers one of the worst terrorist attacks in its history; Sleater Kinney return with their first album in a decade; Minnie Minoso and Ben E. King die; Marlon James wins the Man Booker Prize; Stone Temple Pilots singer Scott Weiland dies; David Lynch begins production on Twin Peaks: The Return; Julianne Moore wins Best Actress Oscar; and Furious 7 is the fastest film to reach $1 billion in worldwide ticket sales.