How Inappropriate is the Mummers Parade?

Taking a look at the Philadelphia New Year’s Day tradition. 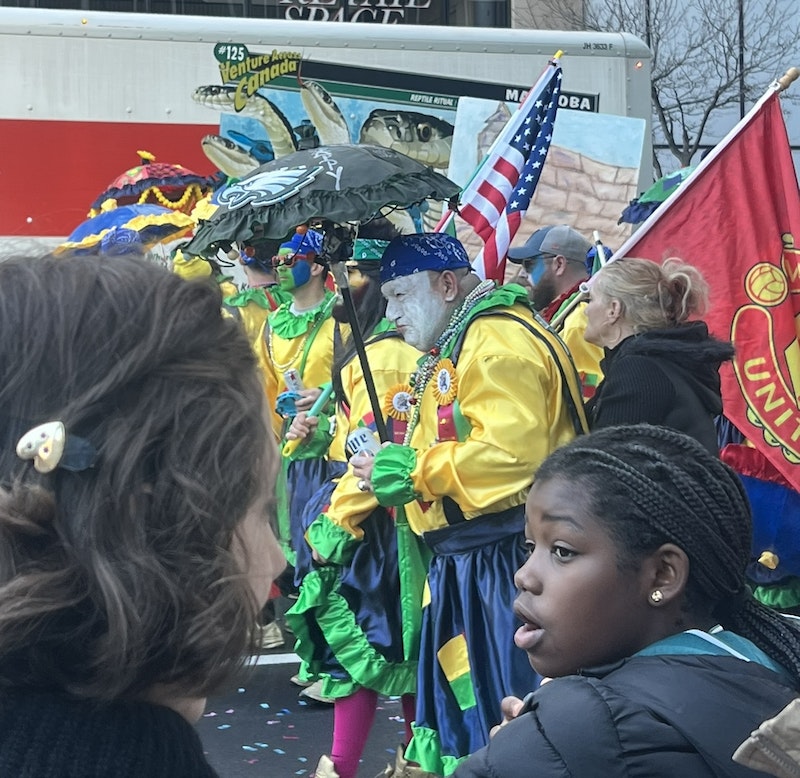 This week I went to a parade that I’ve wanted to attend my whole life as a kid who grew up in the suburbs of Philadelphia. The Mummers Day parade, widely known to us as kids as the Philly version of the Macy’s Thanksgiving Day Parade, was something I’d only seen on TV.

My brother traveled from Arkansas and invited me to have New Year’s Eve dinner in the city, and on learning that the hotel we were staying in was going to be locked into a street closure the next morning, I told him I was thrilled to accidentally be forced to attend the parade. He responded, “Oh, I don’t want to see that racist, homophobic shit.” Wait, what? I had no idea.

My 19-year-old daughter was in the car as we drove toward Philadelphia, and looked up the history. The Mummers Parade is the oldest continuous folk parade in the United States, consisting of elaborate costumes, moving scenery and performances including marching or pep bands that often play on moving vehicles. Preparations for the parade take months to complete and are organized by local clubs or “brigades.”

The parade traces back to the mid-17th-century, blending elements from Swedish Finnish, Irish, English, German, and African heritage. It’s related to the Mummers Play tradition from Britain and Ireland. The Mummers derive their name from the Mummers' plays performed in Philadelphia in the 18th century as part of a variety of working-class street celebrations around Christmas. By the early-19th century, these coalesced with earlier Swedish customs, including the Christmas neighbor visits and shooting firearms on New Year's Day as well as the Pennsylvania German custom of "belsnickling," where adults in disguise questioned children about their behavior during the previous year.

President George Washington carried on the official custom of New Year's Day calls during the seven years he resided in Philadelphia. The Mummers continued their traditions of comic verse in exchange for cakes and ale. Small groups of up to 20 Mummers, their faces blackened, went door to door, shooting and shouting, and adapting the English Mummer's play by replacing the character of "King George" with that of "General Washington."

The parade history is so littered with controversy that there’s simply a “Controversy” section on the Wikipedia page: “The parade has been accused of including hate speech, racist, sexist, anti-LGBT, and culturally insensitive costumes, makeup, and images.” Wearing blackface in the parade goes back to the 19th century, and continued into the 20th and 21st centuries, including mockery of Black Lives Matter as recently as 2020, when two Mummers were banned from future parades for wearing blackface. In response, mayor Jim Kenney said the city would end the parade "if Mummers leadership does not make immediate changes to better control the parade." City Councilwoman Cindy Bass introduced a bill that Mummers who wore blackface risk a $75 fine and a five-year banishment. A pretty light punishment.

The parade consists mainly of men dressed in drag as women who are not drag queens, so there’s a danger of homophobic accusations. In 2016, one brigade presented a Caitlyn Jenner skit showing her pre-transition on the cover of a Wheaties box and after transitioning on the cover of a Froot Loops box. A male Mummer, dressed as Jenner, appeared, mocking her Vanity Fair cover announcing she was transgender. News reports showed a Mummer with the Wheaties/Froot Loops sign screaming "Fuck the gays!" Social media posts led to two of the Mummers being fired from their jobs and ousted from the club.

So that’s the history I read leading up to attending the parade. That sure put a damper on my excitement to finally see it, but I vowed to go in with objective eyes and see if there were signs of racism or homophobia in this year’s parade.

I appreciated the parade for its artistry and pageantry: I can’t imagine who makes these hundreds of costumes, who does all this makeup, who spray paints all the thousands of sneakers gold. Many of these clubs are closely-knit groups—families, fire halls, veterans, and others. I saw many men and women pushing strollers, carrying babies who were all also dressed to the nines. I saw lots of people having fun. I had fun too. I loved the music, the sunlight reflection of the confetti as it was shot into the air in front of city hall.

I noticed there wasn’t a single Black individual participating in any of the brigades (with the exception of possibly a few musicians in a few bands), yet the streets were filled with Black spectators. I noticed political Christopher Columbus signs, a “Let’s Go Brandon” sign, and although thankfully I didn’t see blackface, the cartoonish painted faces and drag seemed outdated and non-humorous to me on the bearded "manly" men who wore them. I’m not sure how best to describe that other than, when I see a man dressed as a woman, I want it to be a drag queen, and these obviously aren’t drag queens. It feels like a sense of mockery. There’s still a “wenches” judging division in the contest where these men compete; women were only allowed to participate in the parade as of 1970.

The costumes, though beautifully handmade, are nothing like what I remember seeing on TV in the 1970s and 80s. Experiencing the racial divide makes it difficult to enjoy. I’m glad I got to see it once, but it’s not something for which I’d return to the city.