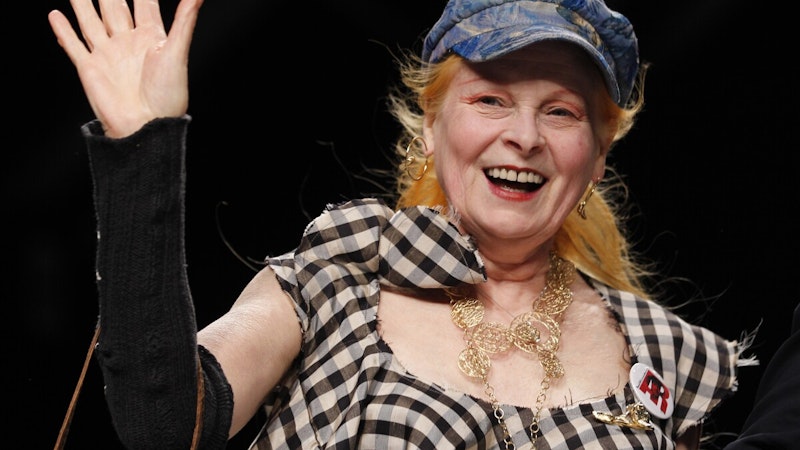 Vivienne Westwood: Your fall was better than an animal that's just been killed, because although it was physically natural, it was also artificial.

Noel Gallagher: I’m glad you said that. But even if I wanted to, how would I go about writing an opera?

Westwood: You need ideas. I've always said that a good idea is a perfect surprise.

Gallagher: That’s what I keep getting told, anyway. I don’t buy it. I do own a pair of Elvis’ headphones.

Westwood: He comes from an age that was very convenient for painters, all that mythology was part of a way of communicating in those days.

Gallagher: It’s the sound of an airplane landing, which we recorded on the airstrip outside the house I was renting. It’s too slow or too fast. [Thumps his heart with a clenched fist.] Nobody knows what really happened.

Westwood: What it amounts to is a chilling indictment of the lengths that business will go to, to make a profit.

Gallagher: Then the prime minister invites you round for a glass of wine.

Westwood: It is useful. You can practically do whatever you want by the time you get to that stage.

Gallagher: Your voice and your body change. If you’re not having a laugh, then don’t do it.

Westwood: But imagine if you were a rich person that was traveling along mud roads, in danger of being molested by highwaymen, on your way to see her.

Gallagher: Yeah. Why not? And then we go down to the pub.

Westwood: What it did for me was that it gave me a way to work where I wasn't under pressure, where I could develop my ideas and technique.

Gallagher: Everything was going to be bigger and better.

Westwood: It's always gone beyond that.