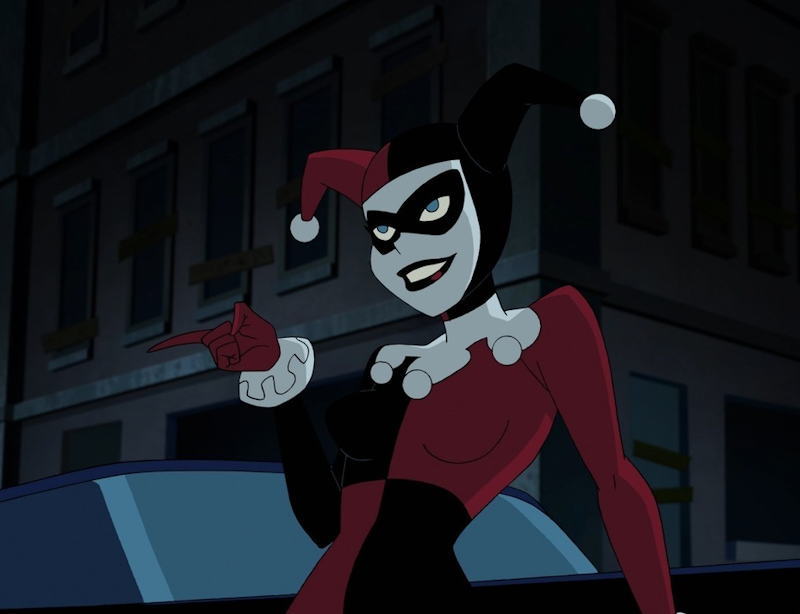 Is there a more ridiculous comics character than Harley Quinn? The madcap former psychiatrist and sidekick to the Joker has no super powers, an annoying New Jersey accent, and dresses like a court jester. She’s the Jar-Jar Binks of comics.

Comics, sci-fi, and fantasy are genres that are especially generous when it comes to suspending disbelief. But I can’t accept that a 98-pound hottie with a baseball bat and short-shorts can face off with Darkseid. Why do fanboys put up with this nonsense? What can’t DC just do the right thing and send her into deep place, heading for a Krypton-Style planet that’s about to go kablooey?

Harley is the annoying center of attention in Batman and Harley Quinn, a poorly conceived and morally obtuse new animated film from D.C. Comics.

Batman and Harley Quinn starts with a good premise. Frustrated with increasing environmental devastation at the hands of humans, eco-terrorist Poison Ivy (Paget Brewster) and man-plant hybrid the Floronic Man (Kevin Michael Richardson) team up to transform all animal life, human and otherwise, into plants. To accomplish this they use the research that Louisiana scientist Alec Holland conducted—that is, before Holland became the beastly green monster known as the Swamp Thing.

Holland’s work is stored in a high security lab in Gotham City, and when Ivy and the Floronic Man attempt a hack to get the formula, Batman (Kevin Conroy) and Nightwing (Loren Lester) try to stop them. The criminals get away, and Batman and Nightwing suspect that Poison Ivy is behind the plot. The two heroes turn to Harley Quinn (Melissa Rauch), a friend of Ivy’s, for help tracking down Ivy and the Floronic Man.

If developed properly, Batman and Harley Quinn could’ve been an interesting meditation on the importance of an environmentalism that does not degenerate into fanaticism and Earth worship. But the film is overcome by awkward and offensive situations and jokes, as well as uninspired punch-outs. After besting Nightwing in a fight—again, something fairly inconceivable, considering Nightwing was trained by Batman and Harley is a ditzy female—Harley ties him up and then sexually seduces him (Nightwing has gone toe-to-toe with the Joker but is helpless against duct tape?).

It’s not the end of the bad taste. On a ride to Louisiana to stop Poison Ivy and the Floronic Man, who’ve gone there to drop a toxin into the water of the Gulf Stream and spread it to humanity, Harley starts farting. A lot. If that slide into Adam Sandlerville isn’t bad enough, there’s also a scene that includes Two-Face’s twin henchmen assuming an unmistakable sexual position.

Legendary Batman writer and producer Bruce Timm, his co-writer Jim Krieg, and director Sam Liu have all done much better work. But the main problem is that they’re dealing with a character with an adenoidal whine who contributes nothing to the DC universe and ultimately makes no sense. The fact that DC had the balls to kill Superman but leaves Harley joking as she cuts though platoons of parademons is an embarrassment.