His relationship with Sally Hemings was deeply human. Supposedly. 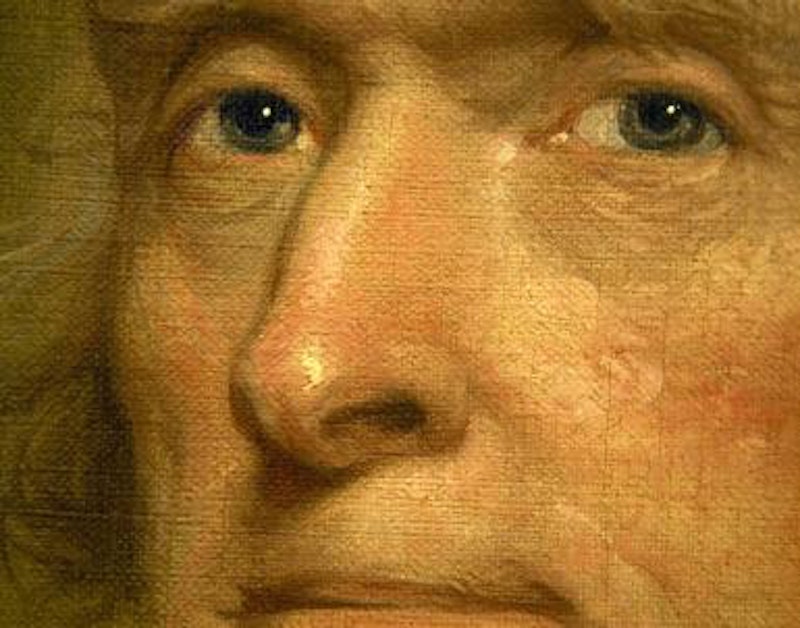 "I have often fantasized about meeting the author of the Declaration of Independence," Jean Zimmerman writes at NPR. It's an odd comment given the context; Zimmerman is reviewing Stephen O'Connor's new novel Thomas Jefferson Dreams of Sally Hemings. Hemings was Jefferson's slave; he began sleeping with her when she was somewhere between 14 and 16 and he was in his 40s.

To fantasize about Jefferson, then, is not just to fantasize about the egalitarian Founding Father. It's to fantasize about a slave owner who took advantage of his power to have sex with a child. Jefferson is at least a statutory rapist; given the fact that slaves had no ability to refuse consent, it's reasonable to consider him a rapist as well.

And yet, Zimmerman dreams about him—and Hemings too. "Though Jefferson was 46 when he bedded 16-year-old, lovely, yellow-silk-clad Sally at his grand hôtel, we see a passion between them," she gushes. The difference in ages, and power, is turned into a romantic fetish, in the vein of Kate Breslin's romance novel For Such a Time about a Holocaust victim and a Nazi camp guard, or of the billionaire bondage enthusiast in Fifty Shades of Grey. A 46-year-old owning a child, able to do with her what he will: that's sexy! Fantasize away.

Both For Such a Time and Fifty Shades were critically pilloried. Zimmerman, in contrast, is giving Thomas Jefferson Dreams of Sally Hemings an enthusiastic write-up at NPR, a self-consciously classy venue. The Jefferson/Hemings relationship isn't just a romance to swoon over. This is Jefferson, after all; a larger than life genius. He's not just some gross rapist who preys on children; he's conflicted, wounded, and aware of his own failures and contradictions. Or, as Zimmerman puts it, "author Stephen O'Connor gives us a brave and wondrous dream of a novel that renders the fraught subject of their relationship a fascinating, complex and ultimately extremely addictive tale." She adds, "These lovers are not cardboard cutouts"—like in all those crappy romance novels that you won't see reviewed at NPR, presumably. Instead, they are "deeply, engagingly human."

"Complex" and "deeply human" are two phrases you could probably cut and paste from Zimmerman's piece to just about any literary fiction review. The message of highbrow fiction, ventriloquized through thoughtful and tasteful critics, always seems to be the same—the world is complicated and beautiful, filled with depth and tragedy and wonder that will provide you with feelings. "Strip away the history in any historical novel and judge what is left," Zimmerman declares with predictable solemnity. Time is just a pomo playground; the author, as virtuosic master, scrambles it to show the universal in all of us. "The agonizing crashing together of love and slavery: O'Connor has the insight to put them side by side, and the result is searing and even sometimes beautiful." Isn't it always?

As an alternate view, maybe setting aside history in a story about slavery and racist violence isn't a great idea. Zimmerman's review asks you to appreciate dazzling intellect and insight—to be like Jefferson in your broad views, in the depths of your understanding, in the elevation of your taste. To fantasize about Jefferson is to fantasize not just about power, but also about wisdom and solemn, deserved authority. It's to fantasize that his flaws are not really flaws at all, since they add character and complexity—making his character more nuanced, his accomplishments more interesting.

Jefferson certainly was a genius—but he wasn't more of a genius because he had coercive sex with a 14-year-old. He was just another boring old slaver, hurting people in the same boring way as all his peers, because he felt like it, and because he had the power. I guess that's deeply human too, though not especially beautiful.