What are we supposed to do with this day? 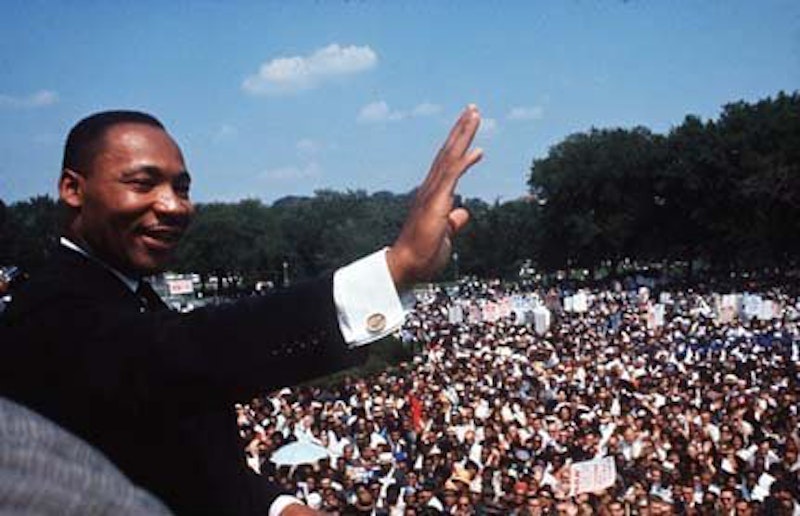 Yesterday I went to get donuts from my favorite Greenpoint donut parlor when a curious thing happened. I was waiting on line behind a guy (cute) who just ordered 35 donuts. That’s a lot of donuts! On his way out the door he stops and talks to one of his friends—this black girl—who was waiting at the end of the line. They exchange some pleasantries I don’t really get, but I definitely hear him tell her “Happy Martin Luther King Day” before he walks out.

“Happy” Martin Luther King Day? Is this what we are supposed to be saying now?

Not that it’s supposed to be a particularly sad national holiday or anything. But it’s just that, in all my years of being a black, never has anybody pulled me aside to wish me, personally, a “Happy Martin Luther King Day.” It’s just not something you’re supposed to say, is it?  Because it’s the same thing as pulling me aside to be like, “Whew, thank goodness you people finally got the right to vote!” Or maybe, “Hey, that whole segregation thing was kind of balls, huh? Good thing we nipped that in the bud!”

Look, I’m sure the guy meant no harm, but nonetheless the fact that he specifically targeted his black friend reveals a curiosity about MLK Day as a national holiday: what are we supposed to do with this day off and who is it meant for? Sears wants us to buy washing machines and microwaves, telling us we will save a whole $20 off of a $200 order. Some people will sleep in and wake up at noon to try and evaporate the weekend’s hangover. And I guarantee that more than one dining hall at more than one university across the country will be serving fried chicken, candied yams and greens, all delicious food I love but which can be served on any day of the year, not just Black People day.

MLK Day is, unfortunately, a holiday that carries little meaning for most people. A great many businesses and government officials—including Sens. John McCain and Jesse Helms—at one point or another did not even wish to recognize it as a real holiday. South Carolina, too, waited all the way until 2000 to sign MLK Day into law, becoming the last state in the nation to get MLK on as a full, federal holiday. Many universities will still hold class today, and perhaps some of you are even at work because your boss doesn’t give this day off. The result of all this questioning of the validity of the holiday is that MLK gets misremembered and we end up losing a piece of history in the process.

If you really want to celebrate MLK Day today, visit your local arts and community organizations which typically commemorate MLK Day by programming a series of events that highlight Dr. King’s influence and legacy or otherwise underscore the importance of community engagement and social justice. Beyond that you can find special, intercultural performances and talk backs about issues of diversity broadly speaking. For instance, my friend Koritha Mitchell, an associate professor of English at Ohio State University, will be talking about her new book Living with Lynching: African American Lynching Plays, Performance, and Citizenship, 1890-1930 on the Michael Eric Dyson radio show, and that hour-long conversation is sure to be something richly textured, historical, and soul feeding.

It’s unfortunate that more people don’t take the holiday seriously, treating it instead as a day to vacay without critically engaging with the reason we have that time off in the first place. This shows, as if we didn’t already know, that we are in fact not in a post-racial society, even if the media would like us to be. It shows that everything is not fine simply because we have a black family in the White House. It shows that progress is always a work in progress.