The semi-charmed life of a post-modernist Japanese author. 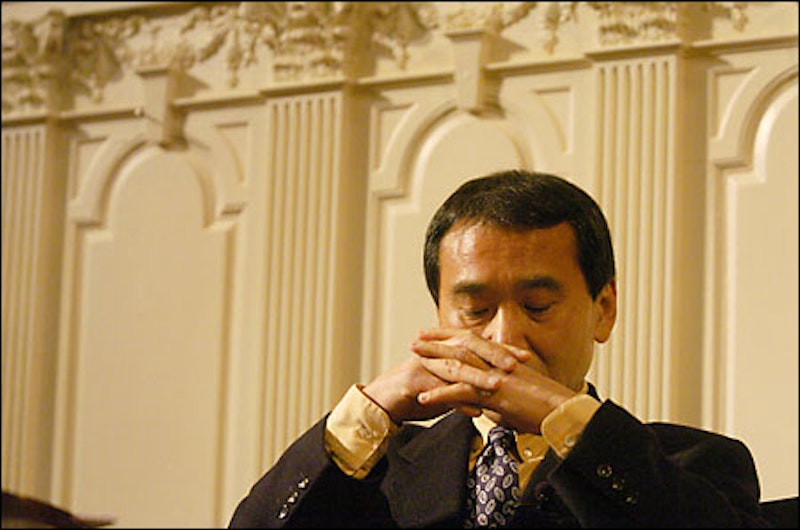 At a Starbucks somewhere in the American Midwest, a barista mistakes Haruki Murakami for the musician Keigo Oyamada, popularly known as Cornelius, a misapprehension Haruki Murakami does nothing to correct. This is not uncommon.

For casual, athletic, formal, and religious occasions alike, Haruki Murakami favors expensive Nike sneakers. It’s not an act of disrespect; it’s just that it wouldn’t occur to Haruki Murakami that he should wear anything else.

After receiving “a metric ton” of jazz-related fan mail, Haruki Murakami made a point of cramming his jazz LPs into Miles Davis’ childhood home and blowing it up.

It is not unusual for Haruki Murakami to receive strange telephone calls at odd hours. A young lady from Montreal complained that her dead aunt was beating her. A convalescent from Miami begged for enough yen to settle a smack debt. Sometimes these calls are one-sided bursts of manic laughter or muffled breathings that Haruki Murakami counters with a stoic, non-committal silence. Sometimes Haruki Murakami lays the receiver next to his pillow and goes back to sleep, counting psychotropic sheep flipping backwards over fences that look suspiciously like Olympic track hurdles. It has been necessary, on occasion, for Haruki Murakami to solve a murder mystery or intervene in the investigation of a kidnapping or perform an interventional diplomatic role in an international crisis.

Haruki Murakami and Shigeru Miyamoto are co-investors in a popular chain of mushroom-shaped sashimi kiosks.

Haruki Murakami visits a pet shop, contemplates a lizard. He learns that this breed of lizard is typically still for almost agonizingly long periods of time. He buys the lizard, brings it home, and names it “John Lennon.” Early afternoon gives way to evening, and John Lennon and Haruki Murakami sit quietly, unmoving, regarding a white wall with an intensity befitting images projected upon a movie screen.

On long book tours, Haruki Murakami watches Lost In Translation when he can’t sleep. “It’s like gazing into a mirror,” he confides to Film Threat. “It’s like lucid drowning.”

When revising manuscripts, Haruki Murakami has been known to listen to covers of John Cage’s “4’33’” on repeat, at high volume.