Al Sharpton Is Starving in Brooklyn

The host of PoliticsNation (MSNBC) dwindles away to nothing, right before our eyes. 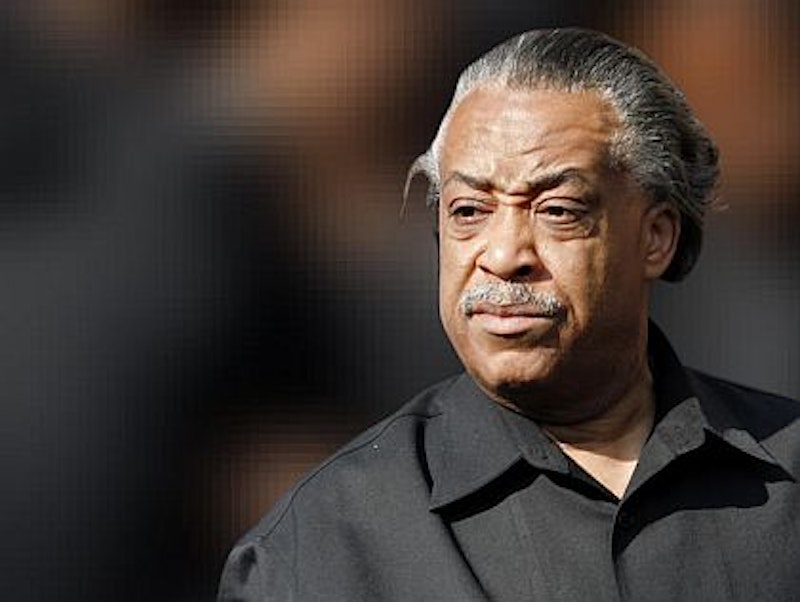 Al Sharpton is starving in Brooklyn. He straddles a corner, emaciated, trying to flag down a cab. A slicing, arctic wind blows. Al Sharpton is late for something or other, though it doesn’t matter what: a fundraiser, a protest action, a funeral, a civic engagement, a flight. Rancid cartons of Chinese takeout spill out of a dumpster, set upon by rats. A homeless gentleman is wandering along the avenue, weaving. A worsted charcoal-gray topcoat and a pair of Isotoners shield Al Sharpton from the bitter Brooklyn chill. Soot is everywhere, it seems, edifices impossibly imposing and gray. For a moment Al Sharpton, staggering slightly, is sure that the homeless gentleman will brandish a weapon and relieve him of his valuables.

But the homeless gentleman, shivering violently, shoves a rumpled bundle into Al Sharpton’s expensively gloved hands. “You need this more than I do, Reverend,” he mumbles, drifting away. The bundle turns out to be a half-eaten McDonald’s McGriddle breakfast sandwich; Al Sharpton leaves the sandwich in the back of the cab that eventually arrives, cradled in a 200-thread count silk scarf. Al Sharpton has not eaten in a month.

Al Sharpton is in-studio, on the air, addressing a large camera as though it were a demographically diverse group of strangers, a handsome suit hanging loose on his thinning frame. Al Sharpton is holding his hands in a way that suggests he’s ready to catch a football he believes you’ll throw him, but this is a tactic Al Sharpton uses to distract from his swaying; his pallor is shockingly pale, there are bags beneath his eyes the color of armadillo hides, he’s a shell of himself. Al Sharpton gestures towards a shifting montage of election-related images and phrases, and the contrast between subject and commentator could not be more striking. Even the Grim Reaper, lounging on the PoliticsNation set in a Rodarte cloak, sardonically voices a similar observation, which Al Sharpton pointedly ignores. The Grim Reaper bears a striking resemblance to Ron Paul, it occurs to Al Sharpton, who no longer can see his own reflection in mirrors.

Later, in the green room, Al Sharpton runs into Bill Clinton, Jesse Jackson and Spike Lee, who are comparing their Martin Luther King, Jr. Day itineraries. The four reservedly exchange greetings. Bill Clinton suddenly flashes on Al Sharpton’s cameo in Malcolm X, where a more fulsome, rotund Al Sharpton was a street-corner preacher. Spike Lee directed the film, and Spike Lee remembers this cameo at the same moment that Bill Clinton does, and they both take a break from talking to stare balefully at Al Sharpton, who’s nobody’s fool, and who is desperately, almost laughably hungry, for anything, just a bite or two, for the love of Christ. In a rhyming, profane cadence, Jesse Jackson is chewing somebody out on his iPhone. Al Sharpton is starving in Rockefeller Center.