Being a woman in America has never been more uplifting, fun, liberating and hysterical than it is right now. 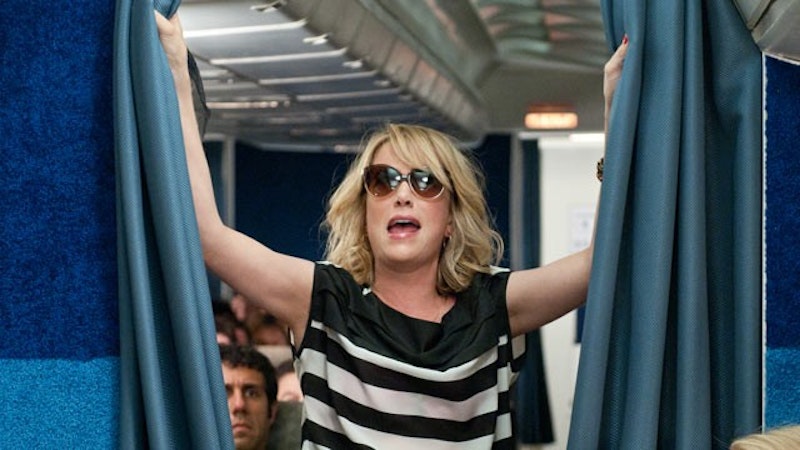 Catalog’s Ryan O’Connell recently pointed out that American culture is currently “obsessed” with girls, and looking back, 2011 was a year where American femininity was explored and redefined in popular culture.  As ideas about American femininity sprung up throughout the media in 2011, they captured public interest and were made manifest in a number of new female iconoclasts. This exploration of different feminine archetypes has been a liberating, cathartic and highly entertaining process.

When considering a few girl-focused Twitter handles that have gained tremendous popularity—ShitGirlsSay (now its own YouTube series), WhiteGirlProblems (a book), and SororityGirlProblems (also released a book)—it’s obvious that girls are getting made fun of more than usual these days. But what does this really mean?  O’Connell comments:

“Sh*t Girls Say has been called reductive and White Girl Problems is often accused of being racist and sexist… Whether it’s offensive or not seems almost beside the point. The fact is that they’re exposing a truth of some kind.”

Believing that the popularity of ShitGirlsSay and WhiteGirlProblems shows a misogynist trend in popular culture is to miss the meaning entirely. Not all girls are being made fun of here; these Twitter handles poke fun at a certain type of girl. The girl being mocked is shallow, materialistic and completely self-absorbed. She’s spoiled and anti-intellectual; wealth and privilege have rendered her selfish and oblivious. This girl is found on Gossip Girl and The Hills. She is the Paris Hiltons and Heidi Montags of the world. She is the Karadashians. Taking America’s present socio-political climate into consideration, some light is shed on why many might find the tweets of ShitgirlsSay and WhiteGirlProblems so humorous at this point in time:  The subject of this mockery is the clearly the result of hyper capitalism. She is representative of a society that’s excessive, out of touch, sheltered, and obsessed with appearances. Upon closer look, the tweets of WhiteGirlProblems bear a strong resemblance to the tweets of another popular Twitter handle, FirstWorldProblems, and the truth exposed in the humor is the same. The fact that many find mocking a hyper-capitalist feminine archetype is fun is not such a bad thing; it may indicate a society feeling aware and guilty of its insensitivity.

While the materialistic and out-of-touch woman was laughed at, other women were laughed at because they were genuinely funny. What’s significant about talented comedians like Kristen Wiig and Tina Fey is that men generally regard them as equally funny to their male counterparts. Sure, there have always been female comedians, but it’s rare that men would put a female comedian on the same level as their favorite male comics. In mainstream culture, the stereotype has been that girls aren’t funny. But then, this year, a film came out that busted down this stereotype. The film’s main cast was comprised of all women and the plot revolved around the ultimate female experience—a wedding and its impact on female relationships. This film was Bridesmaids.

The biggest triumph of Bridesmaids is not that it was the most hilarious movie of 2011, it’s that it took a female experience and made it palatable and funny to men. Men don’t typically like or laugh at movies designed to amuse women, yet they loved the movie Bridesmaids. Men don’t love Now & Then, they don’t love Divine Secrets of the Ya Ya Sisterhood, they don’t love The Help and they sure as hell don’t love Sex and the City. The last time heterosexual men loved a film about female experiences played out by an almost all female cast was... never. While we were all LOLing, Bridesmaids was bridging a popular culture gender gap.

As The Funny Girl was venerated by men and women alike, and The Hyper-Capitalist Girl was ridiculed, another major and unprecedented feminine archetype emerged: The Geek Girl. The rise of Geek Chic could be half attributed to Warby Parker and half attributed to our culture’s sudden appreciation and idolization of extraordinarily successful geeks like Mark Zuckerberg, Sean Parker and Steve Jobs. With the spotlight on Zuckerberg and Parker after The Social Network in late 2010 and the death of Jobs in October 2011, geeks have been elevated to rock star status in America. As a result of this, a funny cultural conundrum: it’s en vogue to be a geek which by definition means to not be en vogue.

Geekiness was formerly an unfavorable characteristic almost always associated with a man, but thanks to the current American nerd celebration, geeky is something American women would like to be as well. In November of last year, there was a conference of Geek Girls in Seattle (GeekGirlCon), and you’d be hard-pressed to walk around Manhattan these days without running into a gaggle of twentysomething ladies wearing thick-rimmed glasses, even if they don’t actually have a prescription.

Over the past year, the Geek Girl persona has manifested itself variously in a few figures that have risen to the forefront of pop culture and confronted American feminine standards. One such star is Kreayshawn, hailing from the Geek Mecca of northern California, who took YouTube and the music industry by storm in 2011 with her hit music video “Gucci Gucci.” One struggles to define Kreayshawn’s complex image succinctly–rapper, cinematographer, bisexual, punk, hoodrat—but the influence of geekiness is evident in “Gucci Gucci” via Kreay’s mini-mouse headband, ironically mismatched clothing, her companion’s oversized glasses, and her lyrical reference to Google maps. She also rejects and mocks the hyper-capitalist feminine archetype, reiterating throughout her song that designer clothes are for “basic bitches.”

Somewhere else on Geek Girl spectrum resides Zoey Deschanel, the immensely talented Hollywood starlet who demonstrated her geekiness this year with her successful, co-owned blog HelloGiggles. Deschanel is a gorgeous ingénue, yet something about her remains inherently geeky. She seems to have it all—natural beauty, multiple talents, style, grace, fashionableness, intellect, and humor, all while maintaining an indefinable element of quirkiness and intrigue. With this combination of characteristics, Deschanel could be the embodiment of the contemporary American feminine ideal.

Finally, 2011 ended with the release of an Americanized version of The Girl with the Dragon Tattoo. After months of nerd-loving and evaluation of American feminine norms, what better time to release Lisbeth Salandar, the trilogy’s geeky freaky computer hacker heroine, into American pop culture. Salandar is tech geek meets fem fatale meets Goth. She is the anti-Venus. Unlike Kreayshawn, Salandar isn’t exactly a geek with swag pumping out the ovaries, but she is revered for her IQ, keen intellect, intuition, and technological savvy. Her powerful redemption and cause of avenging abused and oppressed women signifies an emergence of feminine power and perhaps, an alternate feminine ideal.