The bland corporate mediocrity of a Super Bowl halftime show. 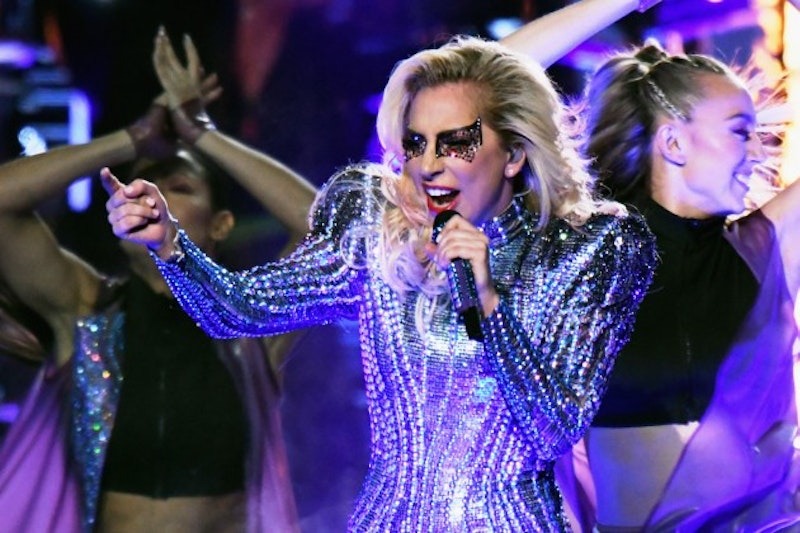 A decade ago, Lady Gaga organized her aesthetic mission around a bold affirmation: “Pop music will never be lowbrow.” With her Super Bowl performance last night, Lady Gaga surrendered to a condition that is worse than its opposite: Pop music will always be middlebrow.

At least a lowbrow Gaga would be interesting. I would’ve loved seeing her come out in a monster truck. Instead, we got Gaga at her most middling. Sunday night’s show was Gaga by committee, a keenly proportioned compromise medley designed to serve and legitimize the interests of corporate smorgasbord.

I wasn’t surprised. When I heard Lady Gaga was slated to perform at the Super Bowl, I knew what it meant. It meant that the Lady Gaga I once knew was dead, and that she wasn’t coming back.

The Super Bowl halftime show is bland monoculture per excellence. It’s our annual exercise in cultural standardization, an extravaganza of weak-minded enthusiasm and phony expression. It’s a place for aged rockers and inoffensive spectacle. It’s pop culture that feels like a family outing to an amusement park. To watch the Super Bowl halftime show is to share in the despair that Horkheimer and Adorno felt in the 1940s: “Culture today is infecting everything with sameness.”

Gaga sounded fine and played many of her most beloved songs. But the standard-issue aesthetic dimension of the show served as a painful reminder that in the crude intermarriage of culture and capitalism, even an obstinate aesthete like Lady Gaga must eventually submit to the assimilating machinery of mediocrity.

With 2008’s The Fame and its supplement The Fame Monster, Lady Gaga changed pop music with an aesthetic élan that felt like Paris Hilton via Matthew Barney. Today, it’s hard to describe just how exciting Lady Gaga was as a new artist, and the promise she held for the future of pop music. I’ll put it this way: around the same time, Barack Obama showed Americans how to hope again. Lady Gaga did the same thing for me.

Lady Gaga went on to make two very good albums, but her popularity declined precipitously. Born This Way sold less than half the copies that The Fame did, and her sales halved themselves again with ARTPOP. She was making great pop music, but it turned out that nobody cared.

Eye-roll emojis notwithstanding, Lady Gaga was always at her best when she was at her most pretentious. Unrepentant artistic overreach was her lane, and for a couple years it made her our most worthwhile pop artist.

But everything that made her Lady Gaga is gone. Gone is the meat dress, the alien egg capsule, the dermal implants, and the vomit artist. No more Catholic League censure, no more taboo sex stuff, and no more overindulgent pronouncements of aesthetic theory—the manifesto of Mother Monster, the reverse-Warholian experience.

As I sat watching Lady Gaga at the Super Bowl, I felt myself aged by many decades, as though I were watching some tacky revival of a vanishingly remote past. It was only a few years ago that she was relevant, but the Super Bowl showed just how far away we are from her reign as Queen of Pop. I hope we’ll remember the fun and fresh Gaga, the outrageous Gaga, the sexy and androgynous Gaga, the one whose career we loved to watch unfurl toward a sparkling poptimist future, and that we’ll quickly forget the sanitized android retiree we saw on Sunday night.