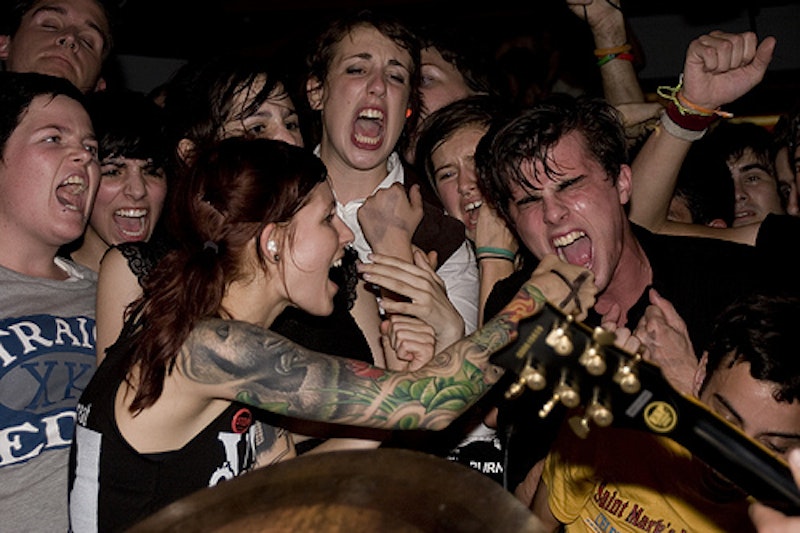 I'm not a huge fan of vegan straight edge, a sub-genre of hardcore-punk music. I came to it, originally, as a sort of sociologist. Many of the animal activists I looked up to, who got their start in the 1990s, were inspired by this cacophony. I wanted to understand what the fuss was about, so I might better fit into the political movement I sought to join.

I bought Ross Haenfler's book, Straight Edge: Hardcore Punk, Clean Living Youth, and Social Change. At about the same point, I was reading Tristram Stuart's The Bloodless Revolution: A Cultural History of Vegetarianism: From 1600 to Modern Times. Learning about practitioners of the vegan straight edge lifestyle—who abstained from intoxicants—in the former and vegetarian teetotalers in the latter, I was struck by the similarities between the two groups.

Clearly, there was some enduring desire among a segment of vegans and vegetarians for a kind of bodily purity. I couldn't really relate. For a significant portion of the time I've practiced veganism, I've subsisted on potato chips and cigarettes. I was suspicious of this purifying instinct. It seemed to reduce eating animals to a lifestyle choice. I was far more sympathetic to the aspect of vegan straight edge music that seemed to motivate activism for non-humans.

I loved Earth Crisis, probably the most popular band in the genre. But I also loved a more obscure group called Gather, named in reference to the anthropological term “hunter-gatherer.” A four-member band fronted by Eva Genie, Gather existed from 2004 to 2007, during which time they released a demo, a split EP, and one full-length album. But what the band's output lacked in quantity it made up in quality.

True to their genre, Gather was sonically abrasive. If you haven't acclimatized to it, the music can make your ears bleed. This goes not just for the band's instrumentation, but the vocals as well. Remember the beginning of Return of the Jedi, when Princess Leia is disguised as an Ubese bounty hunter? Wearing a mask, her voice is transformed into a guttural, alien growl. That's how Genie sounds. And it's amazing.

Gather's lyrics frequently championed illegal direct action on behalf of animals a tactic I don't think is the most productive, but is increasingly tempting in the era of Donald Trump. In "No Contest," Genie argues, "To say we can legally win this war is insanity/If it were another human holocaust we'd be preparing for battle undoubtedly." Similarly, in "Glimpses of Hope," Genie roars, "Cages cut open in the night/Animals run free for the first time."

Gather addresses government repression of animal activists in "The Green Scare." Genie shouts, "With phone tapping and harassing, spying and lying/Infiltration, entrapment, you try to weaken their commitment." Meanwhile, the group pulls no punches in its description of non-human exploitation. "I watched you take her baby away, product of her annual rape/He'll be tortured just like her, until they're both murdered," Genie snarls in "Dollar Signs to the Industry."

The band advanced progressive ideologies—ranging from feminism to atheism—but animal liberation was their most common concern. They were even skeptical of straight edge culture, which pleased me. In "Escalate," Genie moans, "Do you really believe that straightedge alone is going to do shit?/If drugs are the reason everyone's so passive, use your sobriety to act."

While I have strategic—as opposed to moral—reservations about some of the tactics Gather advocated, their work serves as fantastic pump-up music. The group's discography stands as some of my favorite pro-animal art, alongside the likes of Sue Coe's paintings and Rise of the Planet of the Apes.