Just Dance: Lady Gaga Versus Beyoncé at the Super Bowl

Some critics just don't know what to do about Beyoncé Knowles. 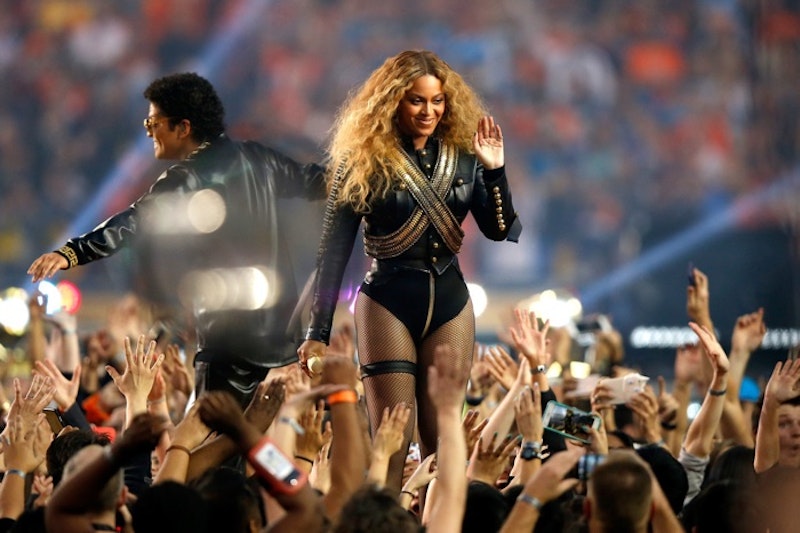 Here's what Chuck Klosterman had to say about I Am...Sasha Fierce:

In 2008, hyper-Christian DirecTV advocate Beyoncé Knowles released I Am...Sasha Fierce... The original hook of the album... was the concept of Knowles becoming... a character Entertainment Weekly described as her "sensual, aggressive alter-ego"... The whole thing seemed so unnatural and out of character that the only explanation can be strategy.

Klosterman concludes, "As an artistic creation, Sasha Fierce did not work. It only excites those who desperately want to be fooled." Having an alter ego "did not make her personality more complex; mostly, it reminded people that Beyoncé doesn't really have any personality at all." Greil Marcus comes to a similar conclusion: "You didn't have to have an opinion about [Beyoncé]; you only had to acknowledge her mastery, and it was impossible not to, even though the longer you looked, the less there was to see."

Both pieces preceded Beyoncé's new album Lemonade, but they could’ve easily been written about it instead of "Single Ladies" and the best of Destiny's Child. There's something unnerving about Beyoncé's whole approach, and it's palpable when you listen to Lemonade. For example, there's Beyoncé's irritating experimentalism. Various producers litter her album with EDM dissonance, resulting in songs that only make sense when she's actually singing, then go swooping and careening around drunkenly the rest of the time (for example, on "Forward," her bizarre collaboration with James Blake). There's also the entire song "Hold Up," where Beyoncé quotes the Yeah Yeah Yeahs verbatim, as though their 2003 song "Maps" is only important because she has chosen to (sort-of) cover it in 2016. Throughout most of the album, Beyoncé has nothing in particular she wants to say, and an infinite recording budget through which to filter all this nothingness.

It's not so much playful as it is bewildered. Having spent her whole life making art out of commercial imperatives, Beyoncé Knowles rises to a pinnacle of absolute artistic freedom, and adapts the only way she knows how: she gamely starts pretending to be an auteur. She even invents a personal drama involving her relationship with Jay-Z, one that would seem more authentic if she hadn't used the same vocal tricks and music video avalanche to promote Beyoncé's fantasy of a carnal, adoring relationship. Consider this: if the two albums had been released in reverse order, they would sound and look equally true. (First the doubts, then the make-up sex.) It's a sign of Beyoncé's flustered ambition that both albums are concept albums about marriage, staying on message on almost every track. You don't have to make soul records that way; on I Never Loved A Man (The Way I Loved You), Aretha Franklin simply channeled whatever emotions added up to the best song.

So much of Lemonade is awful, yet the album succeeds, thanks in large part to "Formation." This is remarkable because "Formation" isn't all that great, either, at least not on paper. It doesn't have a killer hook; it just has certain sections that Beyoncé sings more than once. (If you're wondering what I mean by "a killer hook," listen to her song "irreplaceable" and then try to get it out of your head.) What it has instead is a big drop, perfectly placed, and a hip-hop flow. Beyoncé speak-sings for half the song, only bursting into melody now and then, when the emotion and the beat overtake her. The effect is that of a soul singer with a gorgeous voice rapping because she has to, because singing is too pretty for the rough, hoarse affirmations she wants to unleash.

The lyrics are bad, which is almost a shocking thing to say in 2017, after countless articles have been written analyzing the song's lyrics down to every last comma. Supposedly they tell her story, but they do so comically, as if she's an omelette made of excellent ingredients. She has "hot sauce" in her bag, and by extension her blood. While it's certainly possible to analyze her word "bama," as "originally black slang for working class blacks arriving North from the South during the Great Migration," the word's connotations aren't essential to the song. For one thing, many listeners had no idea what she meant, except that she was taking something abject and making it proud. For another, Beyoncé's not "[un]presentable for white sensibilities," as the helpful explainer on RapGenius puts it. She is awash in elegance throughout the video, dressing in a mixture of antebellum Southern costumes and flashy modern designers. She wears Givenchy "recklessly."

The song works because the signifiers, densely packed as they are, give the critics something important to do. What makes the lyrics cohere is not really some sense of black heritage or critique of American racism; rather, what they have in common in that Beyoncé is famous, she knows it, and she can send us scurrying to the Internet and beyond to find out what she means. The song doesn't work organically, by speaking directly to the listener, but inorganically, as a laundry list of things that Beyoncé thinks someone like her should care about, since billions of people listen to every word she says. Is she making an important statement by setting parts of her video in a Katrina-like flood? In one sense, no, because her point isn't deep or clear. In another sense, though, the hurricane chooses her. She can't escape its imagery. She may not know what to say about Katrina—other than "it was tragic and surreal"—but she doesn't duck it.

To quote Courtney Love, Beyoncé fakes it so real that she is beyond fake. What comes across in "Formation" is her raw desire to say something political, to merge funk and poetry like Gil Scott-Heron or Common Sense. There’s an alchemy in every audience: the singer wants to express something, and we want to hear it, and that makes it real and dangerous. A confused, do-gooder survey of black and female experiences can be all the more authentic because it is awkward, inarticulate, and trying to be self-assured. Pop music is a confidence game, and it took infinite confidence to perform "Formation" on an unadorned football field, in front of the whole world, to an audience that had mostly never heard it. When Little Richard sang "A-wop-bop-a-loo-bam-a-wop-bam-boom," on the aptly named "Tutti Frutti," he was expressing a certain mood in the most universal and subversive way possible. Whether he meant it at all, whether it was real or not, is less important than the ways that it became real and expressive for us after we heard it. When Klosterman sniffs at people "who desperately want to be fooled," he is talking about the audience that takes every truly great pop song and makes it immortal.

The critics know this. If they really had a problem with fake gravitas, they would be hard on David Bowie. What Bowie is doing on "I Can't Give Everything Away," from his final album Blackstar, is similar to what Beyoncé accomplished with "Formation," but instead of seeing less and less there, the same critics find an infinite abundance. They prefer Bowie because he's cynical, counting up what he can't give away as a way to prove his generosity. In fact, Beyoncé's "Formation" is the exact opposite of another established and cynical classic, "We Didn't Start The Fire." Like "We Didn't Start The Fire," Beyoncé takes us through a montage of American history and current events, but unlike Billy Joel, she doesn't disavow it. She tries to claim it. It initially seemed weird to pair Beyoncé with Coldplay at last year's Super Bowl, but ultimately it worked because Coldplay caught "Formation" fever. Chris Martin was trying to unify the world with one song, and he really couldn't, and we loved him for it.

If it’s easier to love Beyoncé and Coldplay, but easier to respect Joel and Bowie, then no wonder Lady Gaga got loud, eager applause for her performance at this year's Super Bowl. She descended from the sky, in a costume clearly descended from Bowie, looking like something out of Swan Lake, if Swan Lake was a ballet about Komodo dragons. She perched on gigantic towers and stages, gazing down at her audience, begging them to appreciate the skill it took to perform acrobatics mid-song. She recited some of the Pledge of Allegiance: "One nation, indivisible, under God/With liberty and justice for all." Her voice was prim and hollow, as if she didn't believe in those old corny pledges, but thought they were beautifully phrased. She wasn't above saying the Pledge of Allegiance, was her point.

There was no escape from the seeping, horrible unreality of the performance. Gaga's backup dancers were wearing trash bags, basically, as if the whole joke couldn't be carried any further and had to somehow out itself as garbage. Audience members waved red, white, and blue glowsticks in a pantomime of unity; lighted drones swirled overhead, doing a better job than their human counterparts at responding to the pre-fabricated cues. When Gaga stutter-stopped her version of "Poker Face," she was denying us the song, like a teacher holding her class behind at recess: "I don't care whether we sing this song, or not, so you'd better behave." Her golden jacket, already as impossible for us as being reckless with Givenchy, was finished with sharp spines: celebrity as the sacred object who is impossible to touch.

This means that the only truly great moment in Lady Gaga's halftime show wasn't even music. It was the moment when Gaga plucked some awestruck, dumpy fan from the crowd, and hugged her. No spiny shoulder pads, no bullshit, just a hug. Meanwhile, Gaga continued to sing, even embellishing her notes. That's part of her job: to sing and hug at the same time. The difference is, when Beyoncé was singing, she was testing our limits. She was seeing if she would still get paid after "Formation." That courage makes a profound difference. Lady Gaga reached out and touched exactly one person. Beyoncé, though, got down on that football field and fumbled for something we were all trying to say.