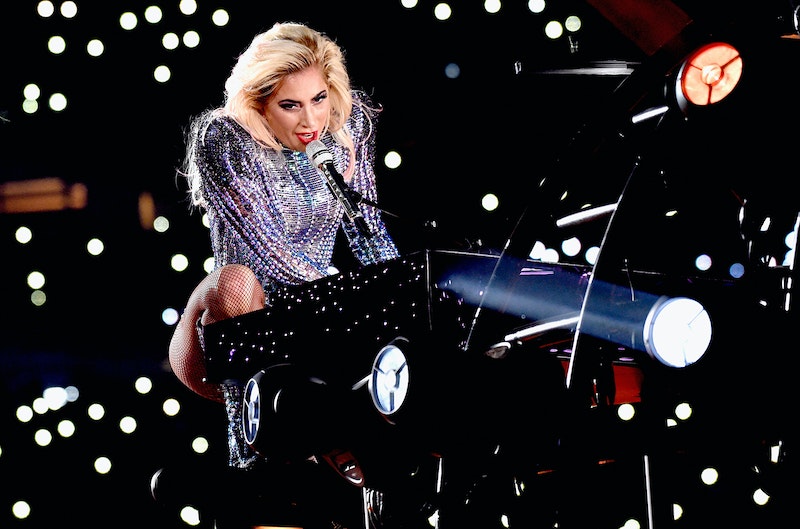 I honestly didn’t know the Super Bowl was happening until the day of—guess that tells you where my priorities are! So the first thing I did was find out who was performing at the halftime show because that’s really all I care about. Lady Gaga? That’s something I’ll watch. Could be cool, could be interesting.

In the battle of the divas—are you “Team Rihanna? Team Beyoncé? Team Taylor? Team Gaga?”—back in 2008/9 I was definitely a Gaga queen for a minute. I’ve loved her but I wasn’t necessarily that into her music. I loved her whole schtick. I loved the crazy outfits. Her 2009 Grammys red carpet look was OVAH! She was a master of what the cultural critic Daniel Boorstin called the “pseudo-event,” using fashion and outrageous style to force us to tune into her every move. And though I didn’t love her first album, the one with “Just Dance” on it, she totally grabbed me by my pumps with the dark opulence of The Fame Monster and tracks like “Teeth,” “Telephone,” and “Bad Romance,” which, for me, is one of the best pop songs ever written.

But by the time Art Pop came around I started to clock out of the Gaga experience. Or did I get tired of her because she was always in the news? A number of blogs and friends started to talk about how Gaga was “over.” She just didn’t do it for us anymore. The looks got tamer and she seemed, at least to me anyway, to be trying to find herself as an artist, rather than releasing confident content. Cheek to Cheek, her album of jazz standards with Tony Bennett, is the exception. It’s superb—much, much better than Art Pop.

Despite all the criticism she’s received over the years, artists should be allowed to make mistakes. They need to fail, release terrible albums and get bad reviews so they can continue to make the kind of work they most want to. Not everything is going to stick all the time, and that’s okay. I don’t mean to dwell Beyoncé versus Gaga—I don’t like to pit women against each other—but I think Bey offers a clear template about how to manage your career and take creative and music risks that pay off in the end. Beyoncé on the album IV is a much different Beyoncé than the one on Lemonade, her magnum opus, but she had to travel the distance between albums to get there. It didn’t happen overnight. Artists need free reign to experiment and try new things, and it makes sense why Gaga would want to do something different from what made us love her in the first place.

Gaga’s Super Bowl halftime show was streamlined, flawless, and well-executed, but what I loved about it was that it seemed like we got the old Gaga back. The Gaga who could sell us a box of toenails if she sang about it at the right pitch and put a fabulous boa on it, the one who set pianos on fire and put sequins into every crevice, the one who knew how to create exciting stage pyrotechnics. We already know Gaga can sing beautifully, but maybe what we forgot over the years is that she’s great on stage, too. Maybe not quite as fluid and Olympic and sickening as the B-word, but she can hold her own up there, in front of 100 million people, without guest stars and surprise acts and musical cameos meant to make us more interested in the performance. And that’s more than can be said about the wide majority of pop stars on the market right now.

Gaga is a confusing, if contradictory artist. She can sing live and perform wonderfully, but her music isn’t always the most interesting, exciting, or noteworthy. But maybe that’s what makes her tick after all, sort of like how I would never go to a Rihanna concert but I would put her on my Tidal, but I would go to a Lady Gaga concert but maybe not buy the album.

Rarely do I want an artist to stick what makes them so good, but not with Gaga. I want the old Gaga back!