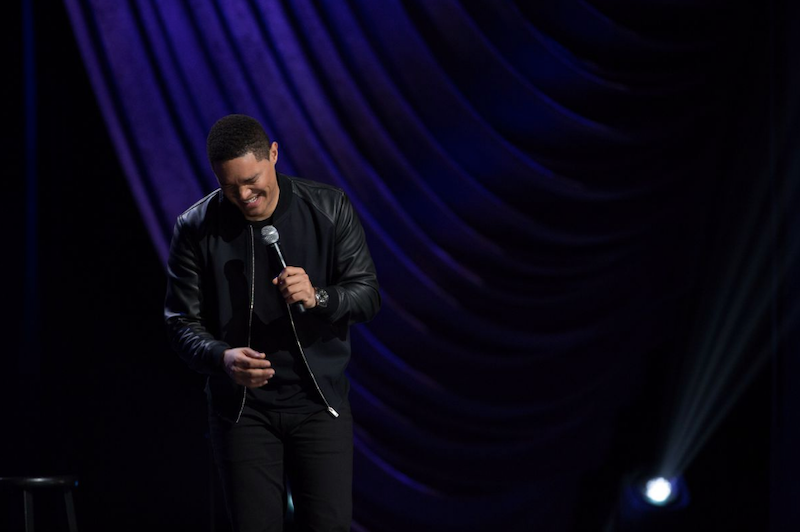 Trevor Noah does a white-guy voice that’s a shame. It’s standard, the same dull thing that’s been popping up since the first wannabe heard Richard Pryor. By now the voice has become a convention, with no entertainment value expected: here, this stands for White Guy Talking. Odd that Noah uses it, since his act is pegged to his perkiness, dimples and gift for voices. African, Scottish, Indian, Russian, posh English, working-class English, black American—they’re the spine of his act. Afraid of the Dark, his first Netflix special, opens with a blatting, robust “Noo Yawk” accent because the concert’s in New York. Doing it, Noah sounds like a hundred movies, but he hangs a good joke off that. “I’m walkin‘ here!” he says, acting out the famous scene. Then he confides that, because of the scene, he grew up thinking of New York “as a city of people almost getting run over.” Which it is, really, but the laugh’s still there.

Noah has come to America, or New York, to host The Daily Show, but he’s South African and his act belongs to the Commonwealth of Nations, emphasis on Great Britain. Noah’s American white-guy voice is off the shelf, but his Scottish white-guy voice is something he’s thought about. “The Scottish drink to die,” he notes. So their accent? The product of “centuries of trying not to throw up.” His act also gives a lot of air-time to Empire and its aftermath. Young people in the U.S., wanting to feel righteous, fasten on police brutality and white privilege, with Jim Crow and slavery off in the background. The young people’s Commonwealth counterparts make more of the past. After all, that past is one of the main things they have in common, since they belong to different races, continents and countries.

Noah’s post-colonial grousing strikes an outsider as a bit on the nose. A Brexiter (working-class voice) complains about the foreigners coming in with their own language and culture and taking over. “Sounds British to me,” says Noah. His act features a set-piece about the first British officer (plummy voice) arriving in India and getting told off by a wise-guy bystander (Indian voice). The bystander’s material is only so-so. How could a religion call a god “God”? And why would a country call itself “Great”? Noah goes on to say that the denizens of the empire came to Britain because of the name—they wanted to see what was behind the billing. This view of Commonwealth immigration is pretty much the one I had at age 19, when I briefly considered the matter during a survey course about post-war Britain. A few years later it hit me that employers in Britain played a role, that the country let people in because there were jobs to be filled. Noah may have that moment too, but so far he hasn’t.

The comedian seems smarter on The Daily Show than he does in concert. In fact on the show he’s a relief, given the swelling cluster of tics that Jon Stewart developed over the years. Noah, like his predecessor, is willing to make noise to goose the proceedings; unlike his predecessor, he doesn’t grab air-time simply to slather it with his presence. When he acts up, he tends to make the show more fun, not less. In addition, he seems like a bright young fellow who cares about political events in the U.S. and has decent points to make. He did well against Tomi Lahren—not the biggest adversary, but a start. In concert, he comes off as much the same man but minus a few IQ points and plus an overdeveloped need to please.