What will it mean in a cultural climate hypersensitive to gender politics? 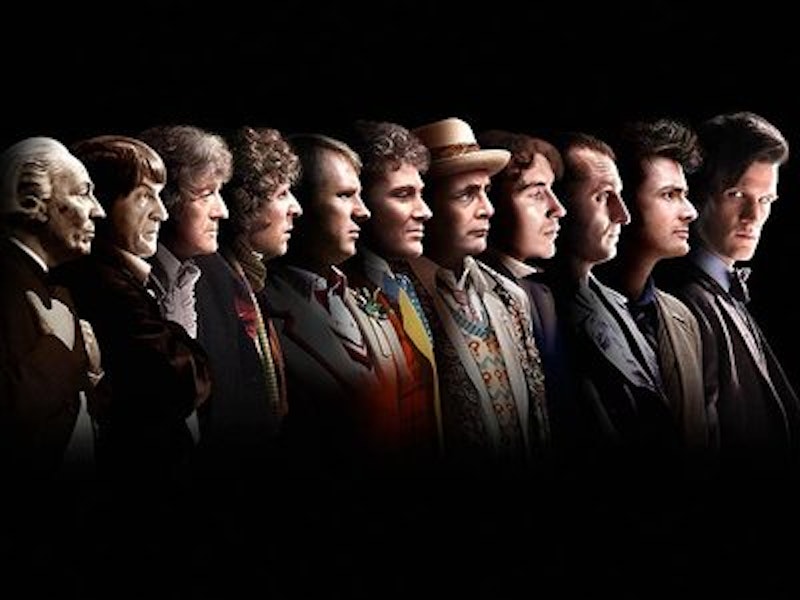 It’ll be months before we get our first glimpse of Jodie Whittaker as the Thirteenth Doctor in the Doctor Who Christmas special—and more than a year until the first female Doctor starts her first full season of television. Until then, we’ll have to make do with talk about the cult sci-fi series’ gender flip. The controversy is mostly made up; as departing showrunner Steven Moffat said testily the other day, the supposed hate against the lady Doctor was wildly blown out of proportion, not by misogynists but by the outrage brigades. That said, the Doctor’s sex change does raise some real questions. What will it mean, especially in a cultural climate hypersensitive to gender politics?  Are there valid reasons to dislike it?

In case you’re not up on the geek stuff: Doctor Who is a BBC show that’s been on the air since 1963, with a hiatus from 1989-2005. It’s a British institution and has a devout following worldwide. (I’ve watched it for the last five years, after Netflixing through the first six seasons of the revival.) Its hero, a humanoid alien who calls himself the Doctor, is a time-and-space traveler with a ship disguised as a 1960s British police box; he belongs to a species known as the Timelords, who have special powers over time. He’s an adventurer, an explorer, and an eccentric genius with a heart of gold—two of them, in fact. Saving people and worlds is what he does.

Oh, and when his body is damaged beyond repair, it regenerates into a new one. You see the possibilities.

Is there any reason this new body can’t be of a different sex? Some Whovians, not all men (geek blogger and feminist Sarah Pinault, for example) have argued that it doesn’t make sense biologically, since regeneration doesn’t change basic physiology. But do we really want to argue biological plausibility, given that the Doctor can change height, build, hair color and physical age, or re-grow a body part severed within 15 hours of regeneration?

In any case, it’s already Dr. Who canon that cross-sex regeneration exists. As far back as 2010, when the Eleventh Doctor (Matt Smith) made his first appearance, he briefly thought he was a girl. Three years ago at the end of Season 8, the Doctor’s fellow Timelord and longtime nemesis, the Master, returned as a “Timelady” who went by “Missy.” In Season 9, we saw a white male Timelord regenerate as a black woman. It felt like the show was setting the ground for a female Doctor. And while there’s little doubt that political pressure had a lot to do with it (Moffat already dealt with a nasty backlash in 2014 when the white and male Peter Capaldi was unveiled as Twelve), some people including the show’s creator, Sydney Newman, had lobbied for a lady Doctor decades ago.

Biology aside, writer and historian Varad Mehta has argued in National Review that the show will lose something essential with a woman as the Doctor because the Doctor is so “prototypically male.” While each Doctor has a distinct temperament, he always remains something of an eccentric or even mad scientist. He has little sense of social decorum and is often insensitive, domineering and brusque; he “doesn’t suffer fools gladly or care what others think.” Sometimes, he must make decisions that cost countless lives, to prevent an even worse outcome. Mehta thinks none of this would work with a woman: a female eccentric is not brilliant but pathetic, a domineering woman is seen as bossy and bitchy, a woman responsible for large-scale death is repulsive. Thus, he says, the show has put itself in an impossible bind: either the Doctor is no longer the Doctor, or the Doctor’s sex is just a gimmick and there is nothing special about womanhood.

With all respect to Mehta, whose opinions I’ve often enjoyed (and whom I know and like on Twitter), this is the kind of commentary that reminds me why, for all my dissent from modern feminism, I can’t get on the conservative bandwagon when it comes to gender issues.

Do I believe all sex differences in personality and behavior are a “social construct”? No. But I also think they’re a matter of degree and distribution, not Mars-versus-Venus absolutes. Men are from Earth, women are from Earth (unless they’re Timelords, in which case they’re from Gallifrey). Some traits are more typical of men, others of women; but both possess the full gamut of humanity. Demanding all-around 50/50 parity is foolish and coercive. Affirming that a woman can have traits more common to men and not be less for it—and vice versa—is the good and liberating part of feminism, gender egalitarianism, or call it what you will. And, for Gallifrey’s sake, individuality does not make womanhood or manhood any less special.

I also think people are far less biased than Mehta gives them credit for. (Oddly, he seems to agree with the Sisters of Perpetual Grievance that behavior tolerated and even encouraged in men gets women labeled bossy, bitchy or crazy.) Margaret Thatcher, to take a British example, has no shortage of admirers. Charismatic female eccentrics in both history and fiction long predate modern feminism (Auntie Mame). Xena of Xena: Warrior Princess had just about all the prototypically male qualities Mehta lists—brusque, domineering, lacking in social graces, emotionally guarded, burdened with a massive body count—yet she was and is a pop culture icon.

Closer to home for Who fans, River Song (Alex Kingston), a major recurring character since Season 4, is every bit as “bossy,” smart, eccentric, and sometimes maniacal as the Doctor. (She even calls herself a psychopath at one point.) A human who has some Timelord DNA due to being conceived in the Doctor’s spaceship (long story), she’s a time traveler, adventurer, and fighter in her own right, as well as a brilliant archeologist and scholar. Or, as one writer put it, “a more sexual, trigger-happy version of the Doctor.” Also, a fan favorite. If people can love River, they can love a female Doctor whose Doctorness remains intact.

So, no, there isn’t any essential contradiction between Doctor and woman that threatens to sink Dr. Who. But I do think there are gender-related pitfalls that may hurt the show, which, as Mehta correctly notes, is already suffering from recycled plots and stale ideas. One is hyper-vigilance about sexism.

Contrary to Mehta’s claim that the Doctor can get away with acting like a jerk if he’s a he, his overbearing and/or insensitive behavior is often not well received within the show. (Mehta himself notes that the Doctor’s human companions often have to coach him to act more human.) I think most people won’t mind a female Doctor being arrogant, brusque, or insensitive. But will politically aware critics and keyboard warriors be fine with a female Doctor being disliked or even punished for it?

The other day, I re-watched the Season 4 episode “Midnight,” in which the Tenth Doctor (David Tennant) is stranded on a futuristic passenger space shuttle facing deadly danger. When the pilot and co-pilot are killed, he takes charge, curtly telling skeptical fellow passengers that it’s “because I’m clever.” It doesn’t go over well, and as tensions escalate they gang up on the Doctor with almost fatal results.

Now, imagine that the Doctor in this situation is female. Or reverse the genders in the post-Season 4 Tennant special “Waters of Mars,” in which the Doctor starts to see himself as unstoppable and nearly godlike until a woman horrified by his arrogance of power dies to stop him. Cue the cries about the show putting an uppity woman in her place.

Or take the Season 3 two-parter “Human Nature/Family of Blood,” in which Tennant’s Doctor has to adopt a human persona for camouflage, becoming an ordinary schoolteacher who falls in love with the school nurse; when he must return to being the Doctor and give up the hope of a normal life with her, it’s treated as a tragic sacrifice. What’s more, after he’s restored, the brilliant but chilly Timelord is harshly rebuked by the nurse, for whom the humble schoolteacher was by far the better man. Try a gender-flipped version, and it would be denounced as an anti-feminist propaganda tract.

But that’s not all. Despite his stereotypical maleness, the Doctor is also compassionate and capable of intense attachments. Will the female Doctor be allowed to put compassion and love above everything else without provoking complaints about stereotypical femininity? And what about the Doctor’s relationship with his—and now her—human companions? The women who’ve filled that role have more than once saved the day, and the Doctor himself. They’ve also had to explain basic Earth things to him and keep his ego in check. Will Doctor Who take flak for making a male companion too equal to the female Doctor, the way Wonder Woman has been zinged for making American officer Steve Trevor too equal to the super-heroine? Will there be gripes about the Doctor getting “mansplained” to? (See, again, some of the reactions to Wonder Woman.)

Also, on one point, Mehta is entirely correct: anyone, critic or fan, who doesn’t care for Jodie Whittaker’s Doctor will likely get slammed as a misogynist. (On the other hand, no one will care if I say I’ve never warmed up to Smith’s Eleven.) Disliking Doctor Who’s new season will probably be suspect as well. In The Weekly Standard, Hannah Long predicts the casting of a female Doctor will “insulate the show from any artistic criticism” by turning it into a progressive cause. That’s a lot of people walking on eggshells: the show’s writers and producers, the critics, and the fans.

What’s more, given that Doctor Who’s gender switch has been so openly politicized, it inevitably opens the door to more identity politics. Feminist culture critic Anita Sarkeesian tweeted in praise of the “victory” but went on to criticize the show for remaining  “overwhelmingly white” and failing to address other “issues of representation”: “It’s not as if you fix the ‘woman’ problem, THEN the ‘race’ problem, THEN the ‘queer/trans’ problem, etc. It all has to happen in tandem.” Since Sarkeesian is in the habit of commenting on things she doesn’t know much about, she may well be unaware that the Doctor’s last companion was an actual black lesbian, or that Season 3 companion Martha Jones was black, or that several recurring characters have been gay or bisexual.

If anything, quite a few people—ones who are not crusty old anti-diversity reactionaries—think that Doctor Who has already gotten too heavy-handed with “representation.” A friend of mine who’s very much in favor of more, better female characters (we met on a Xena fan board) rolled her eyes at the female Doctor announcement for precisely that reason.

Personally, I like the idea of a woman Doctor, and can’t wait to see what Whittaker, who was excellent in the BBC detective drama Broadchurch, does with the role. (Though I would have preferred Lara Pulver of Sherlock and Robin Hood BBC, or—a truly bold choice—Who’s own Catherine Tate, who played beloved companion Donna Noble in Season 4.)  However, I do wish that making the Doctor female had been a freely made creative decision, not a forced political one. It’s too late to change that; but I hope, at least, that the writers will treat Whittaker’s Doctor as they would any other and not worry whether something may be “problematic” due to her gender.

And if the Doctor ever accuses anyone of “mansplaining,” that’s the last time I’m tuning in.