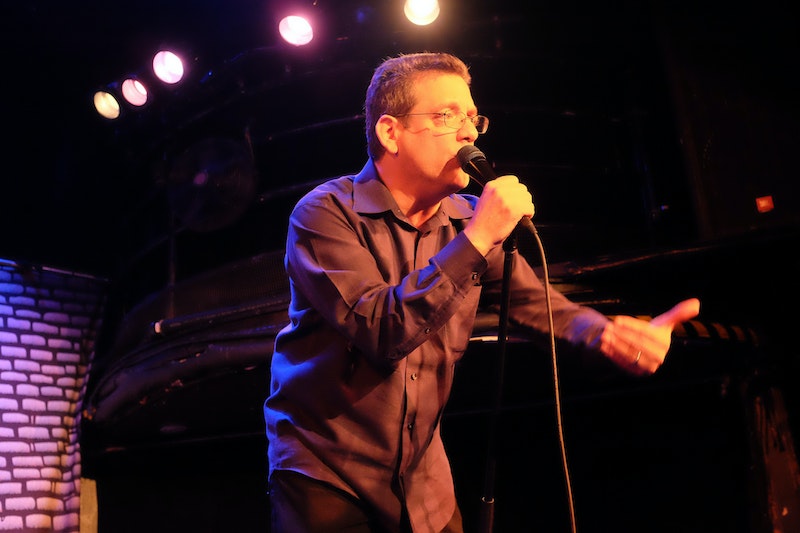 On Friday, comedian Andy Kindler, self-appointed ombudsman of comedy, gave his 22nd annual State of the Industry speech at Montreal’s Just For Laughs comedy festival. The 60-year-old comic allegedly has his finger on the pulse of the comedy world, and this is his platform to call out comics who don't pass his muster. He gives no applause for jobs well done, however. He's there to dump on his fellow comics, all of them much more successful than he is. You might say Kindler is a negative person with serious anger issues, something even he wouldn't dispute.

The room wasn't full, as Kindler himself was to point out, joking about his “Half A House” tour. Stand-up comic Guy Branum introduced him with some opening painfully accurate remarks about Kindler’s complaining nature and his inability to connect with audiences after 30 years of trying. Kindler then took the mic and immediately began complaining loudly about the sound system, throwing in some mangled French for what he apparently believed was comic effect. I’m not sure how saying you'd like some towels (“J’aimerais des serviettes”) in the local language is supposed to be funny, but I don't consider myself an expert in the technical construction of a joke.

Maybe the speech should’ve been re-named “The State of Ricky Gervais” to reflect Kindler’s obsession with the British comedian. He didn't waste much time getting around to that, after a couple self-deprecating jokes about his career. Gervais is “such an asshole,” Kindler said, while telling the audience he was about to tweet him, “Hey Ricky, Derek still sucks.” Derek is Gervais’ 2012 comedy-drama television series that Kindler regularly tweets his scorn for. The Brit funnyman got two Emmy nominations and a Golden Globe nomination for the show. He’s had a number of his own shows, including the spectacularly successful original version of The Office, while Kindler has provided the voice for a character on the animated Bob's Burgers and had cameo appearances on Everyone Loves Raymond. One can't help wonder if jealousy is a factor in his one-sided fixation on Gervais. Also, Gervais couldn't respond because Kindler blocks him on Twitter, which is ironic given that Kindler’s tweeted hundreds and hundreds of insulting and often dishonest tweets at Gervais, who never responds. Tweeting at someone you've blocked, besides being a weasel move, is also a violation of Twitter TOS.

Kindler continued his speech, talking about how he has Twitter “issues.” When you use social media incessantly to tweet scorn at someone you’ve despised for years, that’s an issue. Kindler told the audience that he goes to a therapist twice a week and that he's on antidepressants. “The oldest Jew ever to go into therapy.” That's not a bad line—probably his only good one in the otherwise lame set.

This one was painful, and the discomfort was heightened by Kindler’s comments after jokes that bombed. He noted that the audience probably sees him as a rage-filled Jewish small man, which was probably his most accurate self-assessment of the speech. And the speech was falsely advertised, as the comic from Queens, New York didn't talk much about the state of comedy circa 2017. He did mention that Chris Rock makes 30 minutes of comedy into a one-hour special by repeating everything for emphasis. He mentioned that he didn't like Jeff Dunham because of his “Achmed the dead terrorist” comedy routine, slammed Jimmy Fallon for his obsequious style, and hammered Steve Harvey for his absurd memo telling his staff not approach him while he's in the makeup chair.

I got the feeling that Kindler was just going through the motions while gearing up for an assault on the object of his obsession, and that’s what happened. The time had come for what he'd come to Montreal for. “The reason I mock Gervais is he's a narcissistic asshole who hasn't been funny since half the Extras shows,” Kindler said, referring to Gervais’ two-season HBO comedy series. “All he does is brag, and comedians aren't supposed to brag,” he added.

Then Kindler got to why Gervais really gets under his skin. “If you want to be an atheist fine, but I believe in God,” he said in a tone indicating this was no longer comedy. ”I believe there's something larger than us, but assholes like Ricky Gervais say you have to prove it to us.” Kindler bizarrely broke into song with, “Andy this isn't going to go over well. Either they like Ricky Gervais or they don't want to hear it.”

Then Kindler descended from shrill to embarrassingly dumb with, “Being an atheist is not scientific. Nobody knows what happens when you're dead.” That's correct, and Gervais, as an atheist, isn't saying he knows what happens. It's hard to believe someone in his seventh decade doesn't understand something so elementary. It makes you wonder about his grasp of reality.

But it got worse. Kindler made the claim that Gervais is a New Atheist, though Gervais doesn't self-identify as such. He then stated that New Atheists hate people because of their religion, that they “hate” Muslims, and that hate crime against Muslims is up 91 percent. With verbal sleight of hand, he was saying that Gervais hates Muslims and is contributing to a crime wave against them. This is character assassination. Gervais has never said a word against Muslims on Twitter or elsewhere. If he had, the media would’ve been all over it.

Kindler’s known as a comedian’s comedian, which you’d think would mean something like “smart.” That's not the word that came to mind listening to this tedious, unfunny, and slanderous speech. “Self-involved,” “boring,” and “vicious” did though. Kindler’s supposed to be keeping comedians honest or holding them to standards, but what he's doing is using the annual sinecure Just For Laughs has granted him as his personal bully pulpit to slime people who don't meet his politically correct ideals. To falsely imply that another comedian hates Muslims is itself an act of hate. It's cowardly and irresponsible.