It’s why people hate us. 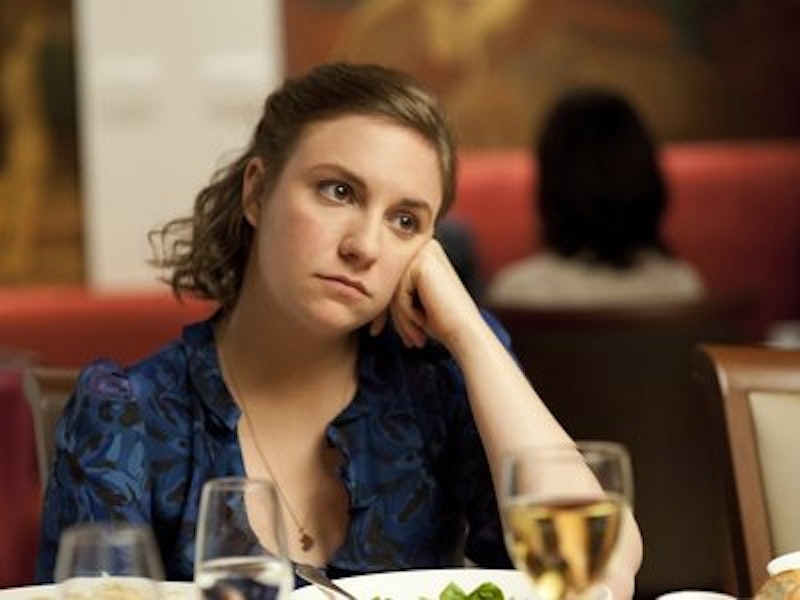 Another conservative has attacked Lena Dunham. This time it’s National Review’s Kevin Williamson, who in a National Review story launches a jeremiad against Dunham, an actor, director, writer and activist.

It’s a tirade that would be considered excessive by Cotton Mather.

Conservatives need to give the Dunham-bashing a rest and stop attacking artists. It’s hypocritical and makes us look like philistines. Williamson itemizes Dunham’s privileged background, down to her doctors, where she lives, and the summer camp she attending as a kid. Williamson accuses Dunham’s parents of “child abuse” by being over indulgent with her. He calls her a liar and her writing “gutless and passive-aggressive.” This paragraph is representative of the entire piece:

Lena Dunham may truly be the voice of her generation: The enormous affluence and indulgence of her upbringing did not sate her sundry hungers—for adoration, for intellectual respect that she has not earned, for the unsurpassable delight of moral preening—but instead amplified and intensified her sense of entitlement. The Brooklyn of Girls is nothing more or less than a 21st-century version of the Malibu Barbie Dreamhouse, with New York City taxis standing in for the pink Corvette. Writers naturally indulge their own autobiographical and social fantasies, from Brideshead Revisited to The Lord of the Rings, but Girls represents a phenomenon distinctly of our time: the fantasy not worth having.

I don’t mind Williamson’s criticism as much as the dogmatic ability to concede that Dunham, the director of an acclaimed film, a bestselling book, and the writer and director of the TV series Girls, has done anything difficult. Reading Williamson I had a memory from when I was in college and my brother was an actor. It was 1988 and he was starring in How I Got That Story, a play set in Vietnam and for which he’d win the Helen Hayes Award for Outstanding Washington Actor. I remembered the night I saw the play, when I was backstage and saw my brother come off stage after his curtain call. He was drenched in sweat from head to toe. A stagehand tossed him a white towel.

I realized right then that acting and directing is hard work. So is writing a book. What Lena Dunham has accomplished, not only with Girls but also with her film Tiny Furniture and the book Not That Kind of Girl, require exceptional skill and dedication. I don’t think Dunham is right on any political or social issue, right down to her choice in clothes. But there’s no doubt she’s a talented and hard-working artist. How many films has Kevin Williamson directed? Or scripted?

There’s a pretty big irony here. You have artists who attempt to create something that can have a huge financial playoff, but requires a lot of sweat and long, tedious days. It’s like starting a business. Opposing them is the conservative pundit who owes his career to his family or who has his feet up at a fully-funded Washington think tank lecturing actors on the meaning of struggle and hard work. In their own way these conservatives are a version of the special snowflake students they criticize on college campuses. Both have established an ideological cocoon around themselves that doesn’t allow for different ideas or the acknowledgement of the struggle of those they disagree with.

If the left does own the popular culture, it's because, unlike us, they worked hard for it. For the entire 20th century, beginning with James Joyce’s Ulysses, liberals have been the great artistic entrepreneurs. They founded magazines like The New Yorker and movie studios like United Artists. Orson Welles put on groundbreaking plays in the 1930s and in 1940 spent 18-hour days filming Citizen Kane. The Beatles worked all-nighters in Hamburg, playing until they had blisters. Jann Wenner turned a $7500 loan into Rolling Stone magazine. Punk rockers toiled in basements, risking destitution for the chance at creating something immortal. And Lena Dunham was 24 when she wrote and directed Tiny Furniture. Go ahead and hate her and the film. Then shut up and make a better one.

It’s the language of film, television, music and novels that touch people’s souls, providing them with the myths—both real and fake—that shape and guide their lives. We all have a pantheon of artists who helped make up who we are and what we love. Growing up I went from Marvel Comics and the genius of Stan Lee and Jack Kirby to The Lord of the Rings and Dostoyevsky, from the Who to Philip Glass and Beethoven. Artists become like lovers to us, providing vision and compassion and the thrill of breaking into new spiritual and aesthetic territory. I always say that one great film is worth a thousand position papers from the Heritage Foundation.

As liberalism grew ascendant in the popular culture of the 20th century, conservatives simply began reacting to it. We did not support artists or attempt to make films of our own. To some extent this is understandable: the left's cultural revolution is hegemonic, and it’s necessary to respond to it, and that can be a fulltime job. But at some point, after yet another piece bashing Lena Dunham—or Susan Sarandon, Sean Penn or Ben Affleck—we look less like brave critics and more like ignorant and envious knuckle-draggers.