Couples Therapy for Bart and Chris 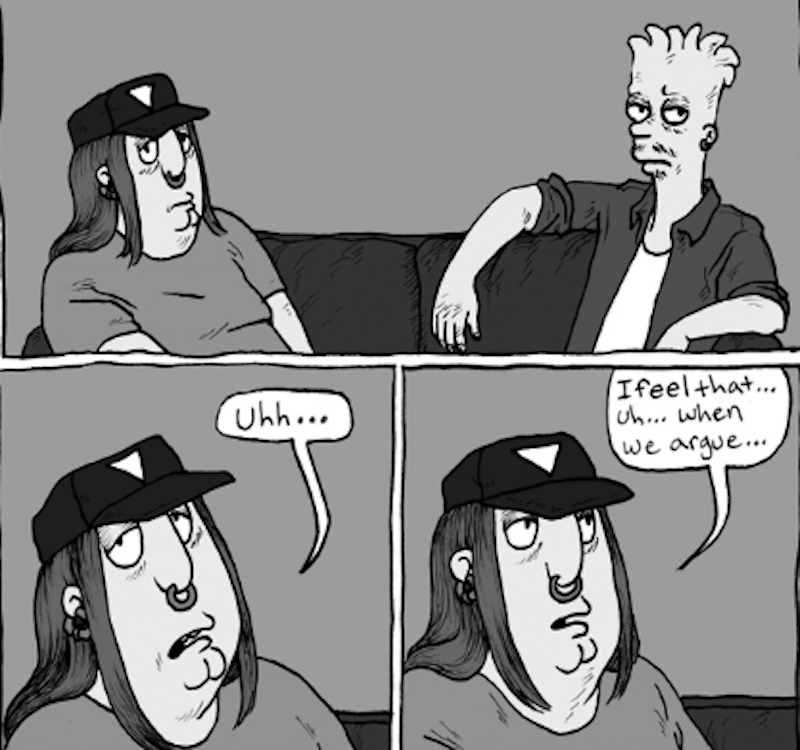 Bart, as you might expect, has grown a mustache that’s repulsive. It’s a widow’s creeper and it hangs down his upper lip, each hair so huge and self-sufficient that together they’re like tines of a rubbery, malformed rake. Back in the 1990s, William Bennett predicted that adult Bart would be a burnout and a loser. Looks like he is. He’s slumped now. All his energy is gone and he’s looking into a void. He’s looking at his life.

What he finds is violence. “My dad was an abusive alcoholic, or whatever,” he says. “He’d go to the bar, come home drunk, find out I’d fucked up at school, and he’d choke me out.” Bart is in couples therapy. In couples therapy with Chris from Family Guy. We find this out panel by panel, one reveal after the other. The therapist is Bobby Hill from King of the Hill (“And y’all say this is affecting yer relationship?”).

Adult Chris is stuck in a mess a lot like Bart’s. “My parents beat the shit out of my sister,” he says. “Dad would make a joke about how worthless she was and push her down the stairs, and just… laugh. And I did it, too.” Bart, on looking back, explains how he used to act out: “I guess I was always thinking that one day he would hurt Mom or L--- or M-----. If I pissed him off, he’d only hurt me and that was okay.” Chris explains how he used to abuse his sister: “It’s just what my family did. When I did realize it was wrong, I got scared. If I didn’t hurt M-- too, maybe they’d start hurting me.”

By contrast, grown-up Bobby seems wonderful. He’s squeaky-clean and wears a tightly-knotted tie, but his emotions are out and free. His woeful inverted kidney of a mouth soaks up his clients’ hurt. When things go right, his face becomes radiant. Bobby is delighted to walk Bart and Chris through the “I feel” procedure for expressing hurt in therapy. He’s delighted all over again when the method pans out. “That was awesome!” he says. “You guys are already doing great work!”

The two slumped dirtbags have opened up. “I get scared you’re gonna hit me,” Chris said. Bart said, “You’re so nice and I’m such a fuck-up. I just… You’re gonna wise up one day and leave me.” Chris: “I want to be with you. I choose to be with you.” They have rebuilt their love right there on the couch.

“We love work that re-contextualizes the touchstones of our modern culture,” says Unicorn Booty, the site where I found the cartoon. The trick here is the same as with grim-and-gritty superheroes and revisionist Westerns. Old hijinks are taken literally. Why were those cowboys always shooting each other? They were brutes. Why does Batman go out at night in a cape? He’s crazy. What happens when a father lays hands on his children? Abuse.

This trick, revisionist literalism, used to be a way of showing up the old stories or finding some new fun in them. I think neither is the aim here. I can’t speak for anyone who would call themselves Panic Volkushka, but it looks like Bart, Chris and Bobby are being brought in to hustle painful ideas past our defenses. If so, it worked on me. Look at those wretches—the adult Bart and Chris—and listen to their familiar stories re-spun, and it’s easier to feel that abuse happens and lives get blighted.

Then we see the creeps engage. Watching their therapy, I was reassured that characters so ugly could try to build something. They’re scabby-faced caricatures of cartoon brats, and the cartoon brats were supposed to be vulgar and semi-unpleasant to begin with. But adult Bart and Chris talk the therapy talk that was a joke when The Simpsons was young, and they decide they’re worth something because they care about each other. Family Guy I’ll leave to one side, but The Simpsons, good therapy and Panic Volkushka’s cartoon are all engaged in the same work, that of making something worthwhile out of the deeply unpromising material that is life as lived by most humans. It’s ugly work but it’s funny, and it will never end.