Francis Bacon, that is. 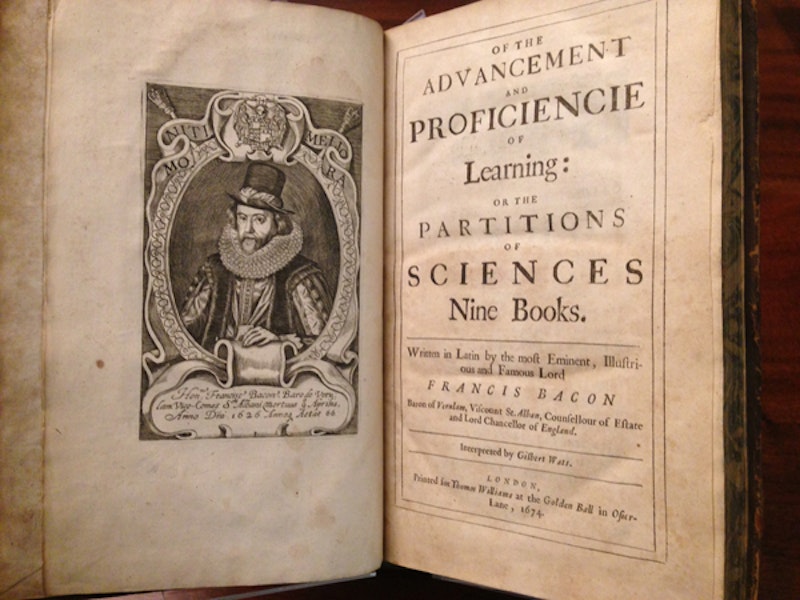 We’re fast approaching the 400th anniversary of the scientific method. It’ll be embarrassing if in that very short period, we destroy the world.

I’m as big a fan of the scientific method as Francis Bacon was when he first outlined the idea—skepticism and constant experiments to avoid self-deception—in his 1620 book Novum Organum. But intellectual honesty compels me to admit that the manifest benefits of our rapid progress since then are no guarantee that something won’t go horribly wrong to make us regret this whole era, such as our extermination by artificial intelligence.

Having just written a book, Libertarianism for Beginners, which is very friendly toward competition, markets, industrialization, and scientific advancement, I had vaguely imagined I’d slowly roll out any minor second thoughts and counter-arguments over the course of a decades-long career of intellectual maturation. But the constant acceleration of progress keeps making me think it may be best to say everything that is on one’s mind immediately—in what may be the short time left before the robots batter down the door or we all become cyborgs or socialists or whatever. Things change quickly these days.

And make no mistake, we do live “in the future” now. I just noticed this year is the 20th anniversary of Craigslist, for instance. I know full-fledged adults who probably think of it as being as much a part of the natural landscape as I do color television.

That old-fashioned machine still sometimes offers frightened oldsters like myself material that is probably good, gentle preparation for our extermination and/or transformation by A.I. or mindboggling biotech. Take the recent Syfy adaptation of Arthur C. Clarke’s Childhood’s End. I was a bit surprised by how effortlessly the classic mid-century sci-fi novel, turned into TV, straddles the line between seeming like a sophisticated glimpse of the “singularity”—our eventual, likely inevitable, evolution into beings we cannot comprehend—and seeming like Left Behind or some other genuinely-Christian depiction of the Apocalypse.

The religious parallels seemed somehow subtle on the printed page, but with special effects and weeping actors, it looks like it’s simply the old-fashioned end of the world for which our ancestors prepped for thousands of years. And maybe there really isn’t that much difference. If the things about humanity we now treasure—not all the petty details but at least the capacity for joy and original, independent thought—vanish, it won’t much matter whether it’s demons, aliens, robots, or the hivemind that did us in.

To our successors, our old prophecies may appear roughly accurate. “They had foreseen their own weeding-out by the Great Filter,” the A.I. will say of us eons hence, “and still they failed to prevent it. Like those stupid pandas that show barely any interest in mating, I suppose they deserved their end.”

Arthur C. Clarke, then, ends up having been good prep for thinking about the A.I. singularity even though he wasn’t technically writing about that event as we now conceive it. Still, whether in the form of a civilization-altering Monolith, a hostile onboard computer in 2001 or humanity’s potential absorption into a cosmic overmind in Childhood’s End, he was providing good training for dealing with the unsettling prospect of changing into or being changed by inhuman things (which was also a trope of the Agents of S.H.I.E.L.D. season finale, but I’m not pretending that’s quite as sophisticated).

Bacon and Clarke both loved science—though, interestingly, Clarke also had an often-forgotten fondness for paranormal investigations and hosted a TV series about them when he wasn’t doing things like conceiving of the first telecommunication satellite. Clarke, like most of us four centuries after Bacon, had come to regard science’s capabilities with awe, but we who have been its big boosters would be remiss if we pretended this awe contains no element whatsoever of fear.